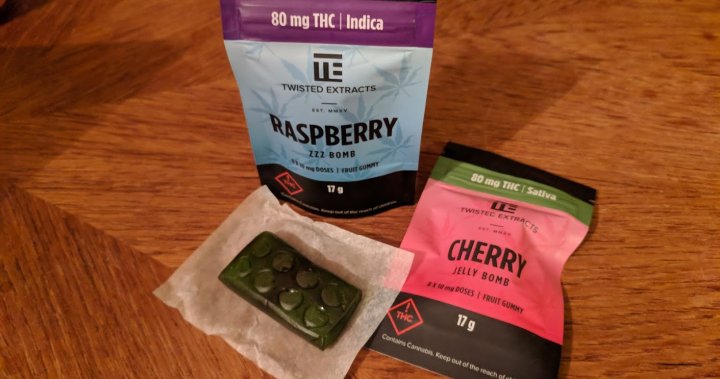 Parents are being reminded to take a little extra time to check their children’s candy, as the province marks the third Halloween since cannabis edibles became legal.

It is not common for cannabis candy to turn up on Halloween, but it has been known to happen in British Columbia.

In 2018, they were accidentally handed out to a Victoria trick-or-treater, and Delta police announced charges against two people earlier this week who allegedly handed them out at Halloween 2020. In both cases, the cannabis candy was spotted by alert parents.

In a warning issued Friday, B.C.’s Ministry of Public Safety said parents should keep a particularly sharp eye out for unlicenced cannabis candy.

Legal cannabis edibles are strictly limited in dosage (maximum 10 milligrams per package) and to plain packaging.

The province warns that illegal products could have brightly-coloured packaging that mimics popular candies, and can also contain much higher doses of THC, the psychoactive chemical in marijuana.

Kayley Nelson, assistant manager with Vancouver’s Evergreen Cannabis, said adults who have edibles in their home should take precautions to keep them secure.

“Keep it locked away, keep it out of reach,” she said.

She also encouraged consumers to always buy legal products, which have been quality-checked and vetted by Health Canada.

Read more:
Tricky treats: What parents should look for to keep weed gummies out of trick-or-treaters’ hands

Legal products also come in secure packaging that increases their safety, she said.

“If you’re checking your kids’ candy and making sure nothing is oddly packaged or unwrapped and doing your due diligence, it really shouldn’t be getting into your children’s hands.”

According to the B.C. Drug and Poison Information Centre, edible cannabis exposures in children doubled in 2020 compared to 2019.

Symptoms of accidental ingestion of cannabis may include appearing unbalanced, uncoordinated and drowsy or sleepy, and in extreme cases where a very high dose was consumed, could include difficulty breathing.

Anyone who believes someone is having a cannabis-related medical emergency should call 911 or the Drug and Poison Information Centre (1-800-567-8911).