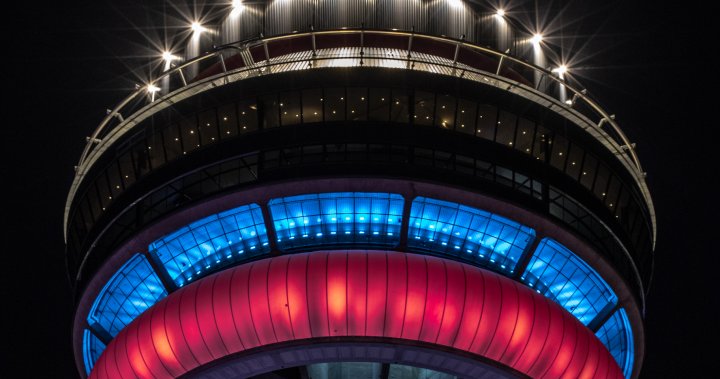 Has hell frozen over?

Toronto’s CN Tower was decked out in support of the Montreal Canadiens as the team heads to the third round of the NHL playoffs.

Tonight the #CNTower will be lit red, blue, and white for the @CanadiensMTL who will go on to represent Canada’s hope for a 2021 @NHL Stanley Cup! pic.twitter.com/cEqsXqBefZ

The kind but unusual gesture on Tuesday night comes after the Habs came back to beat Toronto Maple Leafs in an improbable seven-game matchup.

The bleu, blanc, rouge then swept the Winnipeg Jets in a four-game second round series of the playoffs.

But the CN Tower’s homage to the Canadiens, which “represent Canada’s hope for a 2021 NHL Stanley Cup,” garnered some interesting reaction on social media.

Torontonians were quick to roast the decision, with one Twitter user going so far as to write the landmark is “dead” to her.

Another said “I just want to vomit.”

the cn tower is dead to me

Others thought lighting up the tower in Hogtown was just adding rubbing salt in the wound.

WHAT THE HELL IS THE CN TOWER IN TORONTO DOING LIT UP IN MONTREAL CANADIENS COLORS?! https://t.co/vpEDsr1QUX

I cannot believe the CN tower was lit up red and blue for the Montreal Canadiens. As a big Toronto Maple leafs fan, I’m just disgusted and I just wanna vomit. @TourCNTower ur based in Toronto and ur supposed to support the sports teams that are based in the city, SHAME ON U!!!

The gesture was appreciated by some in Toronto, though.

Hint: They are probably Habs fans.

To see the CN Tower light up in Habs colours. It’s a beautiful thing #GoHabsGo pic.twitter.com/dB8mbSrVDn

Montrealers, meanwhile, seemed to revel in the whole thing.

Mayor Valérie Plante also tweeted that it was “quite the honour.”

The Canadiens thanked the CN Tower for the light show.