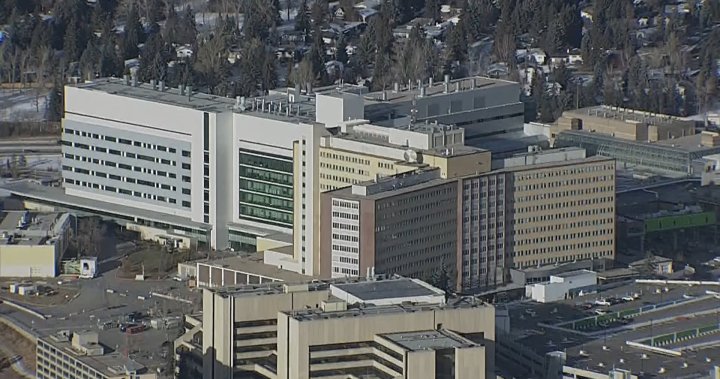 Leah Crawford was scheduled to have a hysterectomy on Sept. 15, but five days before her surgery, the Calgary woman learned it had been cancelled. Her procedure has since been re-scheduled for the end of January.

“It’s just more of having to live with the pain,” Crawford said. “Thankfully, my pain is mostly manageable but I can’t even imagine some of the other people who have been cancelled or postponed and what they’re going through.”

Read more:
Up to 70% of Edmonton zone surgeries to be postponed due to ‘COVID-19 activity’: AHS

According to Alberta Health Services, more than 15,000 patients have had their surgeries cancelled or postponed since August.

A surge of COVID-19 patients during the province’s punishing fourth wave forced AHS to redeploy resources away from operating rooms in order to expand intensive care units across the province.

With COVID-19 patient numbers declining, AHS has been able to increase surgical capacity once again but the system is not yet operating at full capacity and surgeries continue to be postponed each week.

“Last week, approximately 1,500 surgeries were postponed, which is an improvement on previous weeks during the fourth wave when we were delaying about 2,000 surgeries a week,” AHS spokesperson Kerry Williamson said in an emailed statement to Global News. “Normal surgical volume is about 5,000 surgeries a week.”

“I’m still operating only a fraction of the time I normally operate so I anticipate it will take months before we’re able to work through the backlog,” said Dr. Todd McMullen, a cancer surgeon at Edmonton’s University of Alberta Hospital.

“It’s been very difficult to find operating time to deal with these cancers that have a tendency to grow very quickly.”

Bathe treats patients with gastro-intestinal, liver and pancreatic cancer. He says his patients can often have aggressive tumours where surgery is only a viable treatment option for a short period of time. Bathe says he doesn’t yet know if the surgical delays have caused any of his patients harm.

“It’s too soon tell. l I think it will be a long time before we understand fully what the impact of this is on people’s cancer prognosis but certainly the most direct impact is the stress on the patient as they await their surgery.”

Khara Sauro is a community health researcher at the University of Calgary. She’s been studying the impact of COVID-19 related surgical delays in Alberta since the start of the first wave.

“When we interviewed patients who had had their surgeries delayed because of COVID restrictions, we found that the impact is very far reaching so it really impacts their entire life,” she said.

“We had one patient who was waiting for cardiac surgery say that he was concerned that he could have a heart attack or stroke at any period of time. It also impacts their mental health, their professional life, their family and friends, everything.”

Alberta has not been the only province to postpone surgeries during COVID-19.

Last week, Saskatchewan Health Authority CEO Scott Livingtstone said it could be 18 months before the province is able to offer orthopedic surgeries again.

Sauro says dealing with the backlog of surgical patients won’t be easy.

“I think it’s going to be tremendously hard.

2:10
‘You really feel like life is on hold’: Young Calgary boy with brain surgery postponed finally gets operation

‘You really feel like life is on hold’: Young Calgary boy with brain surgery postponed finally gets operation

“We were already working in a system that was restrained in terms of the number of surgeries and meeting targets in terms of wait times for surgeries.

“Now, add an additional 15,000 surgeries — is what we’re hearing — on top of those who haven’t even been scheduled is going to be an extra wave of non-COVID strain within our health-care system.”