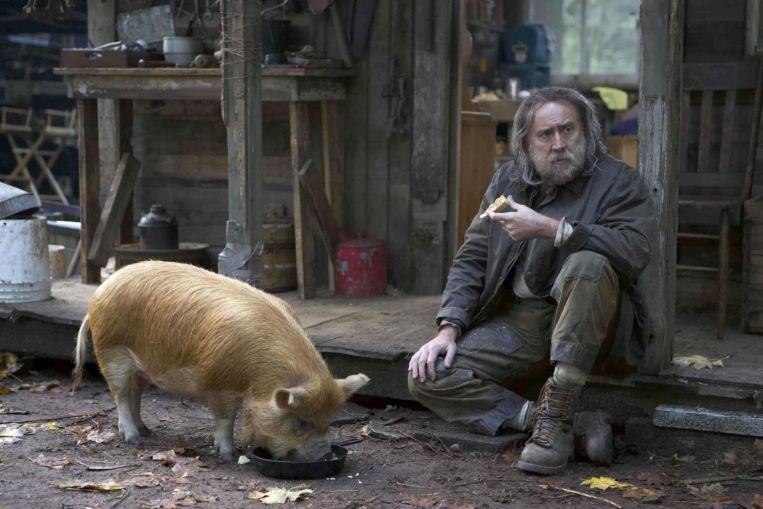 This tale of revenge over a missing porcine buddy is scary and funny in equal measure.

A hairy, near-mute Nicolas Cage is Rob, a reclusive forest-dweller eking out a living as a truffle hunter. He is aided by his talented pig. When the creature is taken in a robbery, Rob is forced to leave his shack for the bright lights of Portland, Oregon, to dive into its delightful but dangerous high-end culinary scene.

Alex Wolff is Amir, a truffle dealer who is Rob’s only friend. He is a man dragged reluctantly into Rob’s mission.

American film-maker Michael Sarnoski’s debut feature has been likened to the John Wick franchise (2014 to 2019), but the resemblance extends only to the missing animal as a plot trigger. This is by no means an action film, though there is plenty going on, most of it texture.

Rob, stoic beyond measure and wearing the open wounds from his beatings like a religious icon, opens himself up as the story progresses. Information about Amir also appears, especially about his relationship with his father Darius, played by a glowering Adam Arkin. Darius is a truffle dealer who guards his business with the scorched-earth intensity of a mob boss.

Rob’s journey moves him through the modern restaurant scene, the pretentiousness of which the mountain man takes in with a mix of disgust and pity.

This movie has plenty to say about fraught family relationships and the transformative power of a good meal, but Rob’s takedown of fine dining makes this story of a man looking for his pig stand out from the pack.

The Battle At Lake Changjin (NC16)

Now the second-highest grossing movie of all time in China, this war epic boasts three celebrated directors – Tsui Hark, Chen Kaige and Dante Lam – a run time of almost three hours as well as the most intense and bloody battle scenes one can watch that does not involve Mel Gibson.

It is not a surprise then that there are three acts to this story about a pivotal Korean War confrontation.

The first act is the prelude to the war, showing humble People’s Liberation Army commander Wu Qianli (Wu Jing) returning to his village after the Chinese Civil War with dreams of giving a plot of land to his peasant parents. His break is short-lived, as trouble brews in North Korea.

The middle portion deals with the infiltration by Chinese troops into North Korea, with the final third chapter showing the battle, known in the West as the Battle Of Chosin Reservoir.

This expressly patriotic work puts a heavy shine on Chinese military success, while either ignoring or excusing its blunders. In other words, it is no different from most Hollywood war movies celebrating American military triumphs.

Rushing troops to the front without enough food and warm clothing – the cold, reaching 40 deg C below zero, would prove to be as deadly for the Chinese side as enemy weapons – is referenced. It is not shown as an example of poor decision-making, but an act of heroic self-sacrifice.

The patriotic sloganeering will likely leave many viewers cold, but this Chinese movie here can be enjoyed as a work of bonkers battle action. It does serve as a welcome antidote to Hollywood war films that have demonised the opposing side as mindless, freedom-hating hordes.

In this sequel to the 2019 film – based on characters that originated in cartoons first published in The New Yorker magazine in the 1930s – Oscar Isaac, Charlize Theron and Chloe Grace Moretz return to voice their characters of father Gomez, mother Morticia and daughter Wednesday respectively.

Science genius Wednesday gets the family involved in a conspiracy when her school gene-splicing project draws the attention of the wrong people.