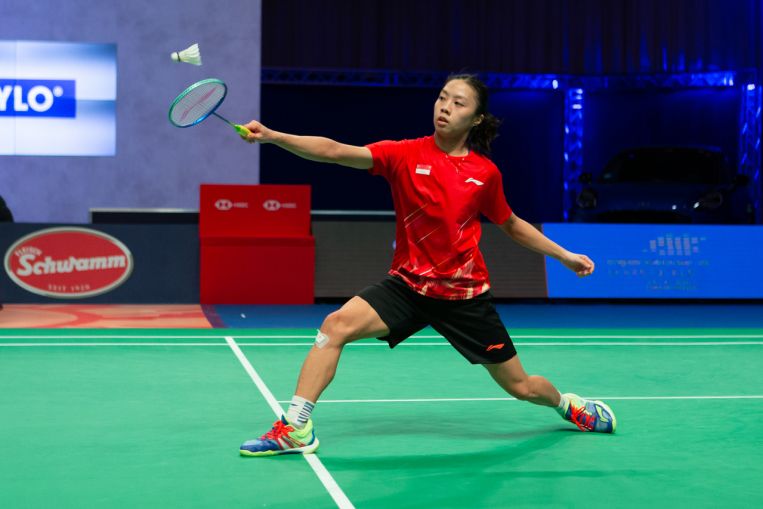 SINGAPORE – National shuttler Yeo Jia Min missed out on the biggest title of her career after losing to Thailand’s world No. 14 Busanan Ongbamrungphan 21-10, 21-14 in the final of the Hylo Open in Germany on Sunday (Nov 7).

The 25-year-old Thai was the quicker and sharper player on the day as she read and countered Yeo’s game well, taking just 35 minutes to win her first championship at the Badminton World Federation World Tour Super 500 level. It is the fourth tier on the sport’s professional circuit.

In the men’s singles final, compatriot and world No. 39 Loh Kean Yew will square off against Malaysia’s world No. 8 Lee Zii Jia later in the day at the Saarlandhalle in Saarbrucken, Germany.

The 24-year-old had upset Taiwanese world No. 4 Chou Tien-chen, France’s world No. 35 Toma Junior Popov, Denmark’s world No. 13 Rasmus Gemke and India’s 21st-ranked Lakshya Sen at the US$320,000 event this past week.

Singapore Badminton Association technical director Martin Andrew is pleased with the duo’s development and progress as they complete a month of competition in Europe and return to Asia for the Nov 16-21 Indonesia Masters and Nov 23-28 Indonesia Open.

On top of being pleased with their fighting spirit and game management, he said: “Jia Min has started to adopt a more aggressive style, following up strong attacks with additional power shots and linking more pace together, while bringing in softer controlled play.

“She has performed well and started to be able to turn matches around in her favour. We will work on some areas but she is progressing well and can challenge the top women’s players.

“Kean Yew has also started to show the level he is capable of. His attacking style of play is linking well with his agility. When he is able to play freely, coupled with strong tactics, he is able to attack and use his speed and defensive abilities well.

“This is probably where he has improved the most – the quality of his defence followed up by good offensive play. Kean Yew also has areas to develop like getting confident enough to maintain this style of play and delivering consistently.”