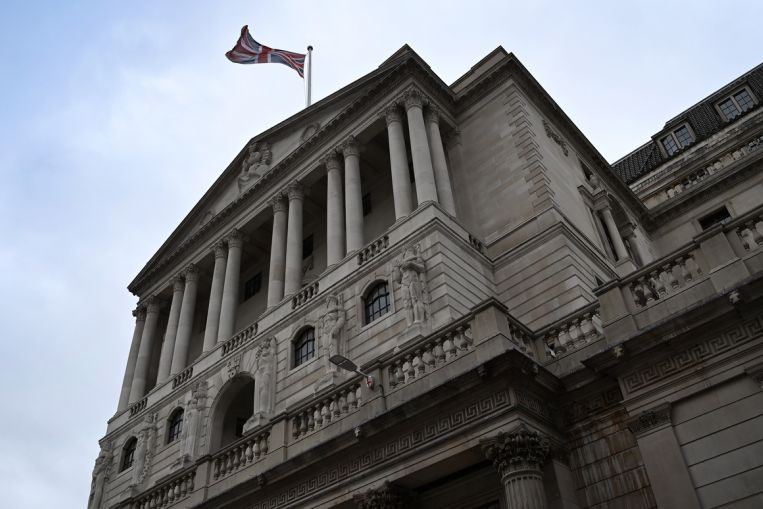 LONDON (BLOOMBERG) – The Bank of England defied market expectations by keeping interest rates on hold, a decision that threatens to undermine its credibility with investors who believed a hike was a done deal.

Policy makers led by Governor Andrew Bailey voted 7-2 to keep the benchmark rate at 0.1 per cent, prioritising immediate concerns about slowing growth more than a price spike that will lift inflation to 5 per cent next year.

Officials also pushed back against market pricing for a series of hikes to 1 per cent next year, noting that such aggressive action would leave price growth below its 2 per cent goal at the end of their forecast period. Mr Bailey made an explicit reference to such bets at a press conference after the decision: “I would caution against views on the scale of an increase that would be likely to push inflation below target in the future,” he said. The pound weakened after the decision, trading 1 per cent lower at US$1.3544 as of 1:25 pm in London. Government bonds surged, while money markets slashed rate hike bets.

The central bank said recent economic data reinforce the view that borrowing costs will have to rise in the “coming months” to keep inflation on target. But it also noted that major uncertainties remain about the jobs market after the end of the government’s furlough program for those out of work during the pandemic.

The decision raises questions about the bank’s communications, and especially Mr Bailey, who delivered a series of warnings about inflation and allowed speculation for an immediate move in rates to build in the past few weeks, only to vote against a hike.

The surprise announcement on Thursday invoked comparisons with Mr Bailey’s predecessor Mark Carney, who was branded the “unreliable boyfriend” by U.K. lawmakers. Mr Bailey disagreed with that assessment, saying he never made a pledge to act at any particular meeting. He also said the latest decision was a “close call.”

The Monetary Policy Committee also voted 6-3 to maintain its bond buying target. It updated forecasts for the economy, and now sees inflation peaking at 5 per cent in April 2022, which would be the highest since 2011. Most officials judged that to be temporary, and the BOE emphasized that there’s was little monetary policy could do to prevent the spike.

Officials indicated increasing concerns about the outlook for growth, noting signs that consumption is weakening because of supply-side bottlenecks and a surge in the cost of oil, natural gas and electricity.

The committee noted that those issues were holding back the economy, which will linger below its pre-coronavirus level until the first three months of next year, a quarter later than previously expected. The forecast for 2022 growth was cut to 5 per cent from 6 per cent. That cut came despite a small fiscal boost after Chancellor of the Exchequer Rishi Sunak lifted spending in his annual budget last week.

Just two officials, Mr Dave Ramsden and Mr Michael Saunders, voted for an immediate move, saying that inflation is likely to remain above target for the next few years unless rates rise.

Those two, along with Ms Catherine Mann, also voted to reduce the BOE’s target for government bond purchases by 20 billion pounds to 855 billion pounds. Those purchases are due to finish by the end of the year.

The majority saw merit in waiting, saying there was a cost to acting immediately. The current stance of monetary policy allows more space to tighten than loosen, they said.

Expectations about the decision for this meeting shifted rapidly in the past few weeks. after comments from Bailey highlighting the hawkish case. That left traders before the meeting pricing in a boost in the benchmark rate to 1.25 per cent by the end of next year. That suggested a rate rise once a quarter, which, coupled with the impact on the BOE’s bond holdings, would imply the fastest tightening cycle in at least two decades.

The BOE’s forecasts are conditioned on an older market curve showing rates hitting 1 per cent by the end of 2022. That showed inflation dropping below target by the end of the forecast period, a sign that officials think that forward curve for rates in financial markets is too aggressive.

Policy makers also cautioned that if energy prices move in line with a downward sloping futures curve, inflation may drop even further below target.

Even without a hike on Thursday, the prospect of a move in coming months leaves the BOE far further down the road to tightening than its major peers.

Earlier, European Central Bank president Christine Lagarde had indicated she thought the conditions for a rate hike by her institution are unlikely to be met in 2022.