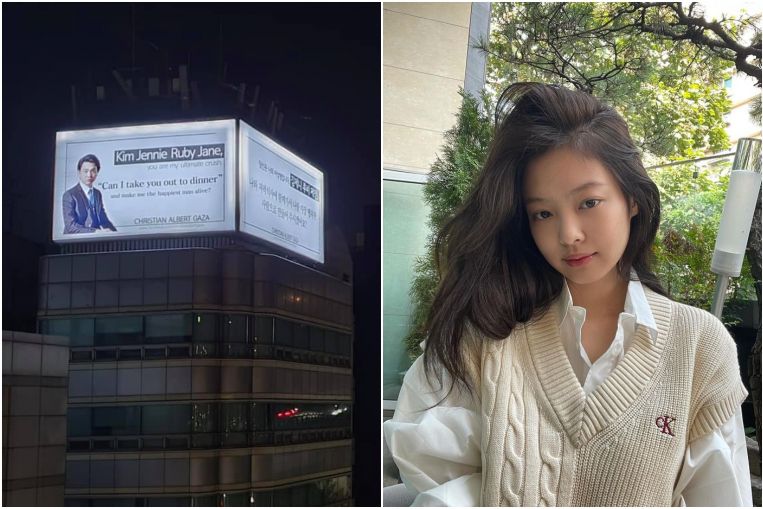 SEOUL – Controversial Filipino social media personality Christian Albert Gaza has raised the ire of Blackpink fans after he bought a billboard to ask the K-pop girl group’s Jennie out for dinner.

The two billboards with his photo are in Seoul, a few kilometres away from the office of Blackpink’s management agency, YG Entertainment, and reportedly cost 1.5 million Philippine pesos (S$40,000), according to Gaza, who was convicted of an investment scam in 2018.

Also known as Xian Gaza, the 28-year-old wrote on the billboards in English and Korea: “Kim Jennie Ruby Jane, you are my ultimate crush. Can I take you out to dinner and make me the happiest man alive?”

In a Facebook post on Sunday (Oct 31), he said that he did not know how else to contact Jennie, 25. The self-proclaimed self-made millionaire added that he refused to put the logos of his businesses on the billboards to express his sincerity and claimed he could easily make 1.5 million Philippine pesos in 10 days.

This was not the first time he had pulled such a stunt.

In 2017, he had invited Filipino actress Erich Gonzales for a coffee date using a billboard in Manila. He wrote: “I can’t even espresso how much I like you a latte. Will you drink coffee with me?”, but she turned him down.

Last year, for Valentine’s Day, he set his sights on another Filipino actress, Nadine Lustre, and dedicated a Facebook post to her with a picture of a red Ford Mustang surrounded by flowers.

Blackpink fans, known as Blinks, have called on YG Entertainment to protect Jennie, as they unearthed a lengthy list of his alleged shady business dealings.

In June, the Securities and Exchange Commission in the Philippines released an advisory against digital currency Xian Coin, operated by Gaza, and warned of it as a possible Ponzi scheme.

According to an article on Filipino website BusinessWorld in June, the commission also pointed out Gaza’s “unsavoury reputation” to warn the public.

Even before placing the latest billboard ads, he had been posting a series of photos, poorly edited to show him with the K-pop idol in various settings, such as having a meal together and posing cheek to cheek.