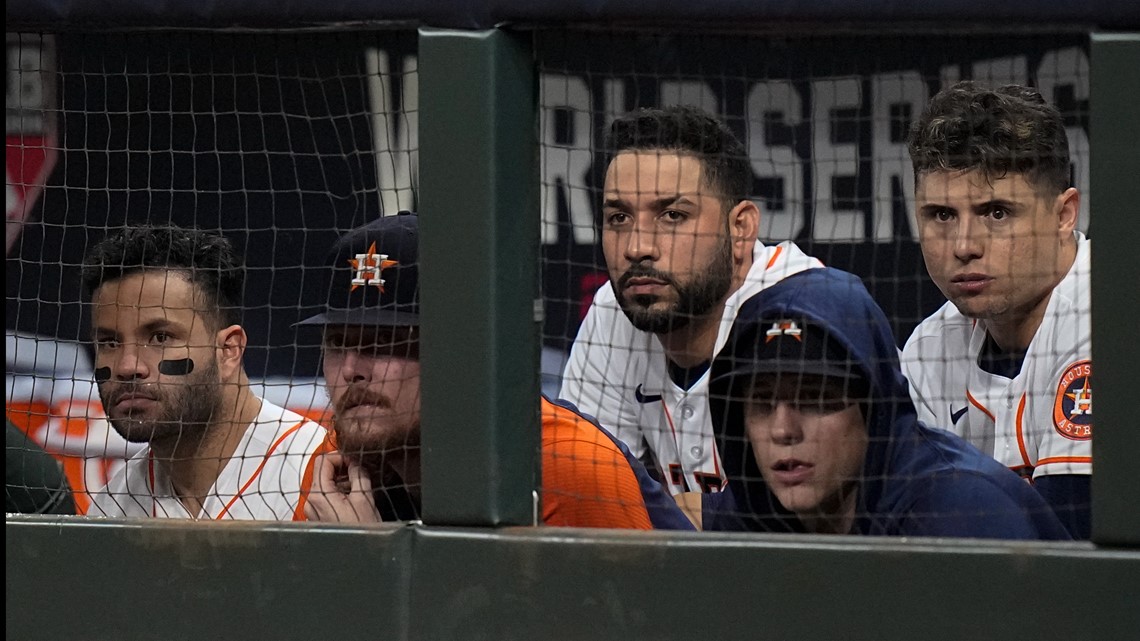 The Astros couldn’t get anything going on a night the Braves connected on a trio of longballs. Atlanta won the Series 4-2.

Jorge Soler hit his third home run of the Series, a go-ahead three-run drive in the third off Luis Garcia, and Freddie Freeman and Dansby Swanson also connected for longballs.

Steadied by 66-year-old manager Brian Snitker, an organization man for four decades, the underdog Braves won the franchise’s fourth title, about 9 1/2 months after Hall of Fame slugger Hank Aaron died on Jan. 22 at 86.

Atlanta’s 7-0 win over Houston in Game 6 to win the World Series could mark the end of an era for the Astros.

After losing Gerrit Cole and George Springer in free agency the last two years, Houston now faces the distinct possibility that Carlos Correa will soon be gone, too. The star shortstop, who has been with the franchise since he was selected with the first overall draft pick in 2012, is a free agent and there’s concern the Astros won’t be able to keep him.

#KHOU11 #Astros @TeamCJCorrea talks about facing an off-season of doubt. Not knowing where he’ll play next season as he enters the off-season pic.twitter.com/AsXcX4M7LU

Nineteen years after falling one win short with San Francisco, Dusty Baker’s quest for his first World Series title as manager ended two victories shy with his Houston Astros falling 7-0 to complete a six-game loss to the Atlanta Braves, the team that launched his career back in that Summer of Love.

Now 72 and at end of his 24th season as a big league skipper following 19 as an outfielder and four as a coach, he spent much of this one trudging back and forth from the dugout to the pitcher’s mound, shoulders slightly hunched.

#KHOU1 Here’s how Dusty responded to the question if he wants to be back in 2022. He says “Yes!”Heres more: pic.twitter.com/eCpfo231KW

After the Astros were eliminated Tuesday night, pitching coach Brett Strom announce he’s not returning to the team next season. KHOU 11 sports reporter Daniel Gotera tweeted that Strom had a conversation with Astros General Manager James Click a month ago and came to the decision.

Brent Strom says it’s an emotional time for him stepping away: “I’ve been doing this my whole life”

Brent Strom on his decision to step away from the Astros as lead pitching coach. pic.twitter.com/hQrhv55WLJ

Freddie Freeman homered to add another run for the Braves in the seventh inning.

Freddie Freeman doubled home Jorge Soler in the top of the fifth to add another run to the Braves’ ledger.

Dansby Swanson hit a two-run homer in the top of the fifth inning to give the Braves a 5-0 lead.

Jorge Soler hit a three-run homer to left to give the Braves a 3-0 lead in the top of the third inning.

The Astros got their first two runners on in the bottom of the first inning but Fried worked out of the jam to keep the game scoreless.

Garcia worked a clean first inning, sitting the Braves down in order. He got some help from Kyle Tucker with this diving catch on Eddie Rosario.

Mattress Mack accompanied Houston’s “Rally Nuns” for the first pitch while Travis Scott made the “Play Ball” call before the game.

Fans geared up for Game 6

Fans showed up early and showed their spirit on signs and their clothes.

Here’s what it looked like at the Juice Box hours before the first pitch.

Gates at Minute Maid Park are about to open at 4 pm. At 3:58 pm… the #WorldSeries sign game is already strong! #khou11 SHE FLEW IN FROM MAUI!!!!! pic.twitter.com/7IyZpmeqCZ

Rally nuns are back!

Hey, Astros fans! We have some great news that’ll help you breathe just a little easier as we head to Game 6 of the World Series.

A nun from the Dominican Sisters of Mary Immaculate Province will be throwing out the first pitch at 7:09 p.m.

If you can’t get enough of the “Rally Nuns,” you can head over to the Gallery Furniture on the North Freeway for “Rally Nuns” t-shirts.

World Series tickets are available, but it’ll cost you

As of Tuesday morning, KHOU 11’s Michelle Choi said there were roughly 4,000 tickets left. For standing-room-only tickets, there were some that were about $400 apiece.  And if you want better seats?  We’re looking at $1,200 or more.

Fans can get ready to cheer on the Astros before the games at Astros Street Fest. Street Fest starts three hours before game time and fans will need a ticket to take part. Fans can enjoy live music, food trucks, inflatable games and more. You can learn more at Astros.com/StreetFest.

Getting to Minute Maid Park

There are plenty of surface lots and parking garages in the area. You can find the best one by downloading the Park Whiz mobile app. It will show you how much each lot costs, and it also lets you book a space in advance. Another app that does the same thing is called Park Houston.

You can also take the train to the game! METRO rail purple line riders should exit at the Convention District station, then walk two blocks north to the ballpark. Keep in mind though, the trains share lanes with street traffic, so getting home could take longer.

If you prefer to leave the driving to someone else, Minute Maid has a rideshare pickup and drop-off zone located just outside the center field gate on Crawford Street between Preston Street and Congress Avenue.