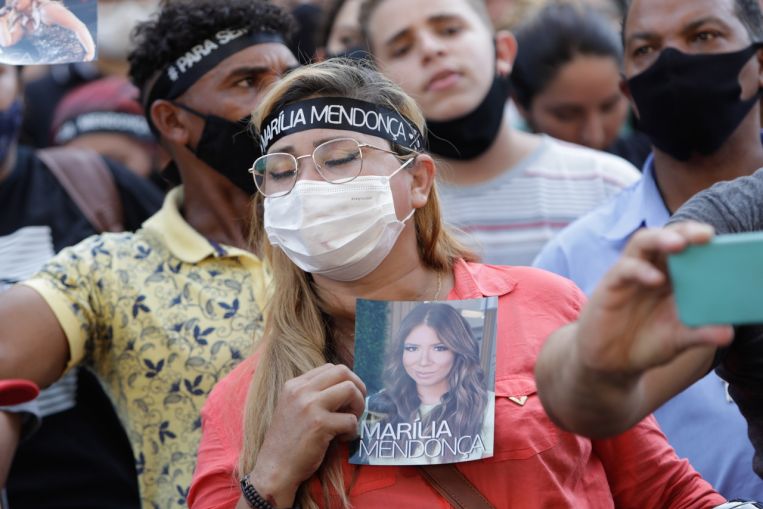 GOIANIA, BRAZIL (AFP) – Thousands of people flooded the hometown of late Brazilian country music star Marilia Mendonca on Saturday (Nov 6), paying an emotional tribute to the beloved songstress of sorrow and strong women after she was killed in a plane crash at age 26.

Mendonca, a Latin Grammy-winning superstar of Brazilian “sertanejo” music, died with four other people on Friday when a small plane carrying her to a concert crashed in the southeastern state of Minas Gerais.

Her body was flown on Saturday to the central city of Goiania, her home, where huge crowds of distraught fans lined up to file past her white-lined casket before she was laid to rest.

Known for her soaring voice and heartrending songs, Mendonca managed to break into a country music scene long dominated by men and machismo. She was a leading figure in a burgeoning sub-genre known as “feminejo”, or sertanejo music by women.

But her massive fan base included men and women alike. Many mourners outside the stadium where the wake was held could barely find words to describe their feelings.

“It’s an emotion so strong we don’t even know how to express it. It’s an immense pain, for all Brazilians,” 22-year-old Matheus Alves told AFP.

“It was a tremendous loss. It’s such a blow I don’t even have the words to explain it,” said 16-year-old student Gustavo Lacerda, before breaking into one of Mendonca’s songs, Eu Sei De Cor (I Know It By Heart).

Fans started lining up at dawn outside the 15,000-capacity arena, where large floral arrangements arrived in a steady stream.

The star and an uncle who worked with her – also killed in the crash – were later buried in a small private ceremony at a local cemetery, after a funeral cortege through the city.

Mendonca’s producer and the plane’s two pilots were also killed in the crash, which left their twin-engine Beechcraft King Air C90A shattered against the rocks near a picturesque waterfall outside the city of Caratinga, where the artist had been scheduled to perform.

Authorities said the plane hit an electrical tower just kilometres from the Caratinga airport, but it was unclear whether that caused the accident or if the aircraft was already on its way down.

Air force officials were at the scene on Saturday investigating.

Nicknamed the “Queen of Suffering”, Mendonca was known for ballads of heartbreak and spurned lovers, but also for singing of women’s empowerment and the need to “overcome” – the title of one of her most famous songs.

She had 22 million subscribers on YouTube, 39 million followers on Instagram and more than eight million monthly listeners on Spotify.

Her death drew heartfelt tributes from figures ranging from Brazilian music legend Caetano Veloso to football superstar Neymar – who dedicated a goal to her on Saturday – to President Jair Bolsonaro.

“She was one of the greatest artists of her generation,” Mr Bolsonaro wrote on Twitter, saying the country was “in shock”.

Mendonca, however, was no fan of the far-right president, who has often been accused of sexist remarks and anti-women policies.

In the run-up to the 2018 election that brought the former army captain to power, Mendonca was among the prominent Brazilian women to join an anti-Bolsonaro movement called #EleNao – “Not him”.

“Women, I want you to think long and hard about whether you want this big step backwards in your lives,” she said at the time.

The wake for Mendonca and her uncle was carried live on national television, and drew wall-to-wall coverage in Brazilian media.

Mendonca’s mother arrived supported by two ushers, but was overcome with emotion and left.

The huge crowds of fans filed past the two caskets in a steady stream, some shouting Mendonca’s name, others singing her songs as ushers in black suits gently prompted them to keep the line moving.

“We came to say goodbye to our great Marilia Mendonca and thank her for spending these years of her life singing for us and making our hearts soar,” student Davi Dyeimes Linares, who travelled 130km to be the first in line, told news site G1.