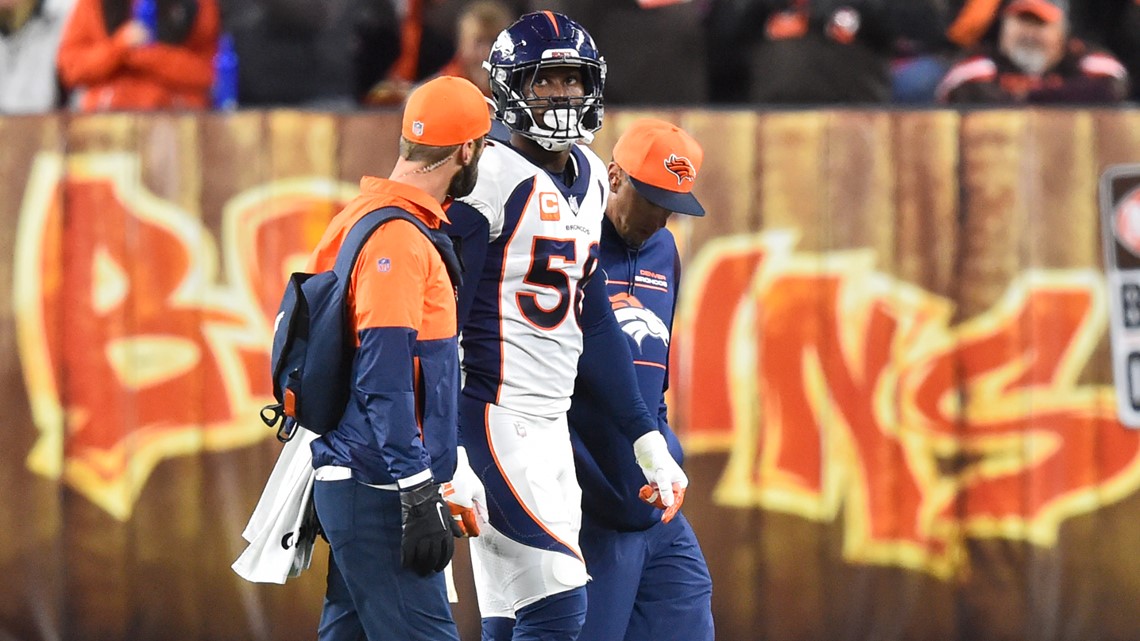 If the Broncos lose without him, has Von already played his last game for Denver? Rookie Baron Browning is expected to play inside linebacker.

DENVER — Von Miller will not be active today for the game against Washington. The Broncos’ star pass rusher has been out all week with a sprained ankle, an injury suffered late in the first half of Denver’s previous game last Thursday at Cleveland.

Miller had 4 sacks through the Broncos’ first three games this season, all wins. He had a half-sack in game 4 against Baltimore’s Lamar Jackson but has been sackless since then.

The Broncos bring a four-game losing streak into their game against 2-5 Washington.

Miller said after suffering the injury that he thought he would be able to play against Washington today. But the ankle didn’t come around as hoped.

With the trade deadline at 2:00 p.m. Tuesday, a Broncos loss to Washington today could put Miller on the market. It’s unclear how much his ankle injury would affect his possible trade status.

A third-round draft pick out of mighty Ohio State, Brandon Browning as a Broncos inside linebacker has spent far more time in the trainer’s room than he has on the field.

A knee injury on the second day of rookie minicamp in May sidelined through the offseason and all but the final week of training camp. Then came muscle spasms in his back. Then a concussion.

But after Broncos inside linebackers got stampeded last week by a third-string Cleveland Browns’ running back, and with newly acquired veteran Kenny Young still trying to pick up his new playbook, Browning is being counted on to play significant snaps Sunday against the Washington Football Team.

“He’ll have to play a big role in there, I think,’’ head coach Vic Fangio said earlier this week.

Is Browning ready? Or ready or not?

“We’ll see,’’ Fangio said. “You guys know his story. He’s missed a lot of time through various injuries. It’s time for him to step up.”

Peyton Manning was a record-setting great quarterback for three years, and a Super Bowl champ in his fourth year, enough to become the 35th Bronco member to have his portrait sculpted on a pillar at the team’s Ring of Fame Plaza. The unveiling of Peyton’s Pillar will be conducted during the Broncos-Washington pregame ceremony Sunday.

“I think this Ring of Fame is especially unique because it’s for the fans all the time,’’ said Ring of Fame sculptor Brian Hanlon. “You don’t have to be in the stadium to learn about the team. And an educated fan is a better fan.”

Hanlon is especially gratified that he sculpted the pillars and statues of Pat Bowlen and the Barrell Man with Core-Ten steel that was brought over from the old Mile High Stadium.

He says the pillar of former Orange Crush coach Red Miller is his favorite, but Manning’s is up there, if because it’s his most recent work.

“Looking at photos that show his brilliance as a player and dignity, too,’’ Hanlon said. “And sometimes that’s a hard balance to find with just a portrait on a pillar.’’

RELATED: Broncos rookie running back Javonte Williams as perceptive as he is strong

RELATED: Washington game could determine whether Broncos are buyers or sellers in trade market