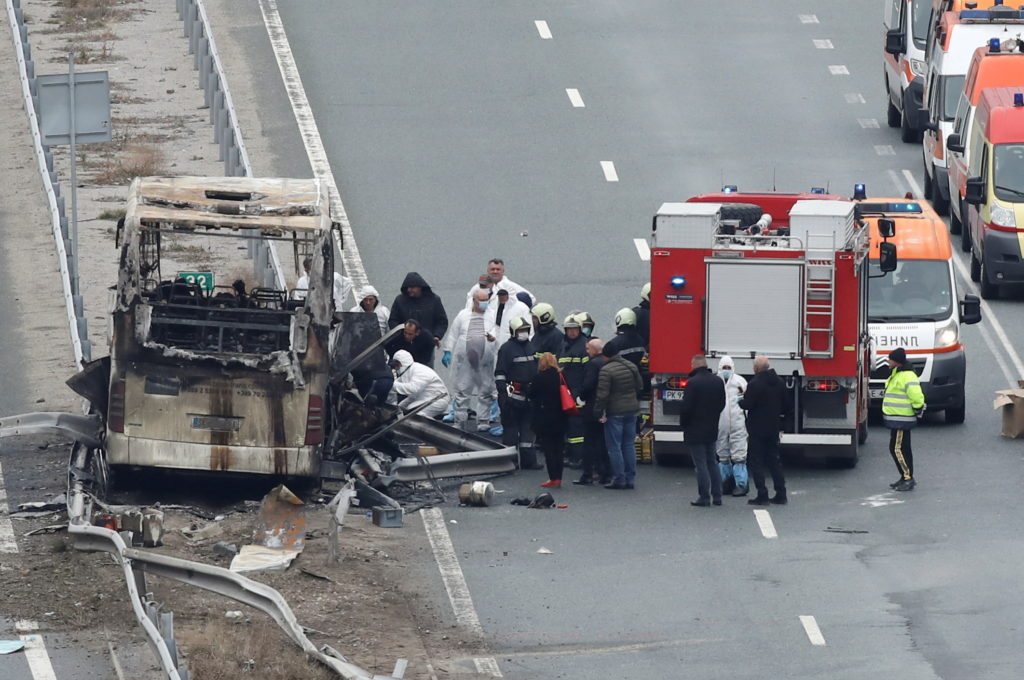 The bus apparently ripped through a guardrail on a highway, though authorities have said the cause is still under investigation. Photos taken shortly after the crash showed the vehicle engulfed in flames as plumes of thick, black smoke rose. Daylight revealed a burned-out shell with all of its windows blown out, sitting in the median. A portion of the guardrail was peeled away and lying in the road.

Seven people were taken to hospitals for treatment after the crash, which happened as a group of buses was returning from a trip to Turkey.

Bulgarian Interior Minister Boyko Rashkov told reporters at the crash site that he had “never in my life seen something more horrifying.”

“The picture is horrifying, the people who were on the bus are turned to charcoal,” Rashkov said. “It is impossible to say how many they were. There were four buses that traveled together, and it is possible that passengers changed buses during the stops.”

Twelve children were confirmed among the dead, according to North Macedonia’s chief prosecutor, Ljubomir Joveski, who also visited the scene of the accident.

The country’s prime minister, Zoran Zaev, traveled to Bulgaria as well, visiting survivors in the hospital. He told Bulgarian television channel bTV that one said he was awoken by an explosion.

His government observed a minute of silence Tuesday and declared three days of national mourning in the country of about 2 million people. Flags will be lowered to half-staff, and all public events will be canceled, authorities said.

Media in the country reported that police were outside the offices in the capital, Skopje, of a travel company that is believed to have organized the trip.

Borislav Sarafov, chief of Bulgaria’s national investigation service, told reporters near the crash site that victims and eyewitnesses are being questioned.

In 2019, Bulgaria had the second-highest road fatality rate in the 27-nation European Union, with 89 people killed per million, according to European Commission data.

“Let’s hope we learn lessons from this tragic incident and we can prevent such incidents in the future,” said Bulgarian Caretaker Prime Minister Stefan Yanev, who also visited the crash site.

Albanian Foreign Minister Olta Xhacka wrote online that almost all of those who died were ethnic Albanians — but it was not clear if they were also residents or citizens of North Macedonia, which is home to a significant number of ethnic Albanians.

European Commission President Ursula von der Leyen expressed her condolences to the families and friends of those who died and said that “in these terrible times, Europe stands in solidarity with you.”
___