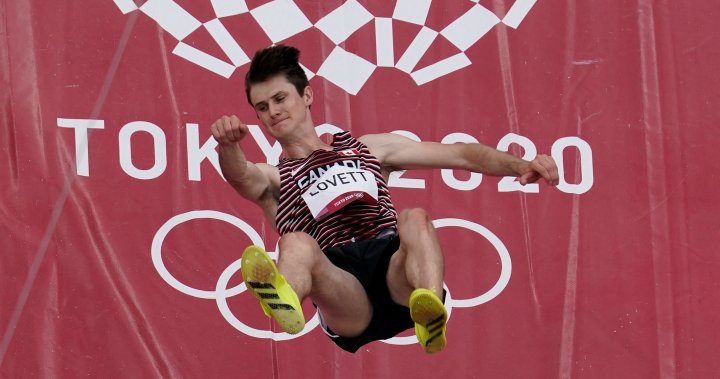 Canadian athletes will be busy competing in several events at the Tokyo Olympics Sunday, including chances for more swimming medals and a shot at the gold in men’s high jump and women’s springboard diving.

For Canadian fans, events will begin Saturday evening and continue overnight into Sunday.

Here’s when you can see Canada compete in several sports (all times Eastern). Events with multiple showings for Canada are marked with starting times. Medal events are marked in bold.

Read more:
Olympics medal count: Here’s who won the most medals during the Tokyo Games

Mackenzie Hughes and Corey Conners are both tied for 17th place heading into the fourth and final round of men’s play at 6:30 p.m. ET Saturday, which will decide the medal winners.

Canada plays its final game of the men’s preliminary rounds against Poland at 8 p.m. ET Saturday.

The men are entering the game with a 2-2 record, having lost its first two matches against Italy and Japan before bouncing back to defeat Iran and Venezuela this week.

Heather Bansley and Brandie Wilkerson head into the women’s round of 16, taking on the undefeated United States at 8 p.m. ET Saturday.

The men’s foil team takes on Germany in the table of 16 starting at 8 p.m. ET Saturday.

In the women’s 3,000-metre steeplechase qualifier, Genevieve Lalonde will compete in the first heat at 8:40 p.m. ET, followed by Regan Yee in the second heat at 8:55 p.m. ET and Alycia Butterworth in the third heat at 9:10 p.m. ET.

At 8:50 p.m. ET, Christabel Nettey will aim to make it through the women’s long jump qualification.

Django Lovett will seek a medal in the men’s high jump final at 6:10 a.m. ET Sunday, after tying for first place in the qualifier.

Then at 7:35 a.m. ET, Marco Arop will continue the journey toward his own medal in the men’s 800-metre semifinal.

Team Canada will look to improve on its 1-1 record in the women’s basketball preliminary rounds when it faces Spain at 9 p.m. ET Saturday.

Elizabeth Erica Wiebe will take on Estonia’s Epp Maee in the first round of the women’s freestyle 76-kilogram weight class, which begins at 10 p.m. ET.

Wiebe and Maee will be the sixth pair to compete in their arena.

The men’s and women’s teams will both race for gold in the 100-metre medley relay finals.

The men’s team of Markus Thormeyer, Joshua Liendo Edwards, Gabe Mastromatteo and Yuri Kisil will then swim at 10:36 p.m. ET.

The team of Jacob Saunders and Oliver Bone will set sail in their next two races of the men’s two-person 470 dinghy event starting at 11:15 p.m. ET Saturday.

Then at 2:05 a.m. ET Sunday, Tom Ramshaw will run the first of his final two races in the men’s one-person heavyweight finn dinghy event.

Kristel Ngarlem will compete in the non-medal final of the women’s 76-kilogram weight class competition starting at 12:50 a.m. ET Sunday.

Jennifer Abel will look to improve on her fourth-place finish at the 2016 Games in Rio when she competes in the women’s three-metre springboard final at 2 a.m. ET Sunday.

Canada seeks its second win of the women’s preliminary round against the Netherlands at 2:30 a.m. ET Sunday.

The team is carrying a 1-2 record after losses against Australia and Spain last weekend, bouncing back against South Africa on Wednesday.

Shallon Olsen will represent Canada in the women’s vault final at 4:52 a.m. ET Sunday, with Elsabeth Black standing by as a reserve.