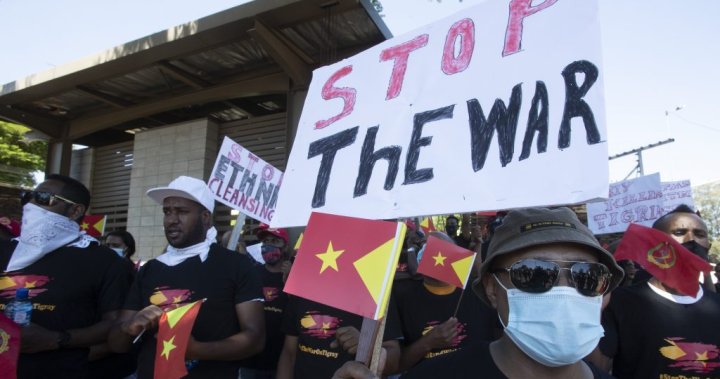 Worsening security in Ethiopia has prompted Canada to withdraw family members of diplomats and non-essential staff from the country.

Global Affairs Canada issued a statement Sunday saying the situation is rapidly deteriorating amid hostilities in the country’s northern region, and the safety of Canadians is the department’s highest priority.

The department is urging people to consider leaving the country if they can do so safely.

It also encourages all Canadians in Ethiopia to check Global Affairs’ travel advice and advisories often and to register with the department.

The United Nations says that after heavy fighting erupted a year ago between government troops and those loyal to the Tigray People’s Liberation Front (TPLF), some 5.2 million people remain in need of assistance across the Ethiopian regions of Tigray, Amhara and Afar.

Amid allegations of widespread human rights abuses on all sides, thousands are feared killed and more than two million have been forced to flee their homes, the UN says.

“Canada stands with all the people of Ethiopia. Documented violations and abuses of human rights and violations of international humanitarian law are deeply concerning,” Global Affairs Canada said.

“Canada calls for an immediate cessation of hostilities and an end to indiscriminate attacks on civilians and humanitarian personnel in northern Ethiopia. Humanitarian access must be guaranteed.”

I spoke with Ambassador @stejobin on the deteriorating and deeply concerning situation in #Ethiopia, and on the steps being taken to protect our staff and their families: https://t.co/UHsISOmGIB

In a tweet Sunday, Foreign Affairs Minister Melanie Joly said she spoke with Ambassador Stephane Jobin about the developments.

“Our hearts go out to all Canadians who are concerned about their loved ones in Ethiopia.”