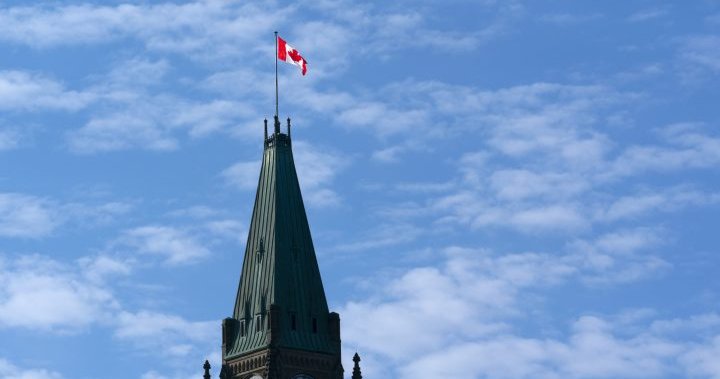 Flags on federal buildings are flying at full-mast for the first time since the end of May.

The flags were hoisted at sunset Sunday so they could be lowered again at sunrise on Monday for Indigenous Veterans Day.

The federal government announced Friday its decision to raise the flags after talks with Indigenous groups.

They were lowered in May in honour of Indigenous children who suffered and died at residential schools.

The flags will be hoisted again at sunset on Monday so they can be lowered on Remembrance Day to honour Canada’s veterans and war dead.

0:42
Agreement with Indigenous communities on lowering flags to come ahead of Remembrance Day: Trudeau

Agreement with Indigenous communities on lowering flags to come ahead of Remembrance Day: Trudeau

After Remembrance Day, the flags will fly at full-mast once again, but will be lowered for National Truth and Reconciliation Day every Sept. 30.

The flags were lowered to half-mast on May 30 after the finding of what are believed to be hundreds of unmarked graves at a former residential school site in Kamloops, B.C.

Weeks later, the Cowessess First Nation located more than 700 unmarked graves on the grounds of a former residential school in Saskatchewan.