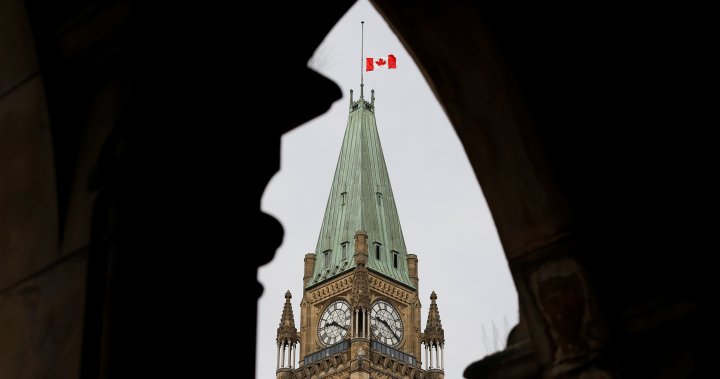 The Canadian flag will return to full mast after Remembrance Day on Nov. 11, marking the end of the longest period in Canadian history that the flag has been at half-mast.

The flag will be raised at the Peace Tower in Ottawa and on all Government of Canada buildings and establishments across the country at sunset on Nov. 7, and then lowered again at sunrise on Nov. 8 to mark Indigenous Veterans Day, according to government ministers.

From there, it will return to full-mast.

“Moving forward, the National Flag of Canada will be half-masted to mark the National Day for Truth and Reconciliation every September 30,” Minister of Crown–Indigenous Relations Canada Marc Miller and Minister of Canadian Heritage Pablo Rodriguez said in a statement.

READ MORE: Remembrance Day 2021: What will it take to raise the flag?

The Canadian flag has been half-mast since May 30 to honour the discovery of unmarked graves of Indigenous children at a former Kamloops residential school and has remained as other gravesites have since been discovered at residential school sites across the country.

The news comes after the Assembly of First Nations requested on Friday that the government attach to all federal buildings, as well as the Peace Tower, the orange flag that reads “Every Child Matters” and has been used to commemorate Indigenous children lost at residential schools.

0:42
Agreement with Indigenous communities on lowering flags to come ahead of Remembrance Day: Trudeau

Agreement with Indigenous communities on lowering flags to come ahead of Remembrance Day: Trudeau

The government did not address the request in its statement but Global News has reached out for comment and has not received a response yet.

“Raising the flag at this time will allow us to honour and remember important moments in Canada’s history,” the ministers said in their statement.

“Many discussions were held between Indigenous partners and the Government of Canada to seek guidance on how best to honour the victims of residential schools and ensure they are never forgotten in the future.”

Conservative Leader Erin O’Toole said in response to the announcement that “symbolic acts are not a substitute for concrete action on reconciliation.”

“As the flag is raised, I call on all Canadians to rededicate ourselves to our collective effort towards reconciliation and remembrance,” he said in a statement.

The discovery of the unmarked burial sites has resulted in a national reckoning over the horrors of the residential school system and the Canadian government’s treatment of Indigenous people.

And while the work towards reconciliation is far from over, there have been growing questions about when to raise the flags, when they should be lowered once more, and how best to mark the loss of Indigenous children forced to attend the schools in a longer-term, ongoing way.