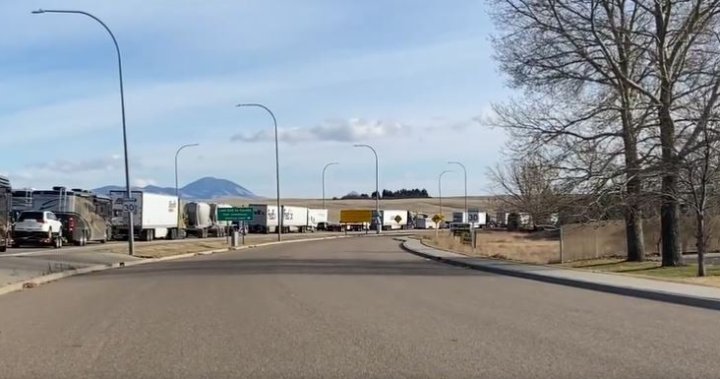 Canadian snowbirds chomping at the bit to escape the colder weather for sunnier locales had to wait a little bit longer on Monday, as travelers were met with the longest lineups the border village of Coutts has ever seen.

In an area of Alberta known for its prairie views, vehicles dominated the scenery Monday.

A little hard to see just how long of a line this is. Have been trying to get into Coutts for the last 40 minutes. Line up stretches at least 4 kilometres out of the village. pic.twitter.com/5SnshR9oFK

“We thought it would be a little less than this but… they’re backed up there forever,” said Gerard Reinbold, who was on his way to Phoenix.

“It’s been really slow-going, but I guess we can’t help that.”

By noon, some on their way south were waiting upwards of three hours, on the first day the United States’ land borders have been open since they closed on March 21, 2020.

Gordon Bennett came from Revelstoke, B.C. to Calgary, before driving to the border from there.

“My wife was surprised, (but) I wasn’t. I was kind of thinking three and half hours, probably,” Bennett said while in line.

“We’re good with it,” said fellow traveler Ambrose Reschny. “We know where the sunny south is and we’re heading that way.”

Land travelers must be prepared to show proof of full vaccination against COVID-19 to enter the U.S. and a negative molecular test when returning to Canada.

Read more:
U.S. border is reopening to Canada. What you need to know before you travel

Brian Schott with Explore Whitefish says they’re coming off their busiest summer and fall season on record due to a boost in domestic tourism, but are excited to have Canadians back in Montana after 20 months of restrictions.

“Canadian visitors have always been a way of life for Whitefish,” Schott said. “We love to welcome them and we’re really happy about having them back.”

But not everyone enjoyed the sight of vehicles streaming towards the border.

Those living in the village of Coutts say they’ve been negatively impacted by the sudden influx of travelers.

“It was a little shocking,” resident Nadine Clark said. “We don’t usually see that many snowbirds or travelers around here, maybe once or twice a season and that’s about it.”

“Nothing like this. We’ve never had a lineup back to the tracks.”

Update: managed to get into town a couple hours ago through a dirt road detour. Spoke with a handful of ppl in their vehicles who said they’d been waiting 3 hours by the time they reached Duty Free. Many are heading to Arizona. pic.twitter.com/WQu7mkc58Z

Clark has a view of the border crossing from her home, providing her with a front-row seat of her usually quiet village, now trapped in a surge of bumper-to-bumper traffic.

“I had to go up to the hospital this morning for a baby check-up, but we had to miss that and reschedule because I couldn’t get out of town.”

According to Willett, there has been one minor fender bender.

Clark is planning to visit family in the U.S. herself and understands the excitement, but is waiting out the rush, and suggests others do the same.

“For anybody that’s just trying to go down leisurely for a couple of days, I recommend them not to.”

“Not until the New Year or at least closer to Christmas… because it’s going to be crazy like this.”

“We expect to have a very, very strong winter season here in Whitefish,” Schott said. “(We) encourage people to come before the busier times of the holidays.”

Mid-afternoon saw traffic slow significantly, down from a peak lineup that Willett figures reached six-kilometres long, but he figures the rush will continue for at least the week.
— With files from Eloise Therien, Global News and Kelly Geraldine Malone, The Canadian Press