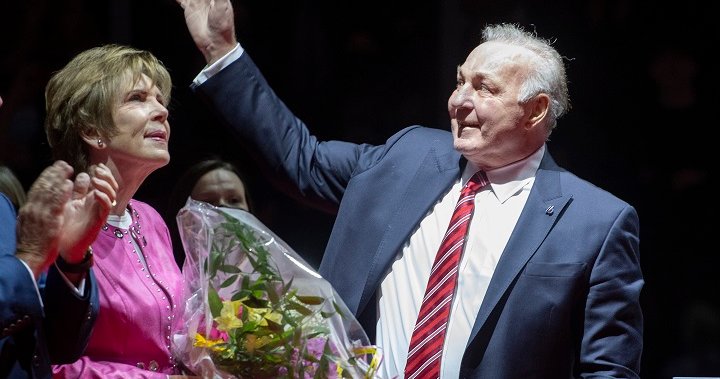 Guy Lafleur is never sure what’s around the next corner.

When his cancer treatments aren’t quite as draining, the Montreal Canadiens great has energy.

And then there are other times when all he wants to do is rest.

“I get the immunotherapy the first three weeks, and then the fourth week I have the big chemo,” Lafleur said of his regimen in a recent interview with The Canadian Press. “It’s the chemotherapy that really hurts you badly. There’s not a week that’s the same. The last two weeks, I was feeling very, very bad and sleeping a lot.

“But the last three days I feel a lot better — a lot of ups and downs.”

A cancerous white spot was discovered on Lafleur’s right lung by chance in September 2019 when he was undergoing quadruple bypass heart surgery. Two months later, the Hockey Hall of Fame winger went under the knife again to remove both the upper lobe of his lung and lymph nodes.

“I had no idea,” Lafleur said of his cancer, thankful it was caught early. “I maybe would have ended up with Stage 4 and maybe it would have been too late.”

But he received bad news in October 2020 that the cancer was back, which is when Lafleur began his current treatment.

“There’s not too many people that have a chance to grab it from the beginning,” said the 70-year-old Lafleur, who has partnered with Merck Canada for its new “Be The MVP” campaign to raise awareness about early lung cancer detection.

The Canadian Cancer Society estimates 21,000 people will die of lung cancer in this country in 2021 — some 25 per cent of all cancer deaths.

“Most people when they find out, it’s Stage 4,” added Lafleur, a chain smoker until quitting cold turkey due to his health concerns in 2019. “It’s not too late, because there’s miracles out there, and there’s people that are surviving.

“But it’s better to find out yourself.”

Lafleur, who won five Stanley Cups as part of the Canadiens’ dynasty of the 1970s during a sparkling career, continues to watch his old team with a keen eye.

The man nicknamed “The Flower” doesn’t attend many games — although Lafleur did get a thunderous ovation at the Bell Centre during last season’s improbable run to the final — but has been disappointed by a start that’s seen Montreal win just five times in 20 outings to sit 29th in the NHL standings.

“They went for the Stanley Cup and now are almost last place,” said Lafleur, who registered 560 goals and 1,353 points in 1,126 games with the Canadiens, New York Rangers and Quebec Nordiques.

“If you’re not ready and if you don’t have the right players, you’re not going to win.”

Montreal has, of course, been minus two big pieces in 2021-22. Canadiens captain Shea Weber is dealing with injuries that could force his retirement, while goaltender Carey Price entered a residential treatment facility for “substance use” prior to the season and continues to work his way back.

“That’s two big guys missing,” Lafleur said. “But it’s not normal to have losing streaks like that. Even if you’re missing two guys you should be able to compensate.”

While critical of the team’s on-ice performance, Lafleur has plenty of admiration for Price and winger Jonathan Drouin, who left the team last spring to deal with insomnia and anxiety, for addressing their mental health needs — and then sharing details publicly.

“They were hiding it for a while, their problems, but it came out and it’s going to help,” Lafleur said. “First of all, themselves. And also people will understand what they go through. It’s a good thing.

“They’re not the only two in the league, I’ll tell you that.”

Lafleur believes the Canadiens need to name a captain, with Weber on the shelf indefinitely. Gritty forward Brendan Gallagher is his choice.

“Right now,” he said emphatically. “Sorry for Shea, but he’s not playing. You need somebody that players look up to.”

“And Brendan … he’s the guy that shows up for every game, he pays the price every game.”

Meanwhile, the game’s declining interest among Quebec’s youth has pushed the provincial government to unveil a strategy aimed at increasing the number of Quebecers in the NHL.

Lafleur isn’t part of the committee announced last week, but he has a few ideas.

“Times change,” he said. “Minor hockey, it’s so expensive. For parents to bring their kids up to the junior (level), it’s unbelievable. In our day, we didn’t have that.

“It was not that much money because we didn’t travel much. Minor hockey, it’s organized like the NHL now.”

Lafleur also pointed the finger at some parents.

“They put so much pressure on the kids,” he said. “They think about winning the lottery if they make (the NHL).

“That’s why a lot of kids are quitting … there’s too much pressure. They have to perform all the time.”

Pressure to perform, however, comes with the territory for a storied franchise with 24 Cup banners.

“You have to go to war together,” Lafleur said of the current Canadiens. “Not one guy one night, two guys the next night. It’s 20 guys on the team, and you go out there and you do everything in your power to win.

“Montreal is the best city in the world to play in, if you win. If you don’t win, it’s hell.”

Lafleur has lived in his own form of that the last 26 months with his surgeries, the COVID-19 pandemic, the cancer’s return, and treatments that can take a heavy toll.

But the support of family, friends and fans — the Quebec Major Junior Hockey League retired his number last month _ has been immeasurable.

“I’ve been mostly stuck in the house since 2019,” he said. “Mentally, it’s tough. Hopefully I get through this and get out of it with a victory.

“It’s the hope for everybody that has cancer.”