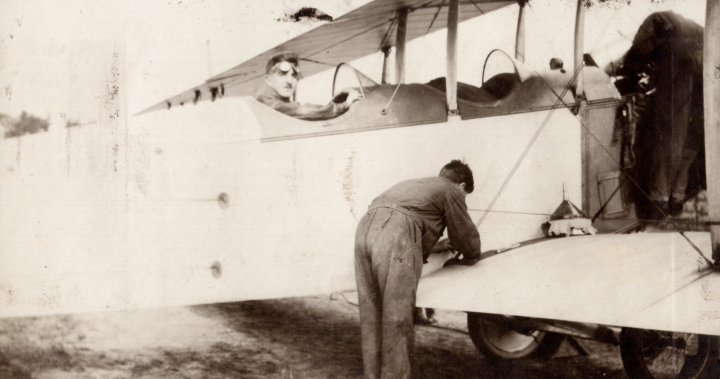 There were just 24 days left in the First World War when Lt. James Gordon Moore’s plane crashed near Boulogne, France on Oct. 18, 1918.

However, it wasn’t the impact that killed the Toronto pilot, but the severe burns he suffered when trying to drag his Australian colleague from the wreckage of the British Royal Flying Corps plane.

In fact, Moore – known to all as Gordon – would survive another agonizing 10-months in hospital in London, England, before passing away during peacetime on Aug. 13, 1919.

The story of his bravery, and his family’s pride and grief remained mostly forgotten until his cousin’s granddaughter, Maureen Kitchen, discovered a heart-breaking letter in her parents’ house a decade ago.

The letter was written by Moore’s older sister Thyrza, who had travelled from Canada to be at Gordon’s bedside in England.

In the letter, she told her sister Marjorie, “The major told me that Gordon changed as soon as he heard that I was on my way and was perfectly well and happy.”

“It just seemed that he could hold out for a little while to be with me and ’til he heard from home and knew we were all right, then he just suddenly collapsed, the strain was too much for the heart.”

Thyrza stayed with their British cousins when visiting Gordon in London.

“He was perfectly conscious and knew me, but could not speak, he was so weak. I just asked him if he knew me and he said ‘yes,’ and as (cousins) Eardley and Everilda knew he had only a few more minutes to live, they told me to leave him, as they didn’t want me to see him die, so I kissed him, and he said ‘Yes, goodbye,’” wrote Thyrza.

“Really Marjorie, it was awful to think that the worst actually happened. I felt so alone in a strange country and I felt so for you at home, but they were absolutely wonderful to me every one of them, and I will never forget their kindness to Gordon and I.”

Moore died in an auxiliary hospital set up in a building beside Kensington Palace.

Maureen Kitchen, who lives in Mississauga, Ont., says her family did not speak much about Gordon, or her great-uncle Midford who also died in the First World War.

For her, the letter revealed a family pain that had been sealed inside an envelope for decades.

“I went through and I opened all these envelopes that were 100 years old and I was reading the story and that was a horrible moment, when I read that letter,” said Kitchen.

“It’s one thing to say, ‘Oh, he died in a crash. And you know, it was terrible,’ but it’s quite another thing to read the letter that his sister wrote, and all the details, and it really made it very real to me, which it hadn’t before. I was quite distraught for quite a while after reading that.”

Lt. Moore was survived by his father and four sisters, who lived in Toronto.

Read more:
101 years commemorating the ‘Hedley Boys’ at one of oldest cenotaphs in Canada

“It devastated that family. And, you know, it was just so close [to the Armistice]. He almost made it back,” she said.

“You can tell, that letter, that really helped them deal with the fact that he was gone. He did not die in vain.”

Kitchen believes the deaths of Gordon and Midford had a profound effect on their family, which endures to this day, but she is thankful the letter has endured too.

The four-page letter says Moore received a military funeral, with a 240-gun salute.

According to the Canadian Great War Project website, he is one of 16 Canadians buried in Hampstead Cemetery in London, England, who died from injuries sustained in the First World War.