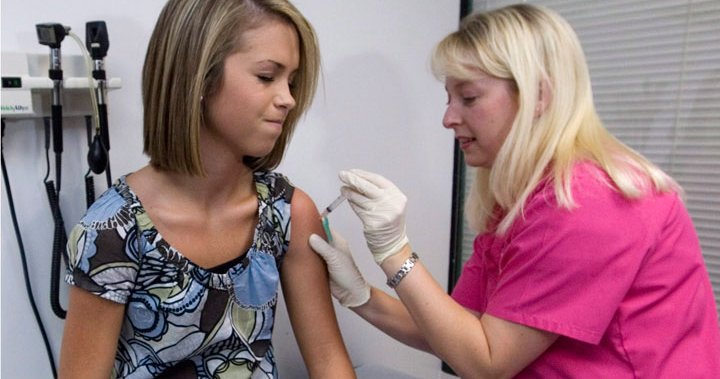 A U.K. study has found that cervical cancer rates were reduced by 87 per cent in women who were vaccinated against human papillomavirus (HPV) at a young age.

The study, published Wednesday in the Lancet medical journal, tracked English cervical cancer rates over time. It found that the incidence of cervical cancer was lower in age groups who had taken part in the country’s HPV vaccination program — which began in 2008 — than would be expected in an unvaccinated population.

To do this, they used data from a national registry that included every woman with cervical cancer in England between the ages of 20 and 64 years.

“We weren’t expecting it to be this high,” study co-author Lucy Elliss-Brookes told Global News. “It actually was a surprise to us and really good news.”

There are a few reasons why people who were vaccinated at younger ages seemed to have a lower cervical cancer risk, said Elliss-Brookes, who is the associate director of data curation at NHS Digital.

Vaccine uptake was significantly higher in younger age groups, she said, which would affect how many cervical cancer cases you would ultimately see in that cohort. Additionally, if people are vaccinated against this STI before they become sexually active, she said, this protects them from ever catching the virus — which the CDC says is the most common sexually transmitted infection.

To the best of her knowledge, this study is the first to directly show an HPV vaccination program’s effect on lower cervical cancer incidences, Elliss-Brookes said, partly because an age cohort has to be followed for years in order to get data. It can take years, or even decades, for someone infected with HPV to develop cancer.

And although this particular study looked at an earlier HPV vaccine, Cervarix, which has since been mostly replaced by Gardasil, Elliss-Brookes believes that the results are transferable. The original vaccine protected against two strains of HPV.

Gardasil still protects against those same two strains, plus additional ones, she said, so she expects the effect on cervical cancer would be similar.

In most cases, HPV infections go away on their own and don’t cause any symptoms, according to the CDC. Sometimes, the virus can cause genital warts. It can also lead to cervical and other cancers — sometimes years after the initial infection.

“Essentially, all cervical cancers are caused by human papillomavirus or HPV,” said Elizabeth Holmes, senior manager of policy and surveillance with the Canadian Cancer Society.

“That makes it one of the most preventable cancers in Canada,” she said. “And so that’s really why the HPV vaccine is so important to help protect you from HPV infection and to reduce your risk for cervical cancer.”

According to the Canadian Cancer Society’s estimates, around 1,400 Canadian women will be diagnosed with cervical cancer and 380 will die from it this year, Holmes said.

All Canadian provinces and territories currently offer HPV vaccines to both boys and girls through school programs, she said.

Older people within those age groups who weren’t vaccinated in school should ask their health-care providers about the shot as it’s still beneficial, although there may be out-of-pocket charges to get it, Holmes said.

“I think people don’t associate cancer with infection,” Elliss-Brookes said. “Obviously, not all cancers are caused by infection, but I mean, this is the fourth most common cancer in women in the world, and it is caused by an infection and that’s been known for some time.”

The World Health Organization and the Canadian Partnership Against Cancer have both set goals for the elimination of cervical cancer — with HPV vaccination as a key way of getting there.

Elliss-Brookes believes this could happen.

“I think this study suggests that it’s possible,” she said. “Even if we cannot stop the incidence completely, we can prevent people from dying from it.”