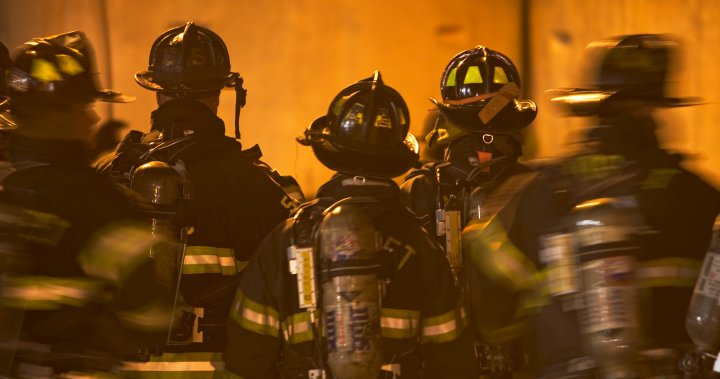 A rush of eleventh-hour inoculations sharply reduced the number of New York City emergency responders who failed to meet the city’s COVID-19 vaccination requirement as it began to be enforced on Monday, officials said.

The vaccination rate for all city employees, including police officers and firefighters, rose to 91 per cent from 86 per cent late last week, Mayor Bill de Blasio said over the weekend on Twitter.

De Blasio on Oct. 20 ordered the city’s 50,000 uniformed services workers, including emergency medical and sanitation employees, to have had at least one dose of a coronavirus vaccine by late Friday afternoon.

Enforcement of the mandate in the city of 8.8 million people was set to start on Monday, with de Blasio saying that employees reporting for duty who had failed to get immunized would not be paid.

Read more:
COVID-19 vaccines are now mandatory at some U.S. companies. Could Canada be next?

Union officials, who said last week at least one-third of firefighters and police officers were unvaccinated, predicted worker shortages as a result of the mandate, which eliminated a COVID testing alternative that they said had worked well.

At a pre-dawn briefing, Uniformed Firefighters Association President Andrew Ansbro predicted that dozens of fire companies would be forced to shut down, and urged the city to give his members more time to comply, NY1 TV reported.

But Ansbro added, “This is not a city in crisis.”

2:06
U.S. battle over vaccine mandates heats up despite declining infections

U.S. battle over vaccine mandates heats up despite declining infections

De Blasio, a Democrat, who had predicted a last-minute vaccination surge, said 2,300 workers were immunized on Saturday alone.

“More than half of the workers who haven’t been vaccinated yet have submitted exemption requests and those requests are being processed,” he said on Twitter on Saturday.

Workers with pending exemption requests will continue to be paid, officials have said.

The recent vaccination rate for the New York Police Department, which de Blasio put at 74 per cent on Thursday, was not immediately available.

The dispute in the largest U.S. city is the latest to erupt as vaccine mandates have been increasingly imposed by political leaders across the country, including President Joe Biden, to help stem the spread of the highly contagious Delta variant. Police officers and firefighters in Chicago and Los Angeles have also pushed back hard.

New York City police and firefighter unions have challenged the mandate in court. But the Police Benevolent Association of the City of New York said courts last week rejected its requests for an emergency order to halt the mandate’s enforcement.