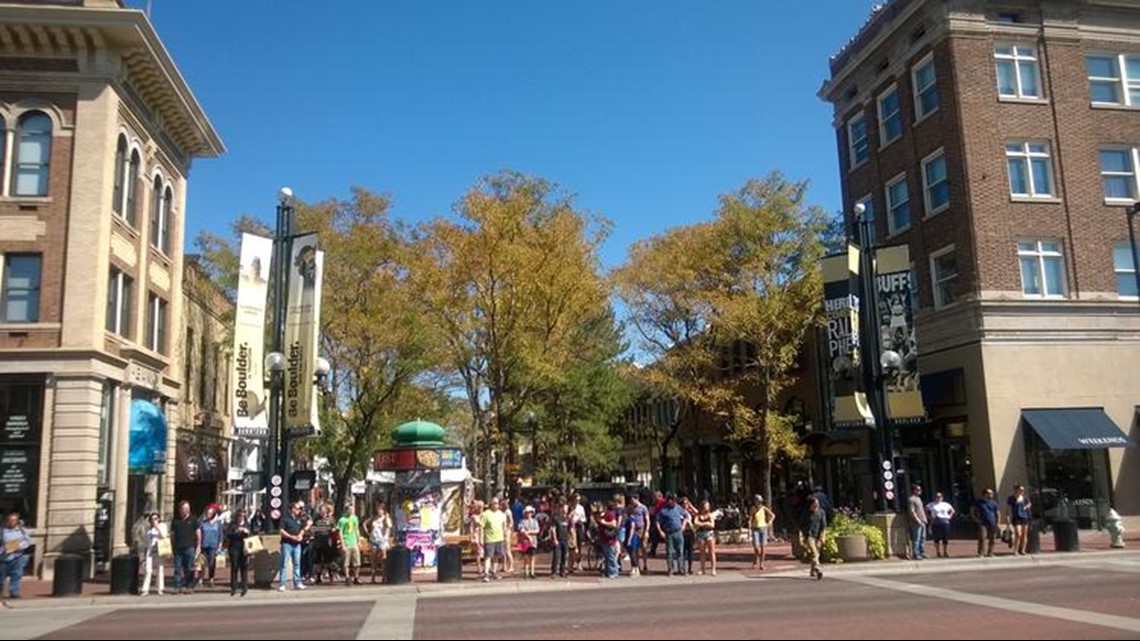 BPD said officers are reviewing drone footage from the gathering that grew to as many as 2,000 people.

BOULDER, Colo. — Boulder police are working to identify people involved in a large gathering that they said caused significant property damage to businesses at the Pearl Street Mall.

According to the Boulder Police Department (BPD), officers responded late Friday night and early Saturday to a gathering that grew to an estimated 1,000 to 2,000 people. BPD said the gathering prompted concerns about dangerous crowd conditions and reports of property damage to local businesses.

BPD said it started with a crowd of about 200 in the 1100 block of Pearl Street at around 9:30 p.m. By 11 p.m., BPD said, the crowd had more than quadrupled, and people were hanging from light poles and trees. Others went up on rooftops and damaged windows, tables, chairs and outdoor heating posts, according to police.

BPD said police responded with a large presence and began working to disperse the crowd. Many of the people appeared to be under the influence, according to police, but most of them responded to verbal commands.

Police said it appears some people were drawn to the area in response to social media efforts to bring back the Pearl Street Mall Crawl, a tradition discouraged by businesses and city officials in recent years due to safety and property damage concerns.

There were also public health concerns, BPD said, as unmasked people were very close to each other.

BPD said investigators will review drone footage to identify anyone who was breaking the law and arrest them.

“We recognize the negative impact a situation like this has on our local business community, which is already feeling significant pressure due to the pandemic,” Deputy Police Chief Stephen Redfearn said in a statement. “We will be using our investigative resources to demonstrate that there are consequences to destruction of property and other unlawful behaviors.”

BPD said the University of Colorado Boulder Police Department (CUPD) will be working with them on the investigation, and that students found to have violated the university’s student code of conduct or who broke the law will face disciplinary action from the university.

“We understand the desire to go out and have a good time on a beautiful holiday weekend,” Redfearn added. “The police department supports safe, responsible gatherings. What occurred on Pearl Street last night, however, posed significant danger to participants, resulted in unacceptable damage to property and required extensive police resources to address.”

Anyone who witnessed or experienced property damage is asked to contact BPD at 303-441-3333.