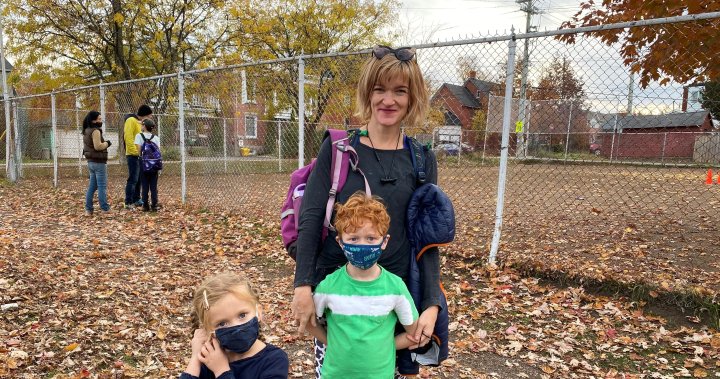 Kathryn Meisner, a mother from Toronto, estimates that her three-year-old daughter Astrid has been tested for COVID-19 about five times so far during the pandemic.

Astrid doesn’t have to get tested to attend daycare — she’s cared for by a mix of family and home care, but Meisner chooses to have her daughter stay at home and get tested whenever she has symptoms, like a cough or fever, that could indicate COVID-19.

“We err on the side of caution and we go to get a COVID test,” she said, to prevent her daughter from potentially passing on the virus to others.

“Then she goes through the tests and then we have to wait,” Meisner said.

Lately, that wait has been a bit less than 24 hours, which is an improvement, she said, but the family can’t count on this.

“We have to assume it’s going to be as long as 48 hours and we have to struggle for, scramble for, care for her, and to figure that out between me and my husband.”

Even though she runs her own business and her husband largely works from home, it’s tough to work and watch her child at the same time, she said. And while things have gotten better, many parents still have trouble managing the two.

My life since school started. Red Xs are when my son was home from school, whether because he had symptoms or one of us did and needed a COVID test. pic.twitter.com/JO2OvcFr6p

Anne Babcock, a mother of three from Ottawa, agrees.

“It’s impossible to work or just be sane and have kids at home,” she said.

“Especially at the beginning of the pandemic, when the screening rules were stricter, if anyone in the house had a runny nose, we all had to go get tested,” she said. “So as you can imagine, this happened probably every few months, right? Because kids get runny noses.”

2:16
Ontario to roll out rapid COVID-19 testing in select schools

According to Ottawa Public Health, a child who develops symptoms at school is isolated until a parent can pick them up. Then, they have to get tested for COVID-19 and can’t return to school without a negative test result, and not until their symptoms improve.

Many other cities, like Toronto and Vancouver, have similar policies, with some schools offering take-home tests for children to save parents the trouble of booking a test appointment.

Babcock remembers the first time she took the kids to get tested, she had to wait nearly five hours at the testing centre.

“I had to contain three children for five hours sitting on a cement bench at Brewer Park Arena,” she said.

Since then, testing has gotten better. She can now book an appointment without too much delay, she said, and results come back within 24 hours.

2:04
Half of Canadian parents with children aged 5-11 want them to be fully vaccinated

Christine Guptill, whose two daughters are old enough to be vaccinated, is still concerned that they might catch COVID-19 — both for their own health and because of their grandmother, who is immunocompromised.

When her husband, who is a nurse, brought home a virus that got the whole family sick, they all had to take tests and stay home, she said. It turned out not to be COVID-19, but was still disruptive, she added.

Guptill wishes that rapid tests were more widely available in Ottawa and that rules around using them were clearer.

“There is a lot of controversy about when and how rapid tests should be used, but it’s deeply, deeply frustrating to me, as parents, that we were all ready to go rogue on this about six weeks ago, and then the province said, ‘Please don’t.’”

The parents abandoned their plans to set up their own rapid test program, she said, but they haven’t heard anything since.

Things have gotten better for parents since the start of the pandemic, Meisner said, but there’s still a long way to go.

“I think the fact that we’re dealing with these issues almost two years into a pandemic really shows where the cracks in the system are both in terms of supporting parents in the workplace,” she said.

Employers should plan for and allow for time for COVID-19 tests and childcare, and governments should integrate rapid testing into their school strategies so parents’ lives are less disrupted, Meisner said.

Right now, she said, every time her daughter has a cough, “it almost feels like it’s back into the beginning of the pandemic.”