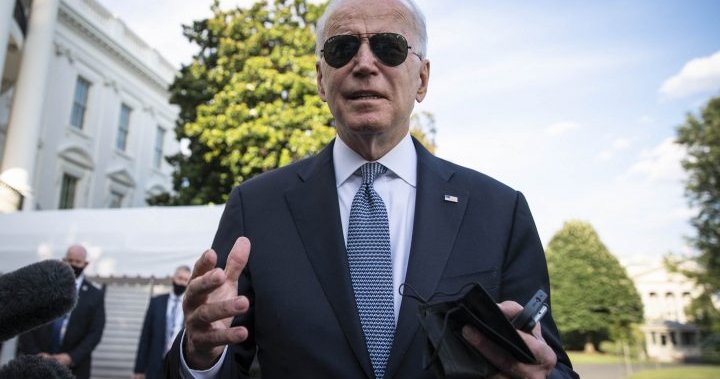 NEW YORK (AP) — Joe Biden wagered his campaign and now his presidency on the premise that government itself could still work, even at a time of fractious political division.

When the Senate voted this week, with bipartisan support, to begin work on an infrastructure bill that Biden supported, he seemed to have proof of the concept.

But the triumph was overshadowed by the surging delta variant of the coronavirus that has forced the restoration of mask guidelines, imperiled the nation’s economic recovery and threatened Biden’s central promise that he would lead the United States out of the pandemic.

“Democrats have to put wins on the board going into 2022, and COVID clouds on the horizon make getting infrastructure and reconciliation done all that much more important,” said Robert Gibbs, former press secretary to President Barack Obama. He added that it’s “imperative for the Biden administration to communicate on this regularly and prepare for us for the ups and downs of this pandemic.”

The president’s first six months in office, for which he has received strong marks in most public polls, featured the full vaccination of more than 60% of Americans, the creation of more than 3 million new jobs and the passage of a sweeping $1.9 trillion COVID-19 relief bill. And in recent days, he has made progress along the massive, two-pronged infrastructure track that could pour $4.5 trillion into the United States economy while he also eyed future moves on voting rights and immigration.

2:40
White House urges people to get vaccinated in light of Delta variant spread

But the virulence of the delta strain coupled with stubborn vaccine hesitancy among a significant portion of the American population has raised alarms about another punishing wave of the pandemic, a prospect that has rattled financial markets already nervously eyeing the possibility of long-term inflation.

And now Biden has entered a more challenging phase of his presidency as the virus has once more proved to be an intractable foe that now endangers the nation’s fragile return to normalcy.

“I know this is hard to hear. I know it’s frustrating. I know it’s exhausting to think we’re still in this fight,” Biden said to reporters at the White House on Thursday. “And I know we hoped this would be a simple, straightforward line, without problems or new challenges. But that isn’t real life.”

At the same time, the administration response has hardly been seamless. It has been criticized about its messaging on the virus, including confusing guidance this week as to when and why vaccinated people would need to resume wearing masks indoors.

In front of 1,000 mask-free people at the White House, Biden had decreed July 4th to be the day that America declared its “independence” from the virus. But just weeks later, staffers and journalists working at the White House were required to don face coverings again, regardless of their vaccination status.

And across the country, Americans who reveled in a return to normalcy are now being asked to wear masks again, stirring resentment in some of those who have followed health guidelines throughout the pandemic, including getting the shot. And the rollback calls into question whether the Biden administration had been too quick to relax guidelines and now risked losing some of the public’s confidence.

To be sure, though, the vaccine hesitancy has been most pronounced in areas strongly associated with support for former President Donald Trump, and some conservative media outlets have amplified the wariness.

Any president must be able to set aside the most organized, carefully laid plans to deal with a sudden crisis. Trump was overwhelmed by the pandemic, his best reelection argument — a strong economy — vanishing overnight while his administration’s erratic and sporadic response to the virus was judged harshly by voters.

Biden’s White House is more methodical and spent months carefully working on its infrastructure plan, which the president has prioritized for months even amid calls from some in his own party to focus on voting rights. The strategy was crafted to reach a bipartisan agreement by persuading at least 10 Republicans to lay down their partisan arms to reach a deal on so-called hard infrastructure — highways, broadband internet access, mass transit _ while then proceeding on a larger, Democrats-only budget reconciliation vote for the rest of the plan.

Though the negotiations were left for dead more than once, Biden’s bet on reaching across the aisle paid off, as 17 GOP senators voted to advance the nearly $1 trillion bipartisan plan. It marked a significant win for the White House, even as numerous twists and turns surely lie ahead, including keeping all the Democrats in line for the $3.5 trillion reconciliation plan.

Biden had framed it as necessary to prove that the two parties could still work together, a demonstration that democracies could still deliver for their people.

“Our economy grew more in six months than most Wall Street forecasters expected for the entire year before we implemented our plan,” said Biden, who predicted that the infrastructure deal is “going to continue this momentum over the long term by making the most significant investment to rebuild America in nearly a century.”

Biden has pushed his broadly popular agenda directly into conservative strongholds — he has held about a half-dozen events in Republican-controlled districts in recent weeks — in an effort to paint Republicans as the party of no while hoping to rein in their turnout next fall when he tries to help preserve threadbare Democratic majorities in Congress.

0:22
Biden says it’s ‘still a question’ whether federal government can mandate vaccines for everyone

With a wary eye on inflation, the president is betting that voters will reward him for his policies, as the White House argues it is Republicans who are running solely on identity politics rather than sincerely delivering for their voters.

But that strategy depends on the policy working — which is what makes the virus so dangerous.

If another wave causes businesses or schools to close, not only would the public’s faith in Biden’s management of the virus surely waver, but the economic recovery would also likely stagnate, jeopardizing the Democrats’ central arguments heading into next fall’s midterms.

“We’re not out of the woods,” Gibbs said.