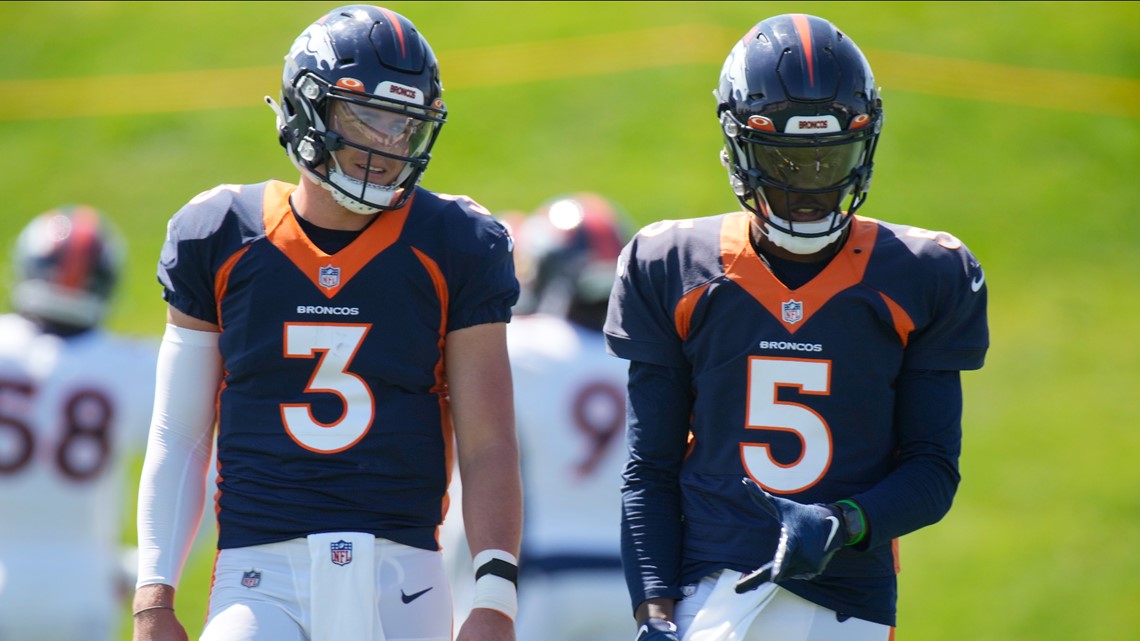 Lock wasn’t around to receive his in person as he’s isolating away from Broncos headquarters with the COVID-19 virus. This is not the only reason why Bridgewater just had a better year.

Bridgewater won the quarterback competition from Lock back in late-August. Teddy B’s play has earned him the right to keep it. He is the NFL’s 10th-ranked quarterback through 9 games with a 101.2 passer rating and is third in completion percentage at 70.2.

The Broncos haven’t had a QB rank in the top 22 since Peyton Manning in 2014, the season before he retired. Last year, Lock ranked 32nd in passer rating and last (35th) in completion percentage.

It didn’t hurt Bridgewater that he turned 29 on Wednesday while Lock is only 25. Age is the most obvious indicator of maturity, with experience being the second. Maturity can be a desirable characteristic for quarterbacks and Bridgewater oozes with it.

Listen to his response when asked about the Broncos’ staying focused for their game Sunday against the 3-6 Eagles a week after stunning the 6-1 Cowboys in Dallas.

“You’ve got to respect the game, respect the opponent,’’ Bridgewater said. “And never forget that dark place we were in a couple weeks ago. This is a time in sports where it can be dangerous. Just a couple weeks ago we were hearing, “You guys suck. Get rid of this person. Trade this guy.’ And then you win a game or two and it’s like, “Oh, you’re the best.’

“You’ve got to ignore it all. Because in this game there’s going to be highs and there’s going to be lows. I think when you go through those moments when you’re losing, it will test your character. With us, a test of our character was those four weeks where we didn’t come away with a win. And then to come away with two wins in a row, that’s a test of character, also. How are you going to respond? Are you going to feel like we’ve arrived, or approach it like, ‘Hey man, our job is not done.”

Twice this season, the Eagles nabbed a rookie Broncos’ cornerback before Denver got a chance to play him. The first was undrafted rookie Mac McCain III, who was signed off the Broncos’ practice squad before the season opener. McCain was on the Eagles’ active roster until Tuesday, when he was waived. Eagles coach Nick Sirianni said during a conference call with the Denver media Wednesday his team hoped to sign McCain back to its practice squad if he clears waivers.

McCain didn’t. Who claimed him? The Broncos of course. McCain now goes to the Broncos’ 53-man roster. Turnabout is fair play, especially when the Broncos play the Eagles this week.

“Mac did really good here, we’re hoping to get him back to be honest with you,’’ Sirianni said Wednesday morning before learning McCain was claimed by the Broncos. “We just felt like that is such an important position that cornerback position so we had an opportunity to get both those guys on our roster, we took advantage of it, because they both have a lot of talent. And as I’ve gotten to know both those guys they have high football character as well and looking forward to work with both those guys. We saw the talent with the preseason games, particularly with Mac, and then the speed with Kary so we’re excited to have him on our roster.”

Bridgewater started his press conference Wednesday wearing a blue mask, then took it off in the midst of his opening statement. As a semi-close contact with the infected Lock, Bridgewater has to test negative five straight days. Increased mask wearing isn’t the only enhancement protocol the Broncos have put in place now that five players – Netane Muti, Noah Fant, Drew Lock, Justin Strnad and Michael Ojemudia – tested positive over a recent 2-week period. Muti and Fant have been cleared from COVID-19, although Muti had a roster exemption until Thursday.

“After five days I should be in the clear from wearing the mask and everything,’’ Bridgewater said. “What we’re doing here in Denver I think is smart. We’re taking the right measures. We’re taking a preventative approach in catching this thing before it spreads. We’re spaced out in meetings now, like offensively we’re meeting in the indoor facility. Making the meeting rooms bigger. And enforcing guys wearing the masks. Even if you are vaccinated.’’

Broncos receiver Jerry Jeudy was an Alabama receiver teammate and fellow 2020 first-round pick of Henry Ruggs III, who was driving at nearly twice the legal alcohol limit and at 156 mph seconds before he crashed into another vehicle resulting in the death of a young woman and her dog: “I haven’t talked to him about that. It’s a bad tragedy. He made a mistake.’’ …

The Broncos signed cornerback Duke Dawson Jr. back to their practice squad. …