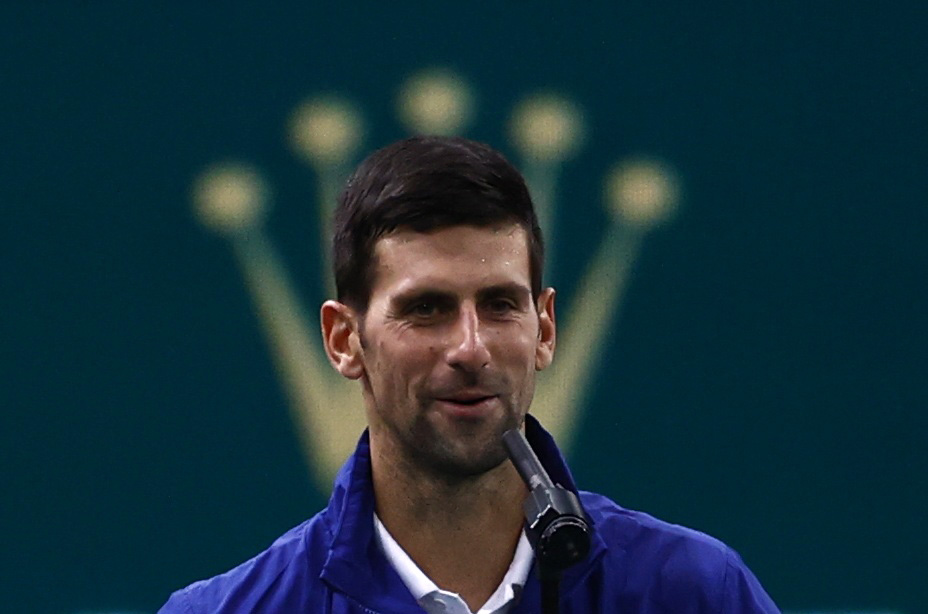 ATP Masters 1000, November 5, 2021. Serbia’s Novak Djokovic during an interview after winning his quarter final match against Taylor Fritz of the U.S. REUTERS/Christian Hartmann

Medvedev outclassed Gaston 7-6(7) 6-4 after he clinched a knife-edged opening set.

On Saturday Djokovic will meet Polish seventh seed Hubert Hurkacz, while Medvedev clashes with either German Alexander Zverev or Norway’s Casper Ruud, who meet in the last quarter-final later on Friday.

Djokovic and Fritz traded fierce ground strokes in the first set before the 20-times major winner broke serve at 3-4. Fritz broke back immediately but Djokovic’s supremacy from the back of the court finally told as he clinched the opener in 38 minutes.

“I was absent from the Tour for two months, coming into this tournament, and the last competitive match I played was in the U.S. Open final, compared to the other guys playing one or two events prior to Paris,” said Djokovic, who lost to Medvedev in the final at Flushing Meadows.

“I knew that I needed to start well, with good intensity and put in a lot of hours on the practice court. But it’s different when you play points in a competitive match.”

The pair again exchanged service breaks at the start of the second before Fritz blew a chance at 1-1 with Djokovic down 15-40. The Serb seized control after overcoming that minor blip, winning 12 of 14 points from 2-2 to register his fifth straight win over the 24-year-old American.

“I did have ups and downs. I am not really pleased with the way I closed out the sets. I lost my serve to love (at 1-1), then (at) 5-3, again, I served for it with new balls and lost to love again. Those things shouldn’t happen,” added Djokovic.

Medvedev double-faulted to hand Gaston a 5-4 lead in the opening set and then saved three successive set points on the Frenchman’s serve to force a tiebreak as the next two games went with serve.

More spectacular shots and nerve-jangling action followed as Gaston saved a set point with a delicious backhand winner before Medvedev eventually clinched the hour-long set with a service winner which silenced vocal home fans in Paris.

The Russian raced into a 4-0 lead in the second set but 21-year old Gaston, who rallied from a 5-0 second-set deficit to beat Spaniard Carlos Alcaraz in the previous round, won the next three games and got the crowd back on their feet.

But Medvedev then held his nerve and serve, sealing the pulsating contest with a forehand crosscourt winner in a jittery final game in which he double-faulted on his first match point.

Earlier on Friday, Hurkacz dug deep to force James Duckworth into submission 6-2 6-7(4) 7-5 and book a clash with Djokovic.