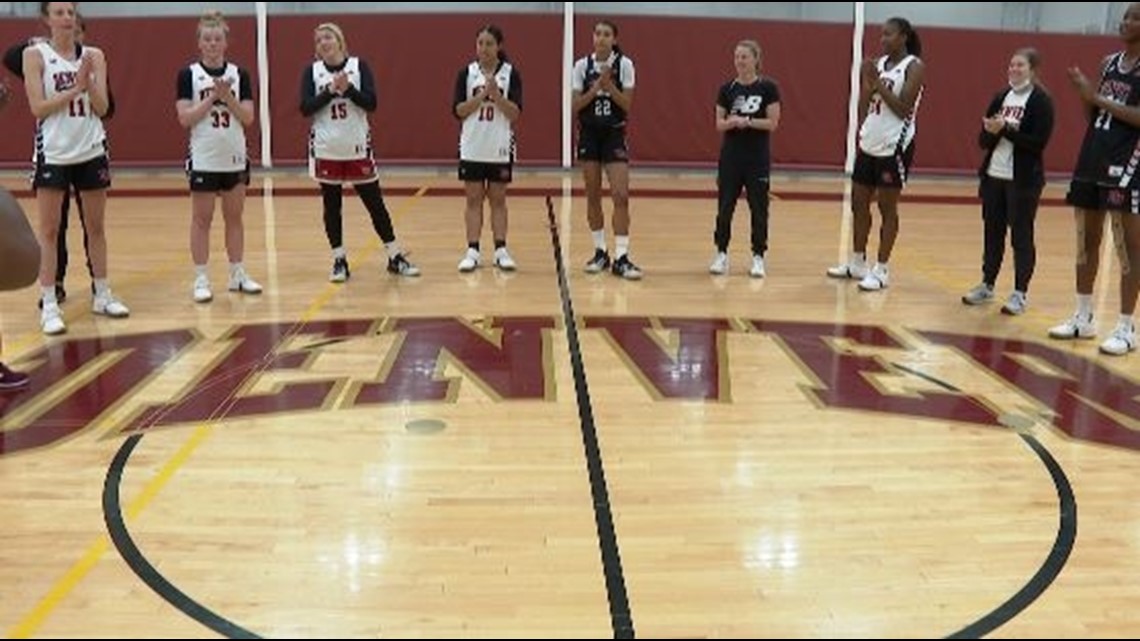 DENVER — Athletes are as multidimensional as the spherical shaped balls they live and die by.

And when it does stop dribbling, the Pioneers of the University of Denver will be prepared for both jobs and for handling life’s hardest topics. That’s because DU women’s basketball head coach Doshia Woods has been readying her players for life beyond the ball.

“I created Life 4.0, honestly, it started with the social justice issue [last summer]. I knew a lot of it will kind of run dry and I wanted to have a space to talk about it,” Woods said. “Then, I have a huge passion for mental health and I don’t want that to be a stigma with our program and I wanted a way to keep the conversation going all year.”

Junior guard Meghan Boyd is known for her true three-pointer and her loud smack talk on the court, but she isn’t as familiar with vulnerable conversations.

“I’ve never really talked about life and basketball in the same sentence,” Boyd said. “And especially to have a coach that’s willing to bring up things like that, that not everyone is going to be comfortable talking about, I think it just really helps us come together as a team.”

Through weekly guest speakers, the Pios hear from industry professionals about potential job opportunities, and also have the chance to ruminate about the latest hot topics.

“I think in this Life 4.0, she’s challenging us to be vulnerable, and just to speak on our perspectives,” senior guard Anna Jackson said. “She’s not pushing her agenda on us, she’s just pushing the conversation.”

Some notable speakers included Abby Wambach, a two-time Olympic gold medalist with the US Women’s National Team (soccer), Kate Fagan, a former CU women’s basketball player turned ESPN analyst, and most recently
Brenda VanLengen, a basketball analyst who is creating a documentary about the history of women’s basketball called ‘If Not For Them,’ which will feature a scene shot on DU’s campus.

In her first year coaching the Pios–albeit in a COVID year–Denver finished 7-16. While Woods and her staff wish to flip that record around, their coaching priorities lie in a more holistic approach.

“Obviously we want to win basketball games, but DU is super supportive of me as a coach and running this program and I want to build it the right way,” Woods said. “I want to build something that will last, and culture is a big part of that. Building those relationships takes time, and I wanted the opportunity to do that.”

Through the culture she’s already cultivated, Woods is building her own version of a championship program.

“The best compliment that I often get when people come and watch practice is the connection they can tell between our players and staff,” she said. “For that, I don’t know how many games we’re going to win, but I know we’re winning every day when we have that connection and chemistry.”