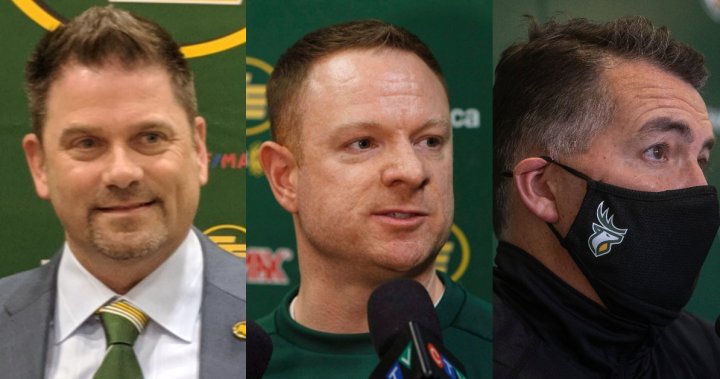 After one of their worst seasons in decades, the Edmonton Elks have fired the head coach and top office bosses.

Effective immediately, the contracts have been terminated for president and CEO Chris Presson, general manager and vice president of football operations Brock Sunderland and head coach Jaime Elizondo, the board of directors of the Edmonton Elks Football Club announced Monday.

“After considerable discussion and consideration, the board of directors determined our significant on- and off-field problems required changes at the senior leadership level in order to rectify the short comings and rebuild the trust and confidence of the Elks fans and community,” Elks board chair Ian Murray said Monday afternoon.

The three were told about the decision Monday morning, Murray said.

The news came after 3-11 season which saw the Elks finish in last place in the overall standings, but the team’s struggles weren’t only on the field. At the beginning of November, Presson apologized to fans for not only the on-field performance, but also struggles the team had with customer service and the implementation of COVID-19 policies.

“It would be inappropriate to pick one thing or even pick one or two things (that went wrong),” Murray said. “It was really an accumulation of things.

“It got to the point where we really felt that we got to a situation as an organization where we needed a different leadership team to get us out of the circumstance and to turn things around in a timely manner.”

Murray extended his thanks to Presson, Sunderland and Elizondo during the news conference.

“All three have contributed a lot to the CFL and the game of football and I’d like to thank them all for their time spent with our club.”

Read more:
Elks look back on a season which fell way short of expectations

The board said the search has begun for permanent replacements of the CEO and general manager. In the interim, Allan Watt, the team’s executive director of marketing, has been named interim chief operating officer.

“Allan has a long history with our organization and the community. His understanding of the Edmonton sports market is second to none. I’d like to thank him for his willingness to continue to support our organization and steward the Club through this transition period,” Murray said.

“The board is aggressively working to have a new CEO in place by the end of January,” the news release said, adding talent acquisition firm Gallagher, previously Optimum Talent, will donate its services to the club.

3:54
‘A lot of work has to be done’: Edmonton Elks interim COO on making football team great again

‘A lot of work has to be done’: Edmonton Elks interim COO on making football team great again

The board said it has contracted long-time CFL player, coach, GM and executive Wally Buono to consult and advise the club in hiring a new general manager — expected to be named before the end of 2021 — so the team is well prepared for the beginning of free agency in February.

“Wally is unrivalled as a winner in this league and we have every confidence that with his help we will find the general manager that will lead this team back to excellence,” Murray said.

“We are pleased that Wally has agreed to set aside his traditional competitive feeling against Edmonton and to help us with this important task.”

Teams in the CFL have an operations cap – essentially a salary cap for coaches and managers – and the Elks’ will be affected by these changes, but the club couldn’t say what that will look like yet.

“Yes it’s a factor,” Murray said. “Yes it will have some adverse impact. The extent, I wouldn’t be in a position today to tell you.”

Murray added the Elks are in discussions with the league regarding that cap, but didn’t say what those discussions were.

0:57
Where did it go wrong? Edmonton Elks board chair on decline of football team

Where did it go wrong? Edmonton Elks board chair on decline of football team

The board acknowledged the past 18 months have been an exceptionally challenging time for the organization, “but none more so than for its fans, season seat holders and the community.”

“The club will be actively engaging with fans, season seat holders and key stakeholders to learn from their experiences to help with a quick rebuild on and off the field for the 2022 season,” the news release said.

Watt will lead a “proactive customer service engagement process” that will see the club reaching out to fans and key stakeholders.

2:14
Reading the room: Edmonton Elks board chair on fan disappointment with football team

Reading the room: Edmonton Elks board chair on fan disappointment with football team

“We want to learn their experiences and to help build on their views and lead to a quick rebound on and off the field for the 2022 season,” Murray said.

Watt said the team is seeing some season ticket holders renew for next year and are reaching out to those who haven’t yet to find out why.

He told reporters he didn’t have a percentage of how many people had renewed their season tickets, but said the team would be in the business of finding more people to sign up to be season seat holders.