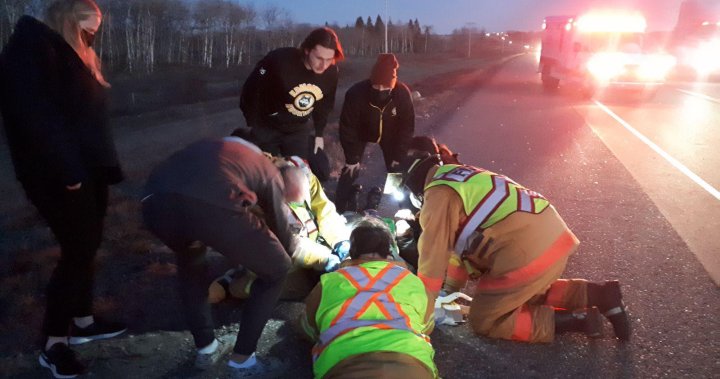 It’s a case of being in the right place at the right time.

Members of the Edmonton Huskies junior football team sprung into action Sunday night, when their bus came upon the scene of a motorcycle crash in Saskatchewan.

The motorcycle had collided with a deer just before 6 p.m. CT, about four kilometres east of Borden on Highway 16, according to the local fire department.

“When we were pulling up, it looked a little chaotic — there were people already trying to help,” Huskies general manager Jason Lorrimer told Global News on Monday.

“(We’ve) got 40 strong guys that can move anything we need and I’ve got trainers to deal with trauma.”

Lorrimer said he asked his athletic therapists if they would help out at the scene “And they said, ‘absolutely.’”

The team was just settling in for the five-hour drive home on the Yellowhead after losing 33-31 to the Saskatoon Hilltops in the Prairie Football Conference semifinal.

Sheldon McNabb, a defensive back for the Huskies, said a number of the players had just started playing video games when they came across the scene.

“I saw that the trainers were going out,” McNabb said, adding he’s been studying to become a paramedic and has some practicum experience.

“I thought that with going to school for it, (I would try to) help in any way I could,” he said, adding he grabbed blankets to keep the victim warm. “He was grateful.”

Huskies athletic therapist Randy Kuefler said when he first approached the victim, he told him what training he had and that he would like to help — something all people with first aid training are supposed to do.

“We just wanted them to be taken care of,” he said.

“We showed up just at the right time.”

Kuefler said when firefighters arrived, they requested he remain with them until a STARS Air Ambulance helicopter arrived to airlift the victim to hospital.

“Having other trained medical people is really good,” Borden Fire and Rescue captain Jamie Brandrick said. “I asked them if they would stay.”

“It helps us. The person was calm — that makes it easier for us to do our job.”

Read more:
‘It’s like a miracle’: Prince Albert, Sask., teen recovering in hospital after being hit by vehicle

Brandrick said having more people with first aid training on scene helps when rolling a victim on their back to avoid spinal cord trauma, or prevent further damage.

“Thankfully the injuries aren’t that severe,” the firefighter said, while also noting the trained members of the Huskies would have been able to help with CPR if the victim had not been breathing.

“Seconds are valuable to saving a life.”

.@Edm_Huskies were on the bus coming home from Saskatoon, Sunday night. They came across a motorcyclist injured after hitting a deer. Trainers with first aid experience jumped into action and helped the man before and after the Borden fire dept. arrived. More on @GlobalEdmonton pic.twitter.com/ALTQeMPSQb

McNabb said he has questioned in the past if he really wants to become a paramedic, but Sunday’s events have given him more to think about.

“It might be a little bit of a sign that I need to keep going with it and take that path,” he said. “It kind of puts into perspective that we’re more than just a team.

“We did what any person would do… (but) it really reinforces that team and family aspect that the Huskies have, and it feels nice.