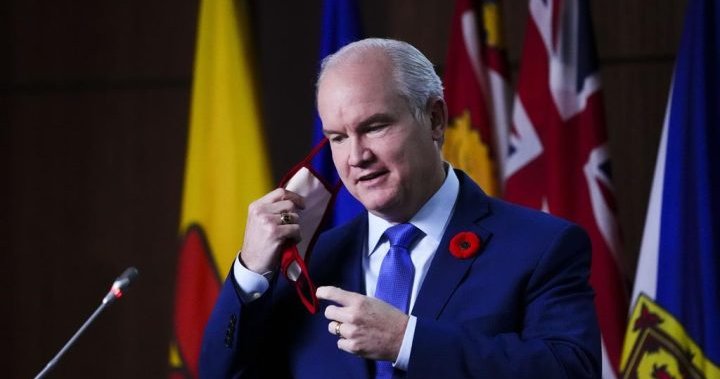 Conservative Leader Erin O’Toole said comments about vaccines by some members of his caucus are not helpful and are spreading uncertainty about immunization against COVID-19, but he will deal with those issues with his team in private.

The move to distance himself from such comments is the latest development on the issue of mandatory vaccinations for the Conservative leader, who has struggled for weeks to put a lid on questions about where he and his party stand. Some of his MPs are ardently against such policies, while others see it as a lesser issue.

On Monday, O’Toole told a news conference in Ottawa that Ontario MP Marilyn Gladu’s comments during an interview on CTV’s “Question Period” caused confusion with respect to the health and well-being of Canadians.

During the interview that aired Sunday, Gladu compared COVID-19 to polio when it spread during the first half of the 20th century, but claimed the novel coronavirus doesn’t pose the same “frequency of risk” in terms of deaths or disabilities.

“There’s a big difference between advocating for your constituents who may need reasonable accommodation,” said O’Toole.

“It’s very different to cause confusion with respect to the health and well-being of Canadians. Ms. Gladu’s interview did that yesterday and it’s not appropriate at a time we should be answering questions about vaccine hesitancy, not creating new questions,” he said.

“Our team will deal with this as a team because we respect one another and we have these discussions in caucus, but let me be crystal clear: The Conservative party encourages people to vaccinated.”

The leader was also asked about comments by Conservative MP Leslyn Lewis – a former leadership rival and favourite of the social conservative wing of the party – who has questioned on social media the efficacy of vaccinating children, and Dean Allison, another Ontario MP. He has hosted broadcasts with scientists who compared natural immunity to vaccinations.

“It’s a great example of why members of Parliament, of all stripes, should let the professionals, let the public health officials, let the physicians answer questions about efficacy of vaccines or provincial programs on vaccination,” said O’Toole.

The Conservative leader also cautioned that the pandemic has seen the creation of “instant experts” on social medconia.

“I don’t think that helps in our public discourse. I’ve tried consistently for a year not to politicize questions about vaccines; to try and find ways to answer questions and reduce hesitancy.”

The Conservative leader has refused to say how many of his MPs are vaccinated. On Monday, he continued to say that all Tory MPs and senators “participating” in Parliament will be vaccinated.

While O’Toole has said he supports a full in-person return to Parliament, the Liberals and NDP have supported a hybrid approach with some virtual participation.

It’s possible that some Tory MPs will stay home when the House returns Nov. 22.

An analysis by The Canadian Press shows at least 82 of the Conservatives’ 119 elected members, including O’Toole, are double vaccinated against COVID-19. At least two say they can’t be vaccinated for medical reasons and several others say they don’t disclose their status because it’s their private health information. The remainder have yet to respond.

Gladu announced last week she is forming a “mini-caucus” within the Conservative cohort to advocate for those who are losing their jobs because of vaccine mandates. She has said the group isn’t intended to challenge O’Toole’s leadership and won’t contradict his positions.

Gladu, Lewis and Allison did not immediately respond to requests for comment Monday.