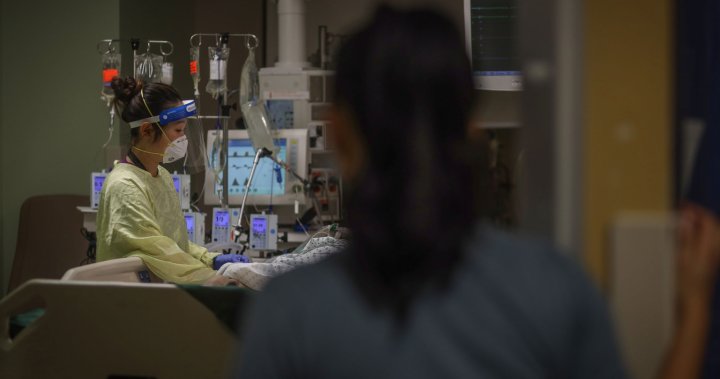 Dr. Nili Kaplan-Myrth never thought this would be part of the story that is the COVID-19 pandemic in Canada.

The online hate and harassment she and her colleagues have received over the last 20 months has been distressing, and it reached a tipping point for the Ottawa-based family doctor last week.

On Nov. 1, Kaplan-Myrth said she received an emailed letter disguised as a complaint to Ontario’s physicians’ regulator. In it, was a threat. She said the sender threatened to kill her for her work vaccinating her patients and advocating for inoculation.

“When the pandemic first started, we were worried about whether or not we would live because we feared we would get COVID just doing our work,” Kaplan-Myrth told Global News, adding she’s felt pride for getting so many vaccinated throughout the pandemic.

But that “relief then gets sort of crushed by this horrible feeling that there’s somebody out there … sending a letter saying that I should be killed.”

Kaplan-Myrth is among a number of Canadian doctors facing continuous hate and harassment online, stemming from COVID-19 and vaccine advocacy. Many are calling on governments to increase protection for health-care workers.

Dr. Naheed Dosani, a palliative care physician in Toronto, told Global News he has been the target of racist attacks online. He’s noticed the messages have become more vitriolic as policies, like Ontario’s recent decision to not mandate vaccination for health-care workers, have come into effect. The mandate was something Dosani had been a vocal advocate for.

“I have to say that there is an association with the anti-vaccine movement and the racist comments and hatred that I receive,” he said.

“Being called racial slurs, being told that I need to watch my back … This isn’t fair, because if this happens to any health worker, it means that our entire industry, our entire sector, is at risk.”

In Brighton, Ont., Dr. Michelle Cohen told Global News she has had to change her notification settings on social media to avoid seeing hateful messages.

“I’ve had some very nasty trolling, just repeated comments about, ‘How are you a doctor? I feel so sorry for your patients, you must be doing things that are terrible, you’re a horrible person,’ and there are lot of misogynistic and antisemitic smears, in particular, that are targeted to me personally,” she said.

Read more:
Trudeau, Singh want to criminalize protests that block hospitals. But can they?

In Whitehorse, Yukon, pediatrician Dr. Katharine Smart, who is also president of the Canadian Medical Association, told Global News she feels the majority of Canadians still see them as health-care heroes, but the vocal minority is “distressing.”

“I’ve received multiple messages … both on Twitter and Instagram, calling me names, accusing me of harming people, threatening me, and of course, this generally relates to tweets or Instagram posts that promote vaccination,” she said.

“That’s again, unfortunately, what brings that anti-vax movement out – when you’re out there trying to educate the public, trying to provide accurate information, and then these people come out in droves and it can be quite relentless at times and it’s very distressing.”

Smart and other doctors are calling on governments to introduce legislation that protects health-care workers from harm.

After his summer re-election, Prime Minister Justin Trudeau told reporters in September that among the priorities for his new minority government is to bring in laws to protect health-care workers from harassment and intimidation through changes to the criminal code.

The promise came after rallies were held outside several Canadian hospitals on Sept. 13 by supporters of a group called Canadian Frontline Nurses, which organized the protests to stand up to the “tyrannical measures and government overreach” of the most recent public health measures including vaccine passports.

Some of the protests attempted to block entry to hospitals, putting both the employees and patients at risk.

Provinces have made promises similar to Trudeau’s — both the Ontario NDP and Liberals introduced bills to create safety zones around institutions such as hospitals to protect them from anti-vaccine harassment, and Nova Scotia recently passed legislation to establish a 50-metre “safe access bubble” around hospitals and other facilities, such as doctors’ offices, where protests won’t be permitted.

Moreover, several officials spoke out against the Sept. 13 demonstrations, including Ontario Premier Doug Ford who called the protesters “selfish, cowardly and reckless” in a tweet the day before.

The doctors who spoke to Global News said they appreciate the support and intention from governments to protect health-care workers, but that it’s time for action — now.

“We need clear messaging from governments that any harassment or bullying of health-care professionals or anyone is unacceptable,” Smart said.

“We’ve seen some talk about legislation to make these things illegal, and I think that needs to move forward. We need safe zones around hospitals, but we also need clear legislation saying that online harassment and bullying is not acceptable in this country and it will not be tolerated.”

To avoid seeing hateful messages, Kaplan-Myrth says she no longer allows people to comment on her Twitter page unless she follows them.

She also said she’s grateful to her colleagues for the support she’s receiving.

“What I should be feeling is hope because we’ve got the vaccine, we’re going to be able to immunize kids soon, and it’s going to be the next step towards ending this pandemic.”