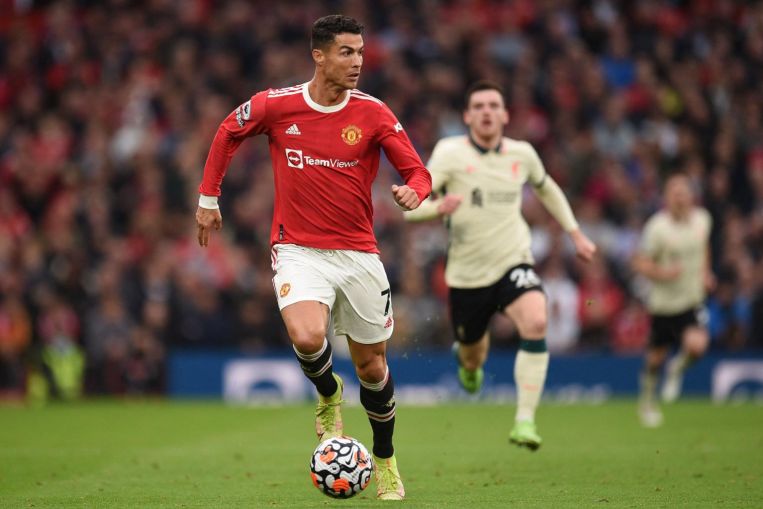 LONDON (AFP) – Manchester United’s re-signing of Cristiano Ronaldo appeared to be a no-brainer – the galvanising return of a club great with the swagger of a proven winner and guaranteed goals.

But is it more complicated than that? Is the presence of the Portuguese superstar at the fulcrum of the attack helping or hindering the team, who have made a stuttering start to the season?

United are preparing for Tuesday’s (Nov 2) Champions League encounter against Atalanta after a morale-boosting 3-0 win against Tottenham that helped ease the pressure on manager Ole Gunnar Solskjaer after their 5-0 hammering by Liverpool.

Ronaldo will go into the match on a high after ending a mini-drought in the league, scoring a superb volley and setting up Edinson Cavani for United’s second.

His Premier League return so far has been solid rather than spectacular by his own standards – four goals in seven Premier League matches – less than half of Mohamed Salah’s haul of 10 for Liverpool.

But he has made the difference in the Champions League, twice scoring dramatic late winners, against Villarreal and Atalanta, to haul United to the top of Group F.

Despite his goals, Ronaldo has been criticised for his lack of defensive work in a team that has kept just two clean sheets all season.

There have been hints that some of his teammates at previous club Juventus felt the same way but the former Real Madrid player says he will silence his accusers.

“I know when the team needs my help defensively,” he told Sky Sports. “But my role in the club is to win, help the team to win and to score goals – (the defensive side) is part of my job.

“The people who don’t want to see that is because they don’t like me but to be honest I’m 36, I win everything so am I going to be worried about the people who say bad things about me?

“I sleep good at night. I go to my bed with my conscience very good. Keep going with that because I will still close mouths and win things.”

Ronaldo’s return to United after he appeared to be on he brink of joining rivals Manchester City forced Solskjaer to rewrite his attacking blueprint.

The arrival of the five-time Ballon d’Or winner has limited chances for fellow veteran striker Cavani, who impressed in his first season at Old Trafford last year.

Jadon Sancho, who sealed a highly anticipated big-money switch from Borussia Dortmund in July, has barely made an impact, still without an assist or goal.

And attackers Marcus Rashford and Mason Greenwood, 20, were forced to sit out Saturday’s match at Tottenham to accommodate a front two of Ronaldo and Cavani – paired together from the start for the first time.

Solskjaer spoke of the value of experience after the win at Tottenham and he certainly needs his big players to step up for the sake of his own position.

Ronaldo is a serial winner but it remains to be seen whether he can prove the difference in a United team that lacks identity and cohesion.

The Portuguese superstar won the Champions League and three Premier League titles in his first spell at Old Trafford under Alex Ferguson.

He followed up with silverware at Real Madrid including four more Champions League titles and collected two Serie A titles with Juventus.

But even Ronaldo does not guarantee success.

In his three seasons in Turin, Juve never made it beyond the Champions League quarter-finals and Inter Milan also ended Juventus’ nine-year grip on Serie A last season.

Ronaldo is not the tricky winger he was in his earlier years, becoming more of an out-and-out striker, but he still has the ability to conjure up moments of magic.

One thing has not changed in his two decades at the top – it is impossible to ignore him.