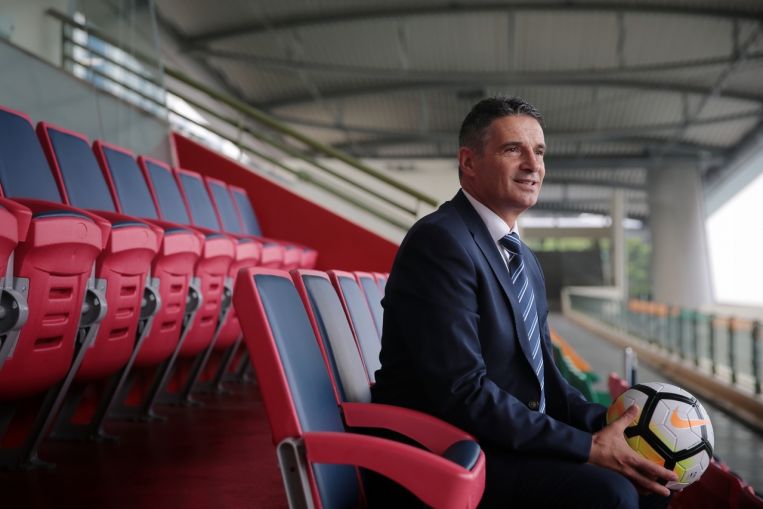 SINGAPORE – The local football fraternity has delivered a withering assessment of former Football Association of Singapore (FAS) technical director Joseph Palatsides, rating his 2 ½ year tenure an average of just 3.35 out of 10 in a poll of 20 officials, coaches and players involved in the game here.

Palatisdes was unveiled as the new head of academy coaching for A-League club Melbourne Victory on Wednesday morning (Nov 10), less than 24 hours after his departure from FAS was announced due to “health and personal reasons” brought about by the pandemic.

His abrupt exit – which came just five months after he signed a two-year extension after an initial two years – and subsequent swift move to Victory raised the ire of some in the local scene.

Out of the 20 individuals The Straits Times contacted – including coaches who have previously served in the FAS set-up, officials at Singapore Premier League (SPL) clubs and former national players – to rate Palatsides’ tenure, only two gave him a score of more than five out of 10. Two individuals declined to rate him.

One of them who declined, Geylang International coach Md Noor Ali, said: “I think it’s not right to judge him because his time here coincided with the Covid-19 pandemic. He may have had the plans but it was not possible to execute them during this period.”

Many ST spoke to said they were surprised by the nature of Palatsides’ exit. In fact, members of the FAS council – who asked not to be named – shared that they were unaware of his impending departure until an Australian website reported the news hours before FAS’ hastily-arranged announcement.

Hougang United assistant coach Firdaus Kassim, who previously coached at clubs in Thailand and worked with the Singapore and Laos national teams, said: “We barely get to see what was in the pipeline that was supposed to be implemented.”

SPL player turned football pundit and commentator Rhysh Roshan Rai added that it was a shock given the technical director role is tied to an association’s long-term plans. Furthermore, the FAS had announced a target to qualify for the 2034 World Cup, called Unleash The Roar.

“As a member of the public and as stakeholders in Unleash The Roar, which we are asked to be a part and believe in… there has to be more transparency in what has happened here,” said Rai.

“How is it he signed a contract, then he is working back home in Australia, and now he’s left us?”

In its media statement, the FAS said that Palatsides’ “efforts in youth development” were recognised by the Asian Football Confederation when Singapore was offered full membership into its Elite Youth Scheme in 2020.

Under his watch, the FAS technical department has also “reviewed and revamped existing curriculum” to educate coaches on best practices in the modern game while keeping in line with FAS’ football philosophy.

This curriculum was rolled out to all levels of coaches here including coach developers, heads of youth development and those from clubs’ Centres of Excellence as well as ActiveSG Football Academy, the FAS added.

But one former SPL coach, who declined to be named, attended a Zoom session where Palatsides and other FAS coaches elaborated on the FAS playing philosophy, and said he was unimpressed by the “basic” plans.

Another coach, who has been involved in youth football coaching for over a decade, said: “Are we any less (off) without him? No. He had no impact at any level.”

Firdaus suggested that the grumbling on the ground is because of the changes that are likely to arise with a new man at the helm, who will take over from interim technical director Philippe Aw.

“Do we restart again which will set us back by a few years or do we carry out what was planned?” asked Firdaus. “A new technical director might have his own ideas of how certain things should be run.”

Noor said that experience is a key requirement for the next technical director, who must also understand the local landscape.

“You need someone tough as a technical director, because he needs to make big changes to turn things around,” said the former national winger. “You cannot have a yes man.”

Rai said the new hire needs to be “firmly committed to the cause” and one who “actually wants to leave a mark”.

Tampines Rovers chairman Desmond Ong agreed, saying that he must be in it for the long haul. “He needs to see through whatever plans he has and ensure those plans are implemented. Rome wasn’t built in a day (and in football) two years doesn’t work.”