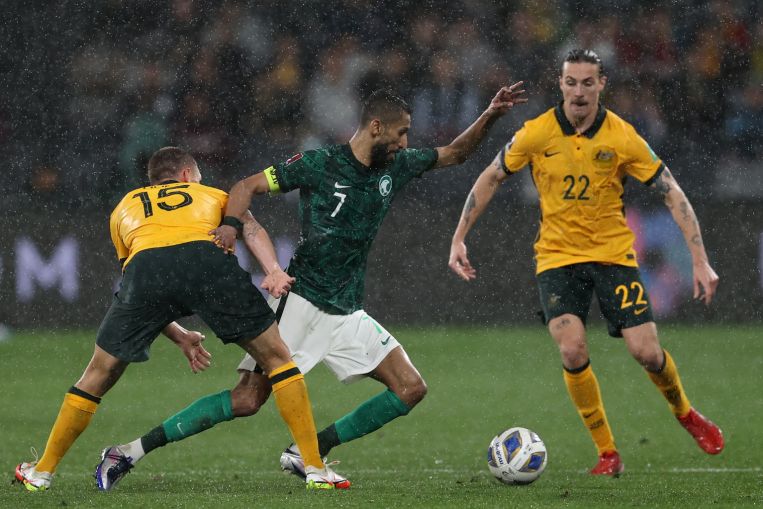 SYDNEY (REUTERS) – Saudi Arabia spoiled Australia’s homecoming party by holding the Socceroos to a 0-0 draw on Thursday (Nov 11) and retaining their three-point advantage over their hosts at the top of Asian World Cup qualifying Group B.

Australia, playing their first match on home soil in more than two years, dominated possession but were unable to make the most of the opportunities they created in front of a crowd of 23,214 at a rain-soaked Western Sydney Stadium.

The Saudis rode their luck at times in the first 75 minutes but had a flurry of chances towards the end of the contest to snatch a victory and extend their winning streak to 10 matches.

“Obviously we wanted the three points to give to the fans, it’s been so long,” said Australia captain Mathew Leckie.

“But we had a great performance tonight and we were just centimetres away from scoring a couple of goals. Just one of those games when the ball didn’t want to go in.”

Restrictions put in place to contain Covid-19 had kept Australia on the road since late 2019 and they had hoped the crowd would help them bounce back from their loss to Japan in their last match, a defeat that ended an 11-game winning streak.

Australia had much the better of a frantic and entertaining first half but their best moves tended to fizzle out with the final pass and they were unable to get a single shot on target.

The Socceroos again came out firing after the break and Leckie wrestled his way past his marker as the hour mark approached only to be denied from close range by Mohammed Al-Yami.

Five minutes later, the third-choice Saudi goalkeeper produced a superb double save to keep out an Awer Mabil free kick and a Martin Boyle strike off the rebound.

The visitors pressed forward in the last 15 minutes, however, and Australia keeper Mat Ryan was forced into action to keep out a Salman Al-Faraj shot and two Salem Al-Dawsari efforts.

“It was a very tough game for the two teams,” said Saudi coach Herve Renard.

“We had three chances, we didn’t score but it’s a very good result for us.”

With the top two from the group earning tickets to Qatar next year, Australia remain on course for a fifth successive appearance at the World Cup finals at the halfway mark of the final round of Asian qualifying.