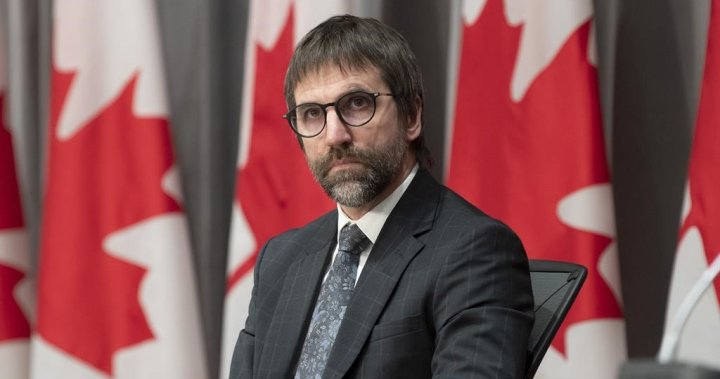 Canada has two “very heavy weeks” ahead as the government gears up for negotiations at the United Nations climate change conference, says Environment Minister Steven Guilbeault.

International officials are set to meet in Scotland starting Sunday as they try to ramp up efforts to curb global warming, with the risk of failure hanging over their heads amid mounting tensions over unmetfunding promises.

Guilbeault saidhe is “cautiously optimistic” about how talks will progress, citing a joint report from Canada and Germany this week that they expect rich countries to step up on a pledge to provide developing nations with US$100 billion in annual aid to tackle global warming — a decade-old commitment that has so far fallen short.

“That being said, it’s not always enough to show up. We can’t always agree,” he said at a virtual news conference Friday.

“These are difficult negotiations. Everyone is not necessarily ready to do more or do more faster,” he added in French.

The UN summit, known as COP26 and delayed one year by COVID-19, is intended to finalize the rule book for the Paris accord, including how carbon emissions trading can work between countries and what each country has to report about progress toward climate goals.

Major hurdles remain. Emissions from the burning of oil, coal and natural gas have continued to rise, except for a small dip due to the pandemic. Over the next decade, countries are slated to emit at least 28 billion more tonnes of carbon pollution each year than the cap required to keep the global temperature rise below 1.5 C, a UN report said this week.

The Trudeau government vowed in April to slash Canada’s greenhouse gas emissions by 40 to 45 per cent below 2005 levels within the next decade, aided by its carbon pricing regime. In the recent election campaign, the Liberals also pledged to reduce the oil and gas sector’s methane emissions by 75 per cent below 2012 levels.

On top of these promises, Guilbeault pointed to Canada’s co-chairing with Germany of the UN task force on how to meet the summit’s goal of massive climate funding for poorer states.

“The international community had very little faith in us, and I think that is clear evidence that the situation has changed,” the freshly appointed environment minister told reporters in French.

The former activist noted he had been to many previous UN climate conferences, where he said Canada did not play a prominent role.

Conservative MP Michelle Rempel Garner said Friday the country needs policies that help spur economic growth and lower greenhouse gas emissions in a way that “leaves no one behind.”

“Justin Trudeau could have appointed an environment minister that understands this point. Instead, Justin Trudeau appointed an ideological anti-energy activist,” the Calgary MP said in a statement, claiming that Guilbeault has fought “to shut down entire industries.”

NDP Leader Jagmeet Singh called on the Liberal government to axe fossil fuel subsidies and raise its emissions reduction target for a second time this year to 50 per cent.

The world’s wealthiest countries failed to meet a 2009 goal to provide the developing world with US$100 billion in climate aid by 2020 — and won’t get there for another two years, a new analysis showed Monday.

The news threatens to cast a pall over the climate talks in Glasgow, which run this weekend through Nov. 12.

The climate finance plan outlined Monday stemmed from a collaboration between former environment minister Jonathan Wilkinson and Germany’s state secretary for the environment, Jochen Flasbarth. The two were asked in July by COP26 president designate Alok Sharma to figure out countries’ precise financing pledges through to 2025.

The duo spent the past three months wrangling new commitments out of various governments, with Sweden and New Zealand offering fresh pledges and Italy among the most notable holdouts. Canada has promised to double its climate aid to more than $1 billion a year for the next five years.

Guilbeault, a former Greenpeace activist, had expressed opposition to pipelines in years leading up to his election as a Montreal MP in 2019, when his announcement as a candidate came just three days after the Trudeau government re-approved the Trans Mountain expansion.

“When I came into politics in 2019 we had already bought a pipeline,” said Guilbeault, referring to the government’s decision the previous year to purchase Trans Mountain from Kinder Morgan.

“I’ve said since then that I wasn’t going to rewrite history. I think what’s important is to look at what we’re doing to reduce emissions in Canada,” he added.

Guilbeault also uttered indirect support for the Liberal stance on Line 5, a cross-border pipeline that Michigan aims to shut down.

“My government has announced in the past that we support the continued operation of Line 5,” Guilbeault said, when asked if he backed the twin line that runs along the lake bed beneath the ecologically sensitive Straits of Mackinac, which connect Lake Michigan and Lake Huron.

Pushed on the question, he continued: “Being part of the government, I support my government’s position.”

One glaring in-person absence from the UN summit will be China’s Xi Jinping, who has not left the country for nearly two years as part of its pandemic measures.

“We recognize in Canada that we must do more, and all the large emitters around the globe, including China, which is the largest one, must do more to fight climate change. So it would have been desirable for the Chinese president to be there,” Guilbeault said.

China is the world’s biggest emitter of carbon dioxide, followed by the United States and the countries that comprise the European Union.

Canada, along with the U.S. and Australia, is among the top three biggest carbon-dioxide emitters per capita in the world, according to a recent UN scientific paper.