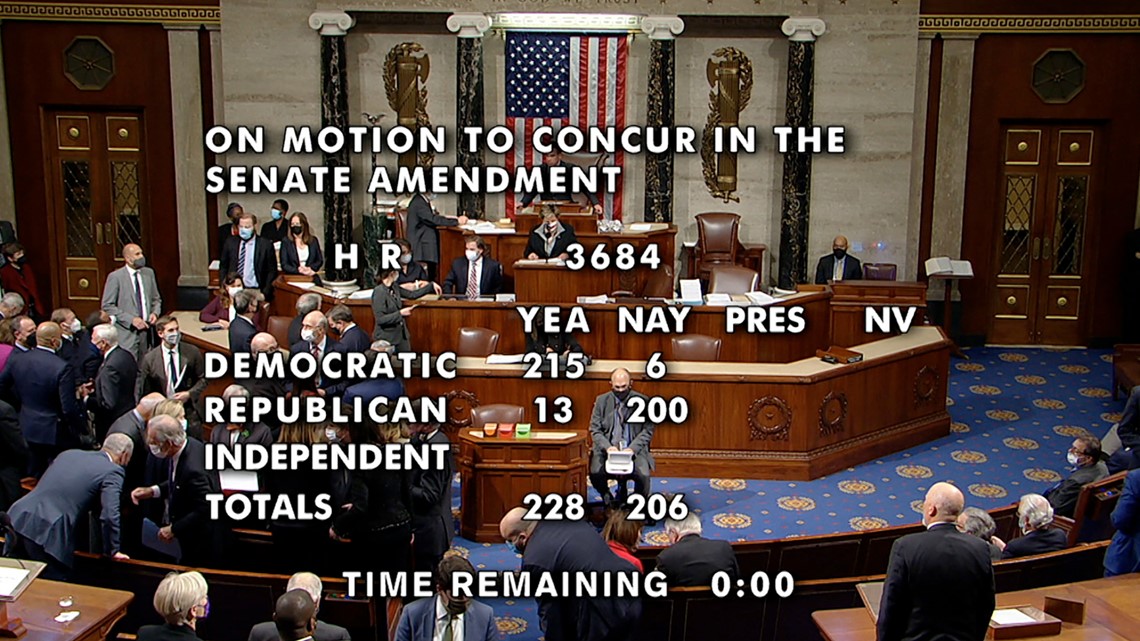 Once it is signed by Biden, the new law will reach virtually every corner of the country — called an historic investment by the president.

The House has passed a $1 trillion bipartisan plan to rebuild roads and bridges, modernize public works systems and boost broadband internet, among other major improvements to the nation’s infrastructure. The legislation now goes to President Joe Biden for his signature.

Once it is signed by Biden, the new law will reach virtually every corner of the country — a historic investment that the president has compared with the building of the transcontinental railroad and Interstate Highway System. The White House is projecting that the investments will add, on average, about 2 million jobs per year over the coming decade.

The bill cleared the House late Friday on a 228-206 vote, ending weeks of intraparty negotiations in which liberal Democrats insisted the legislation be tied to a larger, $1.75 trillion social spending bill — an effort to pressure more moderate Democrats to support both.

The Senate passed the legislation on a 69-30 vote in August after rare bipartisan negotiations, and the House kept that compromise intact. Thirteen House Republicans voted for the bill, giving Democrats more than enough votes to overcome a handful of defections from progressives.

Here’s a breakdown of the bill that Biden is expected to soon sign into law:

The bill would provide $110 billion to repair the nation’s aging highways, bridges and roads. According to the White House, 173,000 total miles of America’s highways and major roads and 45,000 bridges are in poor condition. And the almost $40 billion for bridges is the single largest dedicated bridge investment since the construction of the interstate highway system, according to President Joe Biden’s administration.

The $39 billion for public transit in the legislation would expand transportation systems, improve accessibility for people with disabilities and provide dollars to state and local governments to buy zero-emission and low-emission buses. The Department of Transportation estimates that the current repair backlog is more than 24,000 buses, 5,000 rail cars, 200 stations and thousands of miles of track and power systems.

To reduce Amtrak’s maintenance backlog, which has worsened since Superstorm Sandy nine years ago, the bill would provide $66 billion to improve the rail service’s 457-mile-long Northeast Corridor as well as other routes. It’s less than the $80 billion Biden — who famously rode Amtrak from Delaware to D.C. during his time in the Senate — originally asked for, but it would be the largest federal investment in passenger rail service since Amtrak was founded 50 years ago.

The legislation’s $65 billion for broadband access would aim to improve internet services for rural areas, low-income families and tribal communities. Most of the money would be made available through grants to states.

To protect against the widespread power outages that have become more frequent in recent years, the bill would spend $65 billion to improve the reliability and resiliency of the nation’s power grid. It would also boost carbon capture technologies and more environmentally-friendly electricity sources like clean hydrogen.

The bill would spend $25 billion to improve runways, gates and taxiways at airports and to improve terminals. It would also improve aging infrastructure at air traffic control towers.

To improve the safety of the nation’s drinking water, the legislation would spend $55 billion on water and wastewater infrastructure. The bill would include $15 billion to replace lead pipes and $10 billion to address water contamination from polyfluoroalkyl substances, or PFAS — chemicals that were used in the production of Teflon and have also been used in firefighting foam, water-repellent clothing and many other items.

The five-year spending package would be paid for by tapping $210 billion in unspent COVID-19 relief aid and $53 billion in unemployment insurance aid some states have halted, along with an array of other smaller pots of money, like petroleum reserve sales and spectrum auctions for 5G services.