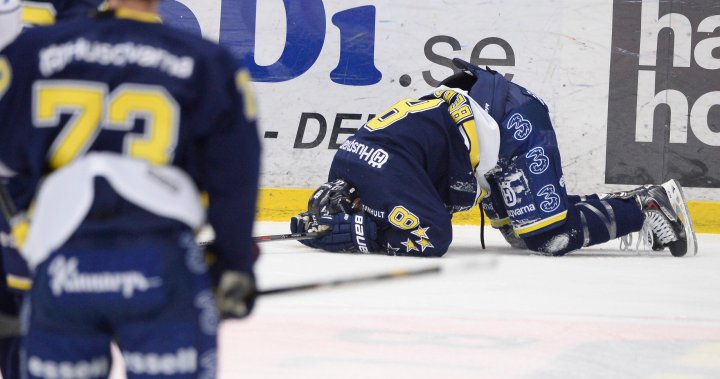 When hockey player Kyle Beach came forward to the Chicago Blackhawks with allegations that he had been sexually assaulted, the accusation reportedly went “all the way up the chain of command.”

Then, according to Beach, nothing was done about it.

Beach said he watched on as the man whom he accused of assault, former Blackhawks video coach Brad Aldrich, subsequently celebrated the team’s Stanley Cup win. Aldrich lifted the cup. He was photographed celebrating alongside the team.

“To see him paraded around, lifting the cup at the parade … it made me feel like nothing,” Beach told TSN’s SportsCentre on Wednesday.

Beach’s story has become yet another in a series of incidents that highlight hockey’s mishandling of sexual assaults, according to experts. By emphasizing winning over everything — and brushing serious problems under the rug to achieve those victories — academics who have studied the issue say hockey has a systemic issue that needs to be solved.

“Kyle Beach’s story tells everyone that hockey culture (is) mainly toxic and broken. At every level adults — and his teammates — failed him repeatedly,” wrote Evan F. Moore, a co-author of Game Misconduct: Hockey’s Toxic Culture and How to Fix It, in an email to Global News.

“The Blackhawks organization prioritized winning over the welfare of the players.”

The Blackhawks hired Jenner & Block to conduct what they called an independent review in response to two lawsuits filed against the franchise, including one filed by Beach. Beach’s allegations have not been proven in court The second lawsuit relates to Aldrich’s assault of a 16-year-old student in Michigan — for which he was sentenced to nine months in prison.

According to the resulting report, the assault is believed to have occurred on May 8 or 9, 2010. At the time, Beach was a 20-year-old prospect who played for the Blackhawks’ minor league affiliate team.

The Blackhawks, meanwhile, were nearing the end of a red hot playoff run.

Just after the Blackhawks secured their place in the Stanley Cup Finals on May 23, the report says five members of senior management met “to discuss what had been learned about Aldrich and (Beach).”

During the meeting, then-head coach Joel Quenneville and then-president of the Blackhawks John McDonough “made comments about the challenge of getting to the Stanley Cup Finals and a desire to focus on the team and the playoffs,” the report said.

Years later, one of the managers added that McDonough “did not want any negative publicity during the Stanley Cup Finals,” the investigation found.

Read more:
Sexual abuse survivor, ex-player speaks about Blackhawks scandal: ‘No one thought about the victim’

Blackhawks general manager Stan Bowman stepped down on Tuesday, following the release of the independent report, saying he did not want to be a distraction for the team. McDonough was released by the team in April. But Quenneville is still employed, now as the coach of the Florida Panthers.

“It’s a tragic story, but one of far too many that have have shown us how many people actually knew about the abuse and either failed to act on their responsibility or, in cases of people in positions of authority, failed to act on their duty to care for young people,” said Gretchen Kerr, a professor at the University of Toronto who researches athlete maltreatment.

“This is why a systemic approach to dealing with this problem is so important. If we don’t deal with the enablers and the bystanders, we were not going to make much progress.”

One key shift the hockey world needs to make in order to start addressing the issue is to focus less on winning, and more on players’ well-being, according to Kerr.

“This case highlighted the choice, the very deliberate choice, between a focus on winning (and) the neglect of an athlete’s health and well-being — and these things should not be viewed as mutually exclusive,” Kerr said.

“In fact, the best way to (get) to a winning performance …  is through optimal health and well-being of athletes, not in spite of it.”

In a tweeted statement, the Chicago Blackhawks defended their organization, stating that “no playoff game or championship is more important than protecting our players.”

A statement from the Chicago Blackhawks pic.twitter.com/x1XbMXDiyA

But Beach’s story is a familiar one for Sheldon Kennedy, a former NHL player. Kennedy came forward in 1996 and revealed he had suffered years of abuse at the hands of his childhood coach, Graham James.

“The biggest disappointment here is that we spend so much time trying to tell people to come forward and tell your story and talk, talk, talk,” Kennedy told

“Meanwhile, when it falls on deaf ears, that’s almost more impactful for the victims than the actual incident itself.”

Kennedy said the issue goes beyond any individual coach or player.

“This is not just about having a bad video coach on your team that is going to abuse players. This is about running an organization that has drafted 18-year-old kids,” he said.

“If they come to you with something that’s going on in their life, do you know how to handle it or are you just going to shuffle it off, or trade them, or get rid of them? Or are you actually going to deal with the person?”

That, Kennedy said, is the crux of the issue.

“How do we get to that point where the person is the most important thing? More important than a playoff win.”

Given their role in training the next generation of hockey players, the Canadian Junior Hockey League (CJHL) actively works to ensure players know what resources are available to them, should they ever find themselves in a situation like Kennedy or Beach, according to CJHL President Brent Ladds.

“What we try to do is make sure we have as much education out there so that not only the adults are aware of the situation, but the players are as well,” Ladds said.

1:50
A former Winnipeg man who was abused by minor hockey coach Graham James, is sharing his story.

A former Winnipeg man who was abused by minor hockey coach Graham James, is sharing his story – Mar 16, 2018

While he said the CJHL aren’t “experts” when it comes to issues like sexual abuse and mental health, he said the leagues has the ability “to direct those players to the proper channels so that they can express themselves.”

The upcoming generation of hockey players is also quicker to call out things they find problematic or offensive, Ladds added, which could signal a growing appetite for change in hockey’s culture.

“There’s a greater sensitivity towards those issues today than there ever has been in the past, and I think it has a lot to do with what they’re exposed to through the media,” he said.

“In the dressing room, we’re more sensitive now and they probably react quicker.”

Read more:
Winnipeg Jets GM says he had no knowledge of allegations against former Blackhawks coach

Despite these efforts, there’s a lot of work to be done to fix the “systemic” problem, according to Kerr.

“One could say they they should have learned from the Graham James,” she said, referring to the coach who Kennedy spoke up about in 1996.

And yet, she added, “here we are again.”

“Historically there’s been this cycle of a case becomes public, there’s lots of attention on it, and then eventually attention wanes until a new case emerges,” Kerr said.

“So let’s hope that something’s done differently this time to to make a significant change in the system.”

Speaking during an interview on CBS on Thursday morning, Beach expressed the same concern — and faint hope.

“Whether is be with sexual assault, or sexual abuse, or abuse in general, or drugs, or anything else,” he said, “I don’t know when it’s going to be enough for the NHL to step in and say enough is enough and take the necessary steps and take the necessary action to make a difference and protect the players that make the NHL what it is.”

— with files from The Canadian Press