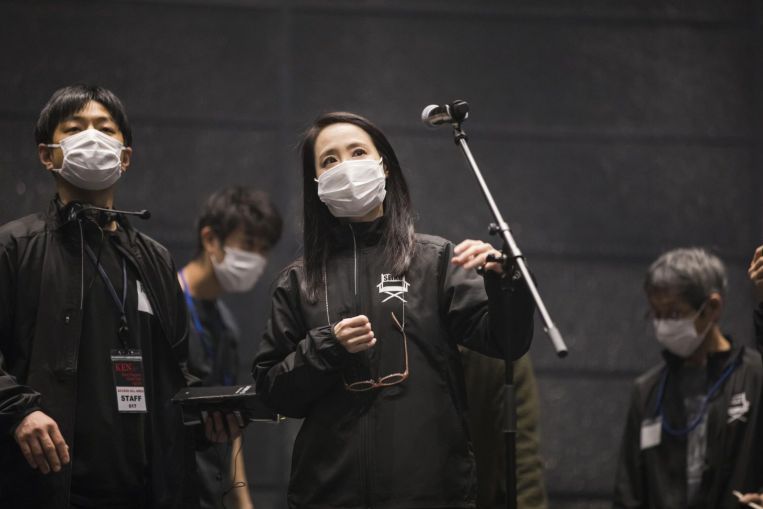 SINGAPORE – For four decades, Japanese singer and actress Seiko Matsuda has built a following across Asia through a non-stop output of albums, television shows and films. She will now make her debut as a director in a TV series built on a topic few would associate her with: horror.

The show-business veteran has helmed an episode of Folklore, the anthology series focused on Asian horror. Season 2 launches on HBO Go and HBO (StarHub TV Channel 601 and Singtel TV Channel 420)on Nov 14, with Matsuda’s episode, The Day The Wind Blew, premiering on Nov 21.

Based on a story loosely inspired by her own spooky experiences in the entertainment industry, the plot revolves around Mika (played by Japanese actress Haori Takahashi), a schoolgirl who idolises pop star Ken (Japan-based Burmese singer and actor Win Morisaki).

Her dreams come true when they become friends away from the concert stage, but a chilling truth gradually reveals itself.

Matsuda, 59, tells journalists at an online conference that the offer for her to direct came out of the blue.

“It came as a surprise. I never expected it,” she says, speaking in English, with occasional help from an interpreter.

She had come to know Folklore showrunner, Singaporean film-maker Eric Khoo, when she acted in his film, the drama Ramen Teh (2018).

They were casually swopping scary stories over dinner when she related a true tale about a paranormal encounter told to her by a former assistant.

“Eric said, ‘I love your story.’ One year later, he called and asked me to lunch. Out of nowhere, he asked if I was interested in directing a horror story and I said, ‘What?'” she recalls.

He said her story showed promise. He persuaded her to put its structure on paper and to direct the episode. Encouraged by his support, she overcame her initial shock and said yes.

“But my story is not just about horror. It’s a scary story, but I wanted to express love. It’s who I am,” she says.

She hopes viewers can appreciate its Japanese tone through the way affection is shown between romantic partners and between parent and child.

“The Japanese way to show love and care is not to say it out loud,” she says. It can be expressed in silence, but within that silence, deep emotional currents are running, she adds.

The episode is driven by songs penned by Matsuda. After screenwriters completed their work on her draft, she created the music – a romantic ballad here, an upbeat pop number there – to fit the scene.

She describes her first directorial outing as “wonderful”.

“I’ve learnt a lot from everyone, especially Eric. I’d be very interested to do this again if I had the chance.”

Folklore’s second season will comprise six episodes, each set in a different part of Asia and directed by a talent from that locale.

In addition to Matsuda, the directors are Shih-Han Liao from Taiwan, Sittisiri Mongkolsiri from Thailand, Erik Matti from the Philippines, Billy Christian from Indonesia and Nicole Midori Woodford from Singapore.

At the same online conference, Khoo, 56, spoke about how season 2 is different.

While the first season dealt more with social and contemporary issues, the upcoming one will contain more scares, he says.”There will be things like witchcraft, rituals, scary demonic possessions. We have an exciting mix.”

Folklore 2 premieres on Nov 14 at 10pm on HBO Go and HBO (StarHub TV Channel 601 and Singtel TV Channel 420), with a new episode every Sunday at the same time.