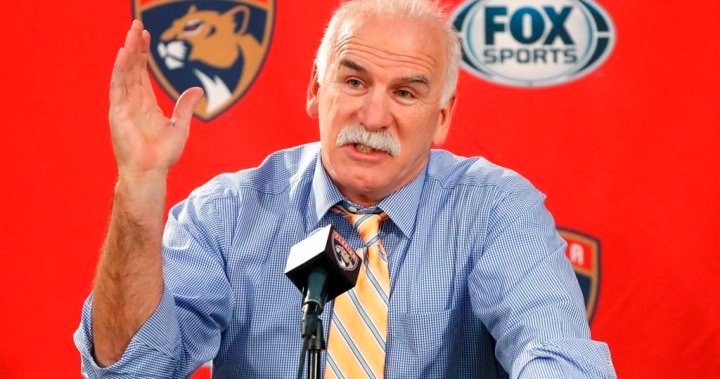 Former Chicago Blackhawks coach Joel Quenneville has resigned as the coach of the Florida Panthers following the release of an investigation into a 2010 sexual assault allegation by a former Blackhawks player.

In a statement from National Hockey League (NHL) Public Relations Thursday, Commissioner Gary Bettman said that the NHL “agrees” with Quenneville’s decision to step down as head coach.

“I admire Kyle Beach for his courage in coming forward, am appalled that he was so poorly supported upon making his initial claim and in the 11 years since, and am sorry for all he has endured.”

Statement from NHL Commissioner Gary Bettman on the resignation of Joel Quenneville. pic.twitter.com/1KjdI2SKOL

Quenneville on Thursday met with Bettman about his role in what transpired in Chicago during the 2010 Stanley Cup playoffs, where Beach claimed he was sexually assaulted by Aldrich.

Beach, who is from North Vancouver, B.C., was selected 11th overall in the 2008 draft by Chicago.

He never played in the NHL but was a so-called “Black Ace” for the team in 2010, practicing with them on a regular basis in case the team needed a replacement player if another was injured.

At the time, Quenneville was the head coach of the team, which also went on to win the Stanley Cup that year.

Beach’s allegations state that top Blackhawks officials, including Quenneville, did not prioritize his claims because a chance to win the championship was more crucial than his personal safety.

Quenneville stated in July that he was unaware of the allegations until this summer. He maintained his stance on Wednesday, despite an independent report into the incident claiming that he was previously in meetings about it at the time.

Stan Bowman, who was general manager of the Blackhawks at the time of the alleged assault, resigned from his position on Tuesday over the report.

Read more:
Sexual abuse survivor, ex-player speaks about Blackhawks scandal: ‘No one thought about the victim’

The independent report by Jenner & Block was prepared in response to two lawsuits filed against the Blackhawks — the first being Beach’s allegations against Aldrich and the other filed by a former student who Aldrich was convicted of assaulting in Michigan.

Quenneville’s success in Chicago — three Stanley Cups for the Blackhawks — was the reason why Florida brought him in to coach the Panthers a little over two seasons ago.

In the history of NHL, Quenneville is the coach with the second-most wins. His 968 victories closely follows the 1,244 gathered by Scotty Bowman, the father of now-former general manager Bowman.

Quenneville turned around a long-struggling franchise in the Panthers — one that had cycled through 15 coaches in 25 seasons, including five in a six-season span before Quenneville was hired.

“As an organization, we commend Kyle Beach for his courage in coming forward this evening to bring to light the pain he endured during his time in Chicago,” read a statement.

“The events described are serious and severe, and we are working closely with the National Hockey League to assist in this ongoing process.”

— with files from the Associated Press and the Canadian Press