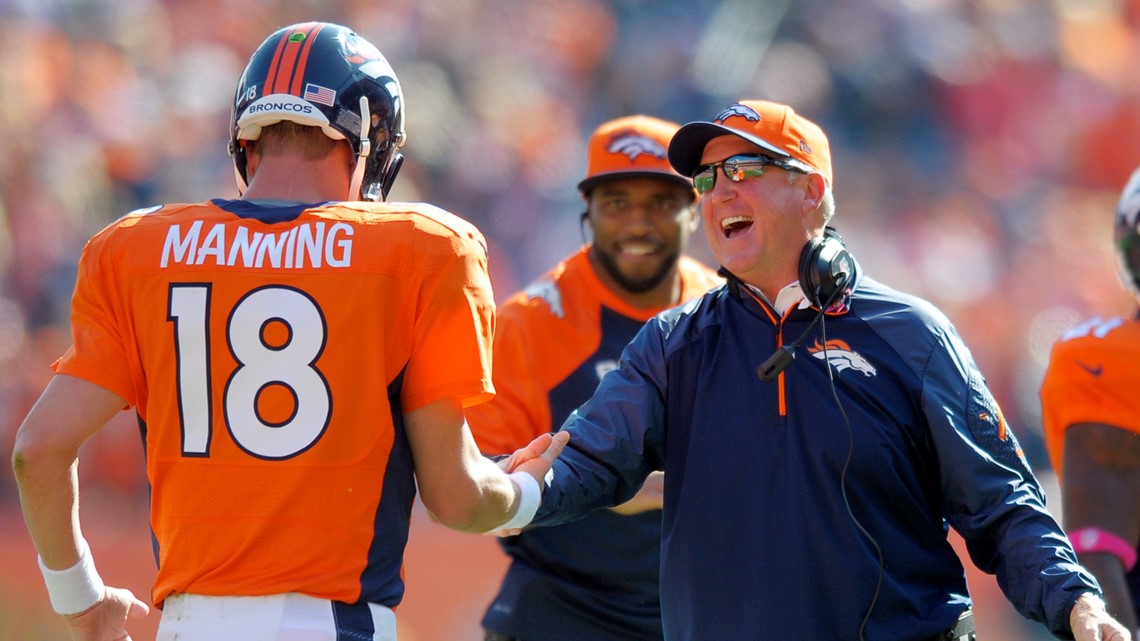 Former Broncos head coach and quarterback had a 38-10 record together from 2012-’14. Fox: “I feel very honored and excited to be there for him.”

DENVER — Peyton Manning thinks of everything and details of his Broncos’ Ring of Fame induction ceremony were not going to escape him.

It got around to who he should select to present him with his ROF ring during the halftime ceremony of the Broncos-Washington game Sunday at Empower Field at Mile High.

After conferring with Patrick Smyth, the Broncos’ public relations chief, Manning decided his former coach John Fox would be the perfect choice.

“I’m excited. I’m excited for him,”’ Fox said this week as his wife Robin was driving him on an errand near their South Florida home.

“I just talked with (Mike) Shanahan two weeks ago. They did the same thing for him. He was disappointed they lost to the Raiders. You know how he feels about the Raiders. But it was a nice gesture on Peyton’s part. I feel very honored and excited to be there for him.”

Fox doesn’t get enough credit for helping to lure Manning to Denver and the Broncos in 2012. John Elway is most often mentioned as the reason the free-agent Manning chose the Broncos over San Francisco, Tennessee, Arizona and Seattle, among others. And Elway’s no-pressure recruiting pitch was a factor in Manning choosing the Broncos.

The tradition built by owner Pat Bowlen was a reason. The roster’s young talent with Ryan Clady at left tackle and Demaryius Thomas and Eric Decker at receiver was a reason. His good buddies Todd Helton from Tennessee and Brandon Stokley from the Indianapolis Colts were reasons. And Colorado itself was a reason why Manning chose the Broncos and decided to make it home for his wife Ashley and children Marshall and Mosley since he retired as a player following the 2015 season.

But Manning had also consulted with several people behind the scenes who thought Fox’s experience, personality and demeanor would be a good fit.

“And then I knew Peyton,’’ Fox said. “He was good buddy’s with a guy who runs our (golf) club in Charlotte. I met him at a couple Pro Bowls, we hung out by the pool. We played them in Indy and beat him. Everybody looks back at it now like it was automatic when we got him and paid him a lot. But he didn’t start off like gangbusters. He had to work through some (stuff). I think we were, I don’t know, 1-3? What were we?’’

The Fox-Manning Broncos of 2012 started 2-3 and were trailing 24-0 at halftime in game 6 to the San Diego Chargers. They then rallied to beat Philip Rivers and the Chargers at old Qualcomm Stadium, 35-24, the first of 11 consecutive wins to finish the regular season. Then came the second-round playoff game against Baltimore and the Flacco Fling.

“That was really our best team,’’ Fox said.

That 13-3 team was followed by another 13-3 season in 2013, when Manning set all the single-season passing records that still stand – 55 touchdown passes, 5,477 passing yards, plus 606 points scored. Can you imagine a Broncos’ offense scoring 38 points a game? That season produced an iconic image from a Wednesday practice in December, when Manning was dealing with an ankle issue.

“What I used to tell people in Denver that epitomized him – remember that picture when he’s in the cold tub?’’ Fox said. “With his helmet on watching his iPad? I mean to me that epitomized him. We were short-week practicing and he didn’t practice on Wednesday but the kind of guy he was, he’s in there with the microphone in his helmet. And I told him he must have graduated from Tennessee because you understand that’s electrical and you’re in the water? That’s not a real smart move.

“But he ended up sitting there watching practice live and listening to the play calls while he was freshening up his body,” said Fox.

After the shocking playoff loss to the Ravens in 2012 and Super Bowl debacle in New Jersey, where the Broncos got crushed by Seattle’s Legion of Boom, the tension between Elway the general manager and Fox the head coach became untenable. Fox resigned after the Broncos’ 12-4 regular season was marred by a playoff loss to Indianapolis to finish 2014 as the wheels were already in motion for him to become head coach of the Chicago Bears.

With time, and a greater perspective on how successful they both were during the Manning era, Elway and Fox have made amends.

In fact, Fox’s 46-18 record and .719 winning percentage makes him the winningest coach in Broncos history.

“Me and Smyth talk about it: There wasn’t a Sunday where we didn’t trot out there and expect to win. And John said you miss those days when you go through times like this.”

Fox seemed like a perfect fit for the Bears and their Monsters of Midway tradition, and while he did build a strong defense during his time there, the experience didn’t turn out as hoped. Manning’s legs and arm had one more trying season in Denver. Gary Kubiak’s boot passing game wasn’t a good fit for Manning, but he still managed to summon his aching body off the bench to rally the Broncos to victory in the 2015 season finale, then guided the Broncos to playoff wins against the Steelers and Patriots.

Manning didn’t play his best game in Super Bowl 50 but the Broncos wouldn’t have won it without him.

“He told me one time, it was third and 9 and they came in with ‘All Go’ and I audibled to a run,’’ Fox said of Manning.

Indeed, the Broncos were leading Carolina, 17-10 with 5:42 remaining and had the ball on their own 26 yard line when on third-and-9, Manning basically checked to a punt. That’s what came after his handoff to C.J. Anderson only netted 2 yards.

Britton Colquitt nailed a 48-yard punt with no return and a couple plays later Von Miller came up with his second strip sack of Cam Newton, who stood by and watched T.J. Ward pick up his fumble and return it to the 4 yard line. Anderson wound up scoring and then Manning would make one final pass, a 2-point conversion to Bennie Fowler and the Broncos won, 24-10.

Manning and Fox are now both retired although they’ve taking different approaches to it. Fox and his wife Robin have settled in Marco Island where he can’t enough of fishing off his luxury boat. Manning has remained in the public eye through commercials and his Monday Night Football commentating gig with his brother Eli.

This is also a year when his playing career has been honored through his induction into the Pro Football Hall of Fame in Canton and now his formal enshrinement into the Broncos’ Ring of Fame will come Sunday with a pregame unveiling of his pillar and halftime ceremony of the Broncos-Washington game.

“I’m hoping they can find a way to win this weekend, really for Peyton,’’ Fox said.