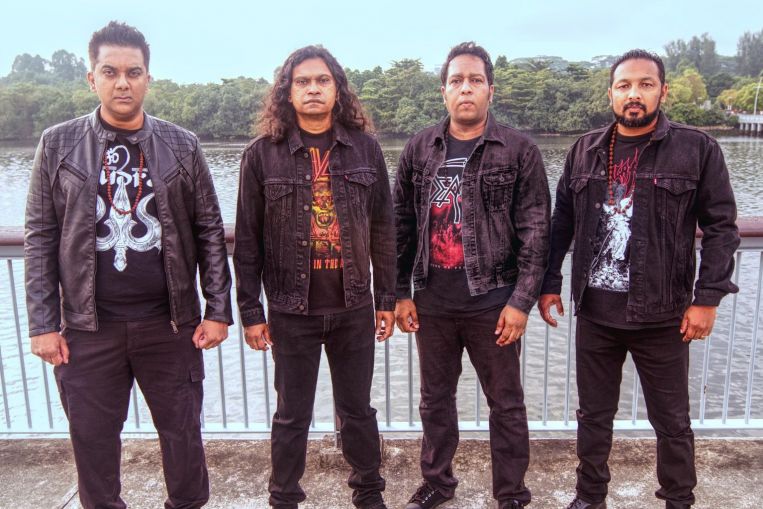 SINGAPORE – Rudra, stalwarts of the Singapore metal music scene, have long incorporated elements of classical Indian music and philosophy into their songs.

For the first time in their 29 years as a band, they will finally get a chance to stage a full concert together with three classical Indian musicians: singer Aditi Gopinathan, flute player Raghavendran Rajasekaran and mridangam percussion player Viknash Balakirshnan.

The concert, part of the Esplanade’s Indian arts festival Kalaa Utsavam, will take place at the Esplanade Theatre on Nov 27.

While the band have collaborated with Raghavendran several times, the show will be the first time they are working with Aditi and Viknash.

Rudra singer, bassist and co-founder Kathir, 48, says working with the classical musicians for the concert was a “mind-blowing” experience.

“It’s actually an exercise in humility for us because, in the band, we are all self-taught musicians and we are meeting people who have gone through proper, structural learning of their instruments.

“We are fundamentally musicians, but we come from two different worlds. We speak different languages, but the beats, melodies, keys and all of that are still the same.”

The set list in the 1½-hour concert will include songs from the band’s self-titled debut album in 1998 all the way to their most recent and 10th album, Invoking The Gods (2019).

A lot of pre-production work had to be done before the classical musicians stepped into the studio to rehearse with the band.

The songs had to be rearranged so that Raghavendran, Aditi and Viknash’s parts could be incorporated without losing their essence. The band created spreadsheets with detailed breakdowns of each song and these served as musical scores.

Says Kathir: “We don’t want to lose our integrity as a metal band. The songs will still be heavy so the integration had to be seamless. But, at the same time, we are also fusing the classical elements, so we feel the show is going to reach out to a very broad range of audiences.”

Their last show was also at the Esplanade, a gig that was part of the 2019 edition of music festival Baybeats.

Formed in 1992, Rudra are known in the global metal scene for popularising a sub-genre dubbed vedic metal, a style of hard-hitting music with lyrics that delve into ancient Indian philosophy.

The band have been constantly active for close to three decades. They have toured in places such as North America and South Asia, and their last overseas concert was in Hong Kong in 2019.

Kathir, who started the band with Shiva while both were still students at Ngee Ann Polytechnic, says they have always had a clear vision and strong artistic intent from day one – to always be inventive with their original songs.

“For us, it is exciting to be doing something innovative and interesting. It gives the band purpose and meaning,” says Kathir.

Shiva adds that he is still as passionate about music as he was when he started the band. “Music is something that still makes us feel young. Every week, we look forward to hitting the studio, coming up with new riffs, new beats. It’s an avenue where I can let off steam.”

Without any live shows in the past two years because of the pandemic, the band have been working on songs for their next album, which they expect to release in 2022. The lyrics will focus on female characters in ancient Sanskrit literature.

They are also thinking of getting Raghavendran, Aditi and Viknash to collaborate on the new songs.

Says Kathir: “Working with them has inspired us to fuse Indian classical music a little more deeply into the songs we are writing.”