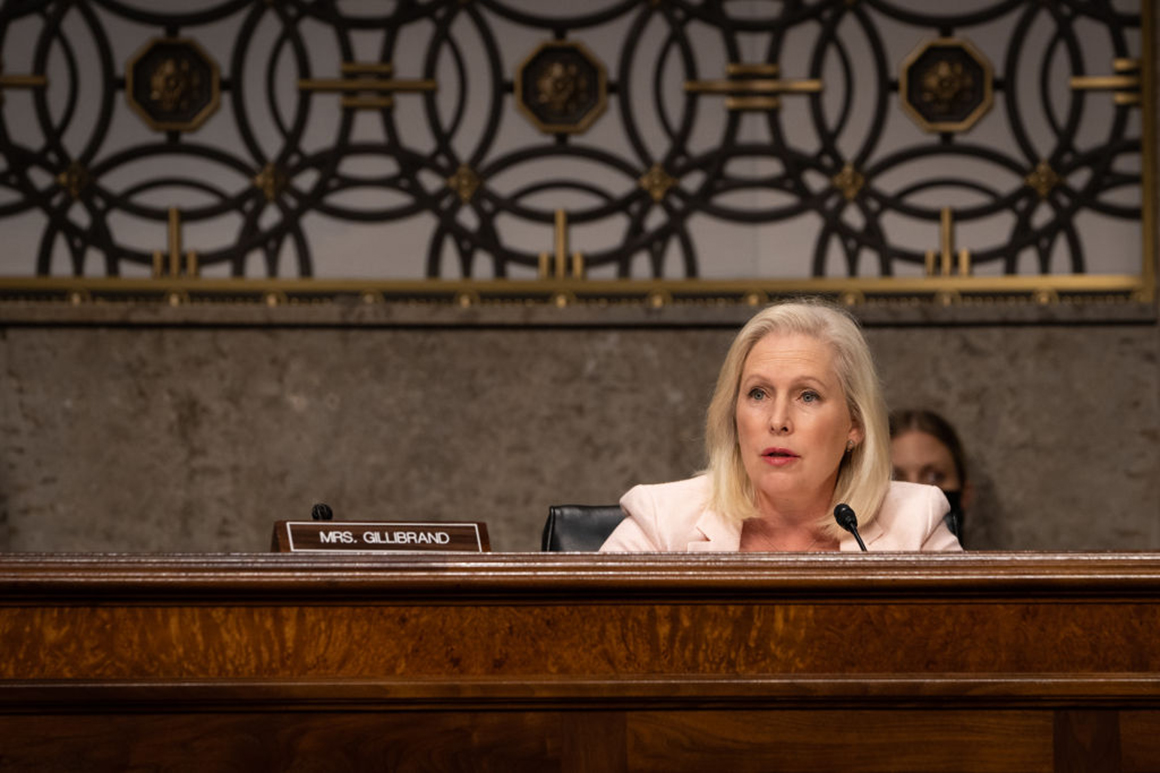 Some progressives in both the House and Senate aren’t there yet. But Gillibrand is as progressive as they come and, if Democrats ultimately pass anything, she’ll have proven a leading indicator of where the rest of the party’s liberal wing falls. Many senators believe Manchin and Sinema have stretched as far as they can go, leaving their party to decide whether a shaky consensus that elevates some progressive priorities is better than walking away with nothing.

“Some people look at the donut and just see the hole. I see the donut. This donut is substantial,” Durbin said.

For now there isn’t as much pressure on Senate progressives to make up their mind, as the House faces a potentially do-or-die vote on a bipartisan infrastructure bill that most on the left believe is firmly yoked to the social spending plan. Biden released the social spending compromise forged with Sinema and Manchin on Thursday morning, and the first round of intra-party pressure is aimed at House liberals rather than the upper chamber.

And notably, leading Senate progressives aren’t sending their House allies a direct signal to tank the infrastructure bill. Sanders, for one, doesn’t believe it should come up for a vote without more ironclad commitments from all 50 Senate Democrats. Yet even as he seeks to edit the agreement, he praised it Thursday as “probably the most consequential bill since the 1960s.”
“Two months ago, we had two senators that were in a fundamentally different place than the other 48. And I think we’re on the verge of being able to come together,” said Sen. Chris Murphy (D-Conn.), who has been speaking to Sinema frequently. “The focus should be on what’s in, not what’s out.”

Senate Democrats huddled on a private Zoom Thursday afternoon with White House officials to discuss the framework. During the call, Sanders brought up statements from Rep. Frank Pallone (D-N.J.) that the social spending bill can’t pass the House unless it includes stronger prescription drug reform, according to people familiar with the call.

“There’s a real concern about where immigration is headed,” said Duckworth. “There’s a real strong desire within the caucus to move something — anything.”

Some Democratic senators also brought up the status of the bipartisan infrastructure bill and whether the legislation would get out of the House, according to one of them. But most left the call projecting optimism.

“The tone of the call was like: ‘Amen, we finally got there,’ even though there’s still some issues to work out,” said Sen. Tim Kaine (D-Va.). He added that “I believe this will unify the 50” Senate Democrats.

Though some Democrats are still fighting over including what’s been excluded, many are pleased with its big investments in childcare, early education, housing, home care, climate change and the child tax credit. Thursday’s framework comes after months of negotiation between the Democratic party’s progressive and moderate factions.

Importantly, while Senate Democrats largely spoke positively of the White House’s outline, it was unclear how much of it was actually set in stone.

“Is this framework the final word, or is it the basis for future negotiations?” asked Smith. “That’s a question we have to answer.”

House Democrats put out initial legislative text on Thursday afternoon, fulfilling a requirement for progressives ahead of what could be a brutal fight for their leadership to pass the $550 billion bipartisan infrastructure package. But that text is subject to change. Delivering on the bipartisan package imminently is a top priority for Democratic leadership ahead of Biden’s trip to Europe and next week’s gubernatorial election in Virginia.

The $1.75 trillion topline number is about a third of what progressives had hoped for in the social spending bill. But at this point, the party is getting more realistic about its slim majority in both the House and Senate.

“The way I’m looking at it: For all these programmatic areas that have [received] zero — nothing — we’re moving ahead,” said Sen. Mazie Hirono (D-Hawaii), another progressive. “That’s what I’m focused on.”

“Obviously I’ve been working with Sen. Manchin for a while on this. And it’s something I’ve fought for, for the last 10 years,” Gillibrand said, noting that the West Virginian “did say to me that he’d like to work with me on writing a paid leave bill. He just didn’t want to do this on this particular bill.”