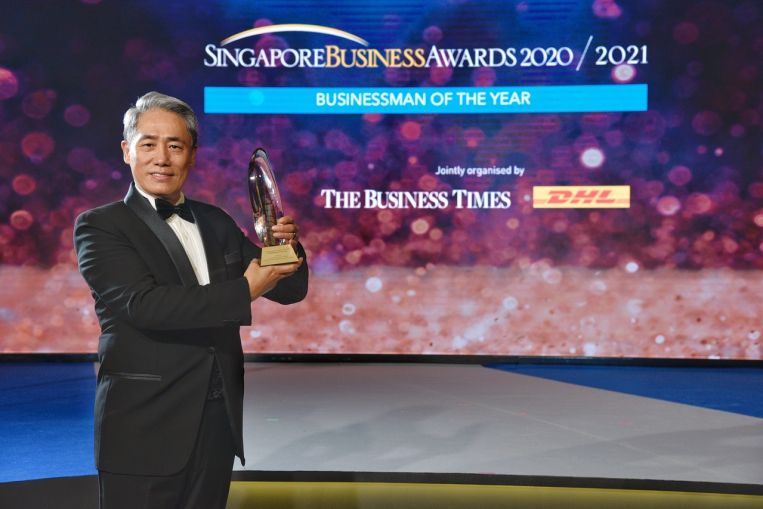 The annual awards, jointly organised by Singapore Press Holdings publication The Business Times (BT) and express and logistics company DHL Express, celebrates corporate leaders who have made their mark in their industries.

Minister for Trade and Industry Gan Kim Yong was the guest-of-honour and presented the awards at The Ritz Carlton, Millenia Singapore.

Mr Shi was recognised for his success in propelling Nanofilm’s technology from lab to marketplace. The academic-turned-entrepreneur had spearheaded the research behind Nanofilm’s filtered cathodic vacuum arc coating technology when he was a lecturer at Nanyang Technological University.

Under his leadership, Nanofilm grew into a multinational technology and manufacturing group with over 1,400 employees, providing unique solutions to businesses across various industries.

The other award winners include Ms Michelle Cheo, chief executive of agri-business Mewah International, who was named Outstanding Chief Executive Officer of the Year. She was lauded for cementing the group’s position among global palm-oil processors.

Ms Cheo was instrumental in pushing the privately-controlled family business to list on the Singapore Exchange in 2010. She also played a key role in the formulation and execution of strategies which contributed to the success of the group; some of the significant advancements include the group’s expansion into specialty fats, shipping, the biodiesel industry and the dairy sector.

Meanwhile, Mr Milton Cheng, global chair of law firm Baker McKenzie, was awarded Outstanding Overseas Executive of the Year. He started his career with the firm 30 years ago as a summer intern and worked his way up the ranks. He is the first Singaporean lawyer to be named chair of a leading global law firm, which operates 77 offices in 46 countries.

He founded Sheng Ye Capital in 2013. The company became the first commercial factoring company to be listed on the Hong Kong Stock Exchange in 2017. In the four years since its listing, the company’s total income has been growing at a compounded annual rate of over 40 per cent, with total cumulative assets exceeding RMB100 billion (S$21.1 billion).

Instant-coffee maker Food Empire Holdings clinched The Enterprise Award for its pioneering spirit in establishing itself in emerging markets. It has successfully anchored its MacCoffee 3-in-1 instant-mix brand in Eastern European markets like Russia, Ukraine, the Commonwealth Independent States and in Central Asia countries like Kazakhstan.

Mr Christopher Ong, managing director of DHL Express Singapore, said in a statement: “A leader is one who catches the vision, sets the course, and goes the distance. All of our winners today are leaders who have truly gone the distance and demonstrated that success can be achieved through resilience, tenacity and having a clear vision. Their ability to elevate their organisations despite these unprecedented times is an inspiration to us all.”

BT editor Wong Wei Kong, who chaired the SBA organising committee, added: “The SBA recognises business excellence, and we are heartened to see this shining through a second year of pandemic, which has put many businesses under severe stress.”