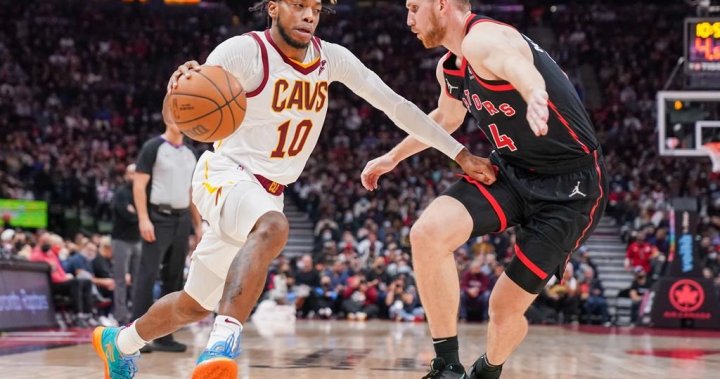 TORONTO – Kevin Durant had 13 of his 31 points in a decisive third quarter and the Brooklyn Nets stretched their winning streak to five games with a 116-103 victory over the Toronto Raptors on Sunday.

Durant added seven assists and seven rebounds in his first appearance at Scotiabank Arena since rupturing his Achilles tendon in Game 5 of the 2019 NBA Finals. James Harden added 28 points for Brooklyn (7-4).

Pascal Siakam scored 15 points in his first game in six months. The all-star forward missed the season’s first 10 games to recover from off-season shoulder surgery. VanVleet wrapped Siakam in a big hug before they ran onto the floor for warmup. Siakam received a warm ovation during the introduction of starters.

Gary Trent Jr. chipped in with 14 points while Precious Achiuwa had 13.

The Raptors led by seven points at halftime, but the Nets gathered momentum in the third, outscoring their hosts 35-17 in the period to take an 88-77 lead into the fourth in front of a capacity crowd of 19,800.

VanVleet hit a three-pointer with 4:52 to play to slice the difference to seven points, but Harden replied with back-to-back three-pointers for a 15-point lead.

Scottie Barnes stole the ball off Brooklyn on consecutive plays, his second leading to an Anunoby dunk that cut the lead to 111-103. But that was as close as Toronto would come.

The Nets were the consensus pre-season favourite to win the league this year, but have had their share of speed bumps. They’re missing star guard Kyrie Irving, who has refused to get the COVID-19 vaccine. The Nets have said he won’t play or practise with the team until he does.

Asked if the Nets were an early-season measuring stick for the Raptors, coach Nick Nurse said “Obviously they’ve had a little bit of changes, as they work through it, murky waters, we all go through it, they’re missing one of their key guys. It’s not unlike us, we’re getting back our guy (Siakam) today, so, is it a measuring stick?

“You know what? I’m in the mode of it doesn’t really matter who we’re playing right now. I really think that we’re one of those teams, we’re gonna go out and we gotta play our brand of really hard basketball.”

Hard basketball wasn’t quite enough against the star-studded Nets.

Durant led the way with 12 points in the first quarter, and his pullup shot late in the frame put the Nets up 29-26 heading into the second.

The highlights of the first half came in the final minute. Barnes stripped Durant of the ball twice. On the first he finished with a reverse dunk while glancing back at Durant. The second ended with a running dunk from Chris Boucher. Then VanVleet squeezed through Patty Mills and Durant to score on a reverse layup with 3.2 seconds left and the Raptors led 60-53 at the break.

“It’s a great day for me to be able to come back home, to be on the sidelines in this building against this franchise,” said the two-time NBA MVP and Victoria native. “With all the friends and family and people throughout the country watching, that’s something that I watched from afar since I retired and I’m really excited by the steps the Raptors have taken, obviously culminating in the championship.”

Nurse first met Nash back in the late ’90s when Nash – in England to visit his brother Martin, who was playing soccer there – asked if he could participate in the Manchester Giants camp, where Nurse was coaching.

“He’s obviously a great player, a great person, a really interesting basketball mind and, just in general, a leadership mind, too,” Nurse said.

The Raptors put their perfect 4-0 road record on the line when they play at Boston on Wednesday and Philadelphia on Thursday. They return home to host Detroit on Saturday.

This report by The Canadian Press was first published Nov. 7, 2021.