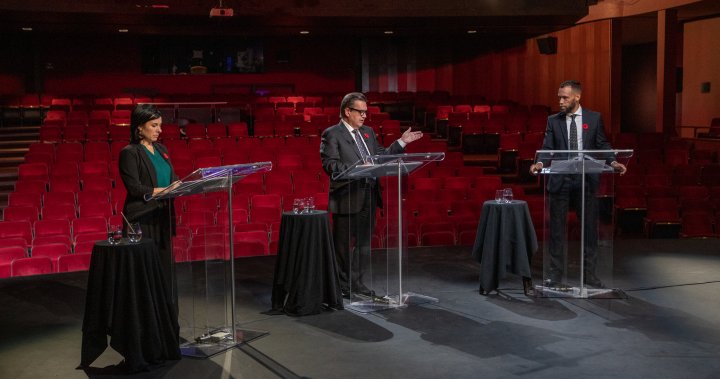 The three frontrunners in Montreal’s mayoral race faced off Thursday evening in the first and only English-language debate ahead of the Nov. 7 municipal election.

The participants were Projet Montréal’s Valérie Plante, the first woman to ever hold the city’s top job; Ensemble Montréal’s Denis Coderre who is attempting a comeback after losing to Plante in 2017; and newcomer Balarama Holness of Mouvement Montréal.

The debate was hosted by Global News’ Laura Casella, and the 90-minute affair focused on six topics including public safety, inclusion, the climate, transportation, the economy and housing.

In the most recent poll conducted by Léger for the Montreal Gazette, Plante and Coderre are in a dead heat at 36 per cent when it comes to voter intention. Meanwhile, 12 per cent of respondents said they would vote for Holness.

Here’s how things went during the debate on the first two topics.

Amid a recent spate of gun and knife violence in the city and shocking rise in femicides, Coderre took aim at both Plante and Holness on the issue of public safety.

“The reality is that you are for defunding the police, the same thing with Balarama. ” Coderre told Plante in the first part of the debate.

Plante shot back accusing Coderre of being the one who defunded police while he was in office.

While Coderre hopes to hire 250 more police officers if elected, Plante said she wants to strengthen community policing by having officers serve in the same neighbourhood for at least three years.

“This connection is so important,” she said, adding community ties are an critical crime prevention tool.

“We are about mixed squadrons, we are about helping community organizations, better training for police, de-escalation,” said Holness.  “There’s this idea that we can invest in firearms and police to solve these crimes and that is not the correct solution.”

2:05
Montreal mayoral candidates questioned on how they’d respond to racial profiling if elected

The issue of linguistic divide has been back in the spotlight as the provincial government seeks to reinforce and protect the French language in Quebec with its language reform law, known as Bill 96.

Holness portrayed himself as the defender of Anglo rights in the city.

“I’m the only one who rejects Bill 96,” he said, adding he will build a home for Montrealers where they feel safe. ” We need to recognize Montreal for what it is, a multicultural and multilingual.”

Read more:
Down to the wire in the Montreal mayoral race

Both Plante and Coderre, agreed the city is diverse and the rights of Anglophones need to be protected in accessing services.

When it came to the topic of inclusion of visible minorities, Plante pointed to her administration as being the first in Canada to create a bureau and hire a commissioner to fight systemic racism and discrimination. She said they’ve implemented a plan to hire 33 per cent ethnic minorities within the city’s workforce.

Holness balked saying there was a need for more honesty.

“The mayor didn’t say that it required 22,000 signatures, 300 community groups to force the mayor to recognize systemic racism,” Holness said.

On the environment, all candidates agreed it’s an issue that deserves immediate attention.

“I love the plan, I’ve seen the plan, but there’s no money behind it,” Holness said of Projet Montreal’s environmental platform. “That’s why we have not seen the ecological footprint of the City of Montreal go down over the last for years.”

Coderre agreed money is an issue.

1:59
Top Montreal mayoral candidates and where they stand on mandatory vaccinations

Top Montreal mayoral candidates and where they stand on mandatory vaccinations – Oct 14, 2021

“We need to have new eco-fiscal policies and we have to find other ways to get money,” he said floating the idea of green bonds.

Plante, however, said money wasn’t an excuse to not take action.

“I find it interesting because  both of you are talking about the climate crisis saying yeah we need to go get money somewhere else, when we can actually act here,” she said. “There’s money reserved through the climate budget or the housing budget.”

“I’m not going to wait for other levels of government to solve the problem here in Montreal.”

When asked by a viewer how the candidates would convince residents to take public transit in the city, both Plante and Holness pointed to the environmental benefits of doing so, and the role of public transit in reducing traffic.

Coderre, however, got sidetracked and talked instead about how the city’s public transit system was in trouble.

“We have a major problem of mobility in Montreal,” he said. “And now we are facing a deficit of $62 million at the STM and they are looking to cut 30 per cent of the services, so it’s clearly a mismanagement.”

He was brought to task by moderator Mutsumi Takashi, who reminded him to answer the question. Coderre said it would be possible to take public transit but that efficiency had to be brought back to the system.

The issue of streets clogged with traffic due to multiple construction projects was also a hot topic.

Plante countered the infrastructure work being carried out is necessary, although it might “not be sexy.” She agreed the projects could be better managed and that’s why the city had put in place a mobility squad. At the same time, Plante pointed out that 75 per cent of the orange cones are related to projects being carried out by other companies or private entities.

She also put forward the idea that all the construction was a sign of an economic upswing.

“We’re happy to see all the construction happening in Montreal, it shows how the economic recovery is going well,” Plante said.

Coderre jumped back into the debate saying the city’s mobility issues were due to fights between cyclists and cars.

“There’s no anti-bike (party) here, there’s only one anti-car (party) and it’s Projet Montréal. He accused Plante’s party of imposing its ideology by creating bike paths without carrying out public consultations.

Plante countered that the newly built St-Denis bike path, had not only made it safer for cyclists, pedestrians and motorists, but it had contributed to revitalizing the commercial artery.

“There’s 30 new shops that opened on St-Denis,” she added.

The topic of the economy opened up with the issue of taxation. Both Plante and Coderre said there would be a two per cent increase in taxes.

It quickly escalated with Holness accusing Plante of lying in the 2017 election campaign by promising that tax increases would stay below the rate of inflation.

Plante refuted the allegation and chided Holness for constantly attacking her.

“In this debate, people want to hear about ideas,” she said.

Plante defended her record and said the city froze taxes last year and cut expenses to provide relief during the pandemic.

The final topic of the evening focused on housing, with Plante quickly raising the issue of renovictions.

“Right now the flips are a huge problem, people get affordable housing and then they flip it and it’s gone,” she said.

Plante said her party had introduced a voluntary bylaw to protect against renovictions but that only boroughs led by Projet Montréal had adopted it.

“It’s not the case in Ensemble Montréal boroughs,” she said before going on the offensive.

“I find it very troubling that Mr. Coderre you talk about leadership, you talk about housing knowing that your candidate for mayor of Verdun is actually a professional flipper. He contributes to taking away some affordable housing for families.”

Coderre rebutted by saying there was a difference between renovation and renoviction and that the Projet bylaw made it difficult to renovate, leading families to leave.

“There are some young families who want to remain in Montreal, but because it’s too costly and because they cant’ renovate,” Coderre said.

Holness agreed renoviction is a problem and commended the Projet Montréal boroughs for moving forward on the issue. He also said the province would need to get involved to close certain loopholes in the civil Code that allow out of province companies to buy up properties, evict tenants and renovate.

In the most recent poll conducted by Léger for the Montreal Gazette, Plante and Coderre are in a dead heat at 36 per cent when it comes to voter intention. Meanwhile, 12 per cent of respondents said they would vote for Holness.

Among those polled, the top three campaign issues were rental costs and homeownership, the environment and the economic revival of the downtown area and commercial arteries.

READ MORE: Your guide to voting in Montreal’s 2017 municipal election

The web survey was conducted between Oct. 21 and Oct. 26, among 600 respondents aged 18 or older who are eligible to vote in the City of Montreal.