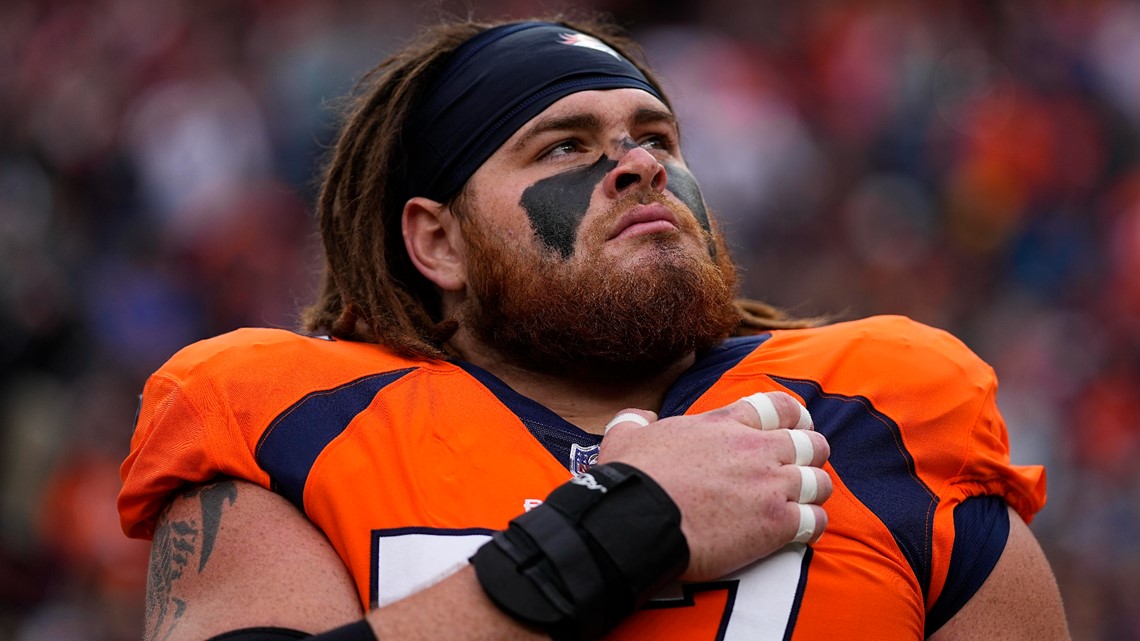 Meinerz is a rookie filling in for Graham Glasgow at right guard. Young is already a well-traveled fourth-year player bringing stability to inside linebacker.

ENGLEWOOD, Colo. — Often times as the NFL season reaches its midway point, injuries force a team to bring in a veteran stopgap at one position, and burn a so-called redshirt to turn the future into the present at another.

Quinn Meinerz as a third-round rookie who has gone from not playing a snap in the Broncos’ first two games to starting right guard from here on out. So serious is Meinerz about his opportunity, he put his “Belly” brand behind him.

“I’m a rookie, first of all,’’ Meinerz said in his first press conference of the regular season. “And second of all, I’m a professional now. I’m not going out looking for attention or anything like that. I want to lay low, earn my stripes and earn my place in the National Football League and earn myself a spot here on the Denver Broncos in the future.”

That’s the rookie attitude. It’s never good for a rookie to have an outsized persona or brand before he performs, especially when you’re an offensive lineman.

But people can still buy the “Belly of the Beast” T-shirts, right?

“No, the Belly shirts have been discontinued for a while, now,’’ Meinerz said. “It was just kind of a small thing I was doing with one of my family members back home. Maybe something in the future but I can’t comment on that right now.”

Kenny Young is a journeyman inside linebacker who was acquired two weeks from the first-place Los Angeles Rams and immediately helped the Broncos win his first two games here by filling a gaping position of need. Young is only 25, just three years older than Meinerz, yet is on his third team and is playing through the final year of his rookie contract.

He hopes he goes from stopgap to joining Meinerz as a future Bronco.

Asked if he can see himself with the Broncos long-term, Young said: “I actually do. After the first full week, I said, “Colorado, it’s really not bad of a place. I really can see myself here. Because I’m from the countryside of Louisiana so being out in L.A. for six years, it’s way calmer, still a lot of nature. Yeah, I definitely see myself here long-term. It’s a special place here. Great coaches, great players and just the atmosphere especially for a linebacker, a defensive player, this is one of the places you for sure want to be.”

Young is here because of season-ending injuries suffered by the Broncos’ season-opening starting inside linebackers, Josey Jewell and Alexander Johnson, and because their immediate replacements from within got run over by the Cleveland Browns in a Thursday night game. Meinerz has been promoted to starter because Graham Glasgow went down with season-ending ankle fracture at a time when another possible replacement, Netane Muti, was sideline with COVID-19.

Meinerz came off the bench last week and made a pulling, downfield block that helped Javonte Williams get a few more yards on a 30-yard run. Video of the play went viral.

“I know he’s a rookie just like I am, we’re going to make mistakes,’’ Williams said of Meinerz. “But he goes hard all the time. That’s why I like when he lead block for me.”

Young is working alongside another third-round rookie, Baron Browning, who took the other inside linebacker position following injuries to Jewell and Johnson. Browning missed practice Thursday, instead stretching and conditioning on the side.

“It’s helped our relationship as far as us connecting the dots on what he needs to hear most and what I need to hear,’’ Young said. “But I think for the most part we really gel well. He’s a great young linebacker, he’s learning, eager to learn. He plays hard. And I’m exciting with my experience, what I’ve learned over the past four years to pass on to him so he can take his game to a while other level.’’

George Paton will be among general managers personally scouting the Pitt-North Carolina game Thursday night at Pittsburgh’s Heinz Field. Both quarterbacks in the game, Pitt’s Kenny Pickett and the Tar Heels’ Sam Howell, have received first-round projections at various points in their college careers.

Paton has been grinding through work with a heavy heart. His father Tom passed away in hospice Sunday after a long battle with Alzheimer’s. The Broncos recently flew Paton and his family by private plane to southern California so they could say their goodbyes. …

Broncos running back Javonte Williams was named the NFL’s Rookie of the Week in a vote by the fans. Williams rushed for 111 yards in the Broncos’ win at Dallas with 30 coming on the remarkable tackle-breaking, Meinerz-pulling run in the second half. …

Guard-center Austin Schlottmann, promoted from the practice squad to 53-man roster on Tuesday, missed practice Thursday. A league source it was because of COVID-19 protocol. Schlottmann was not on the NFL transaction wire as being placed on the COVID-19 reserve list. The Broncos have had five other players test positive for COVID in the past 16 days – Netane Muti, Noah Fant, Drew Lock, Justin Strnad and Michael Ojemudia. Muti and Fant were activated Thursday. …

Rookie cornerback Pat Surtain II did not practice again Thursday. Neither did starting offensive tackles Garett Bolles and Bobby Massie because of ankle injuries. Left guard Dalton Risner also didn’t practice as his foot was stepped on in practice Wednesday but coach Vic Fangio indicated Risner would be fine for the game Sunday against the Eagles.