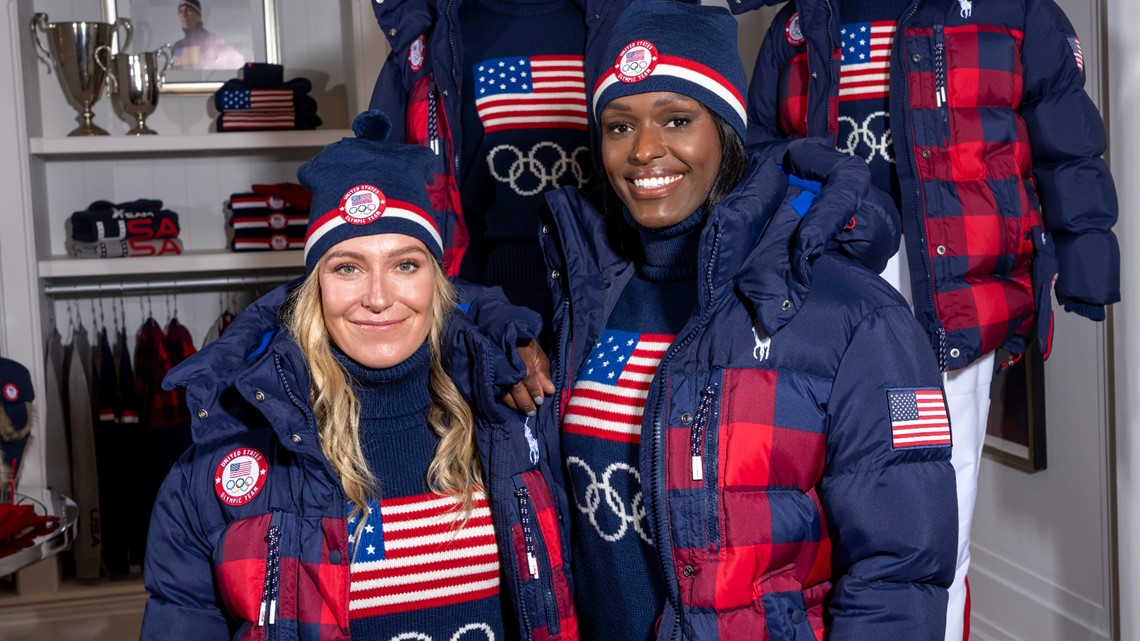 NEW YORK — With a buffalo plaid design and a nod to sustainability, Ralph Lauren on Thursday unveiled navy blue uniforms for Team USA to wear during the closing ceremonies of the winter Olympics and Paralympics in Beijing.

Just six months after the summer games closed in Tokyo, winter athletes are gearing up for China in February. After competition ends, they’ll be parading in a hooded puffer jacket with the red-and-blue plaid front and back. It’s made of recycled polyester and recycled down.

A white fleece pant for the men and fleece-lined leggings in navy for the women, along with gloves and sturdy boots, were also made with recycled polyester. The athletes will wear a turtleneck sweater in the same blue adorned with the American flag and the Olympic rings in white.

The sweater is made of responsibly sourced U.S. wool, the company said. That effort goes in hand with a Ralph Lauren promise to use only recycled wool or U.S. wool certified to meet the Responsible Wool Standard by 2025.

“We are highly invested in scaling sustainability solutions that have the potential to significantly reduce our and the wider industry’s impact,” chief branding and innovation officer David Lauren said in a statement.

In all, every piece was made in the U.S. Ralph Lauren has been an official outfitter of Team USA since 2008. The closing ceremony uniforms were unveiled 100 days out from the start of the Beijing Games.

The gear for fans evoking the Beijing designs went on sale Thursday at Ralphlauren.com, from red plaid duffels and backpacks to white puffer jackets in a bold Olympic ring print. There are tracksuits in the same graphic print and a range of hats, warmup gear and the same tie ankle boots in red or white that will be on the feet of Team USA.

A portion of proceeds from consumer sales of the collection supports the U.S. teams. More will go on sale pegged to the design of opening ceremony uniforms, to be rolled out after the new year.

Two-time gold medalist Jamie Anderson, a snowboarder who is among Ralph Lauren’s athlete ambassadors, was thrilled with the parade look as she prepares for an attempted three-peat. She also has a silver medal.

“I was just saying how cozy this jacket is,” the 31-year-old told The Associated Press at Ralph Lauren’s Madison Avenue showroom. “It just feels really good. Like, quality. You know they’re going to last forever, which is awesome.”

The jacket’s inside pocket was a hit.

Anderson spent her pandemic year cross-training in Whistler, Canada — her base. The down time helped her dig into surfing, mountain biking and skateboarding.

“Beijing doesn’t have the best snow in the world, unfortunately, but you kind of work with what you have and do your best,” she said. “Hopefully, the snow gods will come through.”

RELATED: Lost hiker ignored rescuers’ phone calls because it was an unknown number

For slopestyle, she’ll head to runs she can’t wait to try at the Genting Resort Secret Garden in the mountain town of Zhangjiakou City.

Bobsledder Aja Evans, who earned bronze in Sochi in 2014, retired after competing in 2018 in Pyeongchang, but she couldn’t stay away.

“In retiring I needed to take a step back and just figure out who I was as a person,” said the 33-year-old Evans. “So much of my adult life had been tied to my Olympic journey, and you get a little kind of confused as far as what you want to do.”

What she wants to do, she said, is continue to work with the children in her community on the south side of Chicago as she lives out her passion.

“I want to inspire and uplift,” Evans said.

As for the uniforms, she said: “I’m loving the plaid. It gives me a sort of ski resort vibe.”

Skier Ryan Cochran-Siegle, who competes in alpine, is heading to his second Olympics in search of his first medal. Skiing, the Vermonter said, is in his blood.

“My whole family, we were all skiers growing up. My grandfather had a small little ski area, just a tow rope and a T-bar. I was the youngest of my cousins and we all just kind of grew up loving it,” he said.

The plaid, said the 29-year-old, speaks to home.

“Yeah, in Vermont we have a good variety of plaid,” Cochran-Siegle smiled. “I have a good number of flannels.”