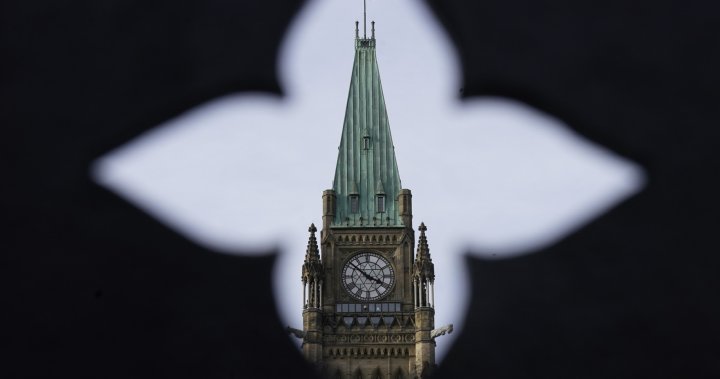 When is the right time to raise the flags lowered to commemorate Indigenous children who never came home from residential schools?

In just over one week, Canadians are set to mark Remembrance Day after a harrowing year-and-a-half that has seen the sacrifices of Canadian soldiers repeatedly invoked as examples of courage and bravery to emulate as the country has struggled under the weight of the COVID-19 pandemic.

While moments of silence, tolling bells and ‘The Last Post’ are all but guaranteed as part of the commemorations, there remain questions over when and whether the Canadian flags currently flying at half-mast on federal buildings across the country should be raised, in order to be lowered once more.

“There’s no consensus on this. It’s very, very sensitive.”

READ MORE: Flags on federal buildings to be lowered in honour of B.C. residential school victims

Prime Minister Justin Trudeau announced on May 30 in a tweet that he had ordered the flag on the Peace Tower over Parliament Hill as well as the flags on all federal buildings be lowered to half-mast.

He did so following the discovery of unmarked burial sites found at residential schools, where Indigenous children who were forcibly removed from their families frequently faced neglect as well as physical and sexual abuse. Thousands are believed to have died at the schools.

To honour the 215 children whose lives were taken at the former Kamloops residential school and all Indigenous children who never made it home, the survivors, and their families, I have asked that the Peace Tower flag and flags on all federal buildings be flown at half-mast.

The discovery of the unmarked burial sites has forced a national reckoning over the horrors of the residential school system and the Canadian government’s treatment of Indigenous people.

And while the work towards reconciliation is far from over, there are growing questions about when to raise the flags, when they should be lowered once more, and how best to mark the loss of Indigenous children forced to attend the schools in a longer-term, ongoing way.

“There is an understanding of how important it is to be able to lower the flags on Remembrance Day to mark our veterans, to mark people including Indigenous people who’ve stepped up to fight for Canadian values and made the ultimate sacrifice,” said Trudeau when asked about the matter on Tuesday.

“I’m confident that the conversations with Indigenous leadership on making sure we are able to lower the flags once again on Nov. 11 will come at the right solution.”

While on the campaign trail in September, Trudeau had also said, “I plan to keep those flags at half mast until it is clear that Indigenous Peoples are happy to raise them again.”

1:41
Trudeau says Canadian flags at federal government facilities to remain at half-mast until Indigenous people decide to raise them

Trudeau says Canadian flags at federal government facilities to remain at half-mast until Indigenous people decide to raise them – Sep 10, 2021

But Trudeau’s comments have also prompted concerns over whether he is unfairly putting the weight of a decision that needs to be made quickly on Indigenous communities and leaders.

The rules, in a technical sense, are clear: Trudeau used his discretionary authority as prime minister to order the flags lowered “until further notice.”

He is the one with the authority to approve them being raised back up again.

But the circumstance laid out by Trudeau goes beyond the letter of the rules themselves, and it remains unclear what consensus among Indigenous leaders might look like, and whether it can be reached in time for Remembrance Day.

Putting the weight of that decision on Indigenous people’s shoulders places them “under fire” amid a looming and very public deadline, said Groulx.

“It’s not really a fair position to be in,” she said.

Much of the difficulty, Groulx explained, lies in the reality that the Indigenous community is not a monolith — there are many different views and perspectives, and all of them are strongly held.

Some of the Indigenous people she has heard from said they feel the flag should be raised temporarily for Remembrance Day in order to be lowered back down, while others say raising it would be disrespectful. Others propose lowering the flags all the way down in order to raise them to half-mast.

“I’m afraid instead of concentrating on what’s important here, which is commemorating the children and the veterans, we’re going to be torn,” Groulx said.

“It’s a daunting task that’s been put on us with unfortunately not enough time to discuss.”

The Assembly of First Nations is set to meet with other Indigenous leaders and community members later this week to discuss their thoughts on the matter, and whether another symbol could be used to commemorate Indigenous children while allowing the flags to be raised.

In an interview with The Canadian Press on Saturday, AFN National Chief RoseAnne Archibald says the flags cannot be raised without an alternative.

1:48
Trudeau commits to lowering flags to half-mast every National Day for Truth and Reconciliation

Trudeau commits to lowering flags to half-mast every National Day for Truth and Reconciliation – Oct 18, 2021

Nujma Bond, a spokesperson for the Royal Canadian Legion, said the group will raise the flag at the National War Memorial on Nov. 11 in order to lower it to half-mast as part of the traditional commemoration.

The Legion has also recommended to its branches across the country to raise their flags for Remembrance Day in order to lower them, and that the branches can decide after that whether to leave the flags lowered for Indigenous children, or raise them back up.

“Both the flag and the veterans are the focus of the day,” she said. “The flag when it is at half-mast it is a huge symbol for veterans and Canadians to recognize and remember our fallen Canadian veterans and the sacrifices that they have made so that we can enjoy what we enjoy in terms of freedoms.”

She said while the Legion controls the site on Remembrance Day, the question of what to do with the flag before and after Nov. 11 is up to the government.

Groulx said ultimately, there needs to be time taken to find a respectful long-term solution for the flags and that right now, the decision is one that will ultimately fall on Trudeau.

“Our leader needs to be a leader,” she said. “He needs to stand up and do what he has to do.”

1:30
Some people concerned about flags being raised at Alberta legislature

Some people concerned about flags being raised at Alberta legislature