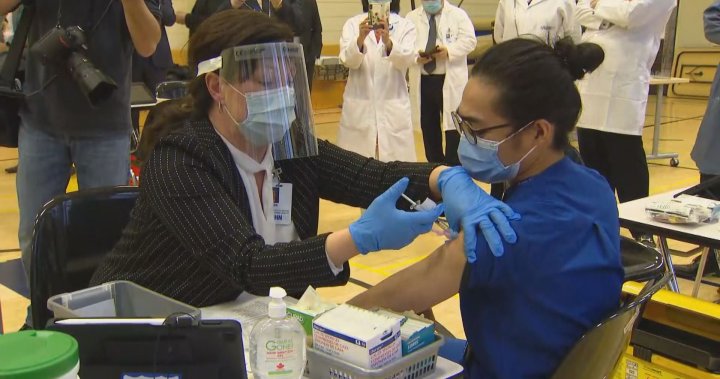 Canada’s National Advisory Committee on Immunization recommends seniors and other high-risk groups be offered a booster dose of COVID-19 vaccine, according to new interim guidance.

(2/7) NACI strongly recommends that adults living in long-term care (or other congregate settings that provide care for seniors) and adults 80+ should be offered a booster dose of mRNA #CovidVaccine at least 6 months after completion of a primary vaccine series.

A number of other populations “may” be offered a booster shot, the guidance reads. These include seniors aged 70 to 79, people who received two doses of the AstraZeneca vaccine or one dose of the Janssen vaccine, adults in or from First Nations, Métis and Inuit communities, and frontline health-care workers who have direct contact with patients and who received their initial vaccines with a short interval between doses.

More than 220,000 Canadians received two doses of AstraZeneca’s vaccine, according to data from the Public Health Agency of Canada.

A handful of provinces and territories have already announced that they will offer booster shots to certain populations, including British Columbia, Yukon and Northwest Territories.

Read more:
British Columbians to be eligible for COVID-19 booster shot 6 to 8 months after second dose

On Friday morning, Ontario’s Health Minister Christine Elliott said on Twitter that the provincial government would release information next week on when Ontarians can expect their booster dose.

Next week we intend to release our plan that will provide information to all Ontarians on when they can expect to receive a third dose of the #COVID19 vaccine. https://t.co/NUWTjOg8cA

Either mRNA vaccine, Moderna or Pfizer-BioNTech, can be offered as a booster dose, NACI says.

The organization said it made its decision based on evidence showing that immunity provided by the vaccine could wane over time.

“Evidence suggests protection against infection decreases as time since completion of the primary vaccine series increases,” the guidance says.

“Studies suggest that a booster dose of an mRNA COVID-19 vaccine produces a very good immune response that is generally higher than the immune response after the primary series, has a favourable safety profile, and provides good short-term protection against infection.”

Dr. Theresa Tam, chief public health officer of Canada, said the evidence shows that some people might need a third shot to increase their protection against COVID-19.

“While COVID-19 vaccines in use in Canada continue to be very effective in protecting most people against serious illness due to COVID-19, emerging evidence suggests vaccine effectiveness against infection may decrease over time in some situations,” she said at a press conference Friday.

Recommendations for First Nations and other Indigenous communities were made taking into consideration some other factors — like overcrowded living conditions — that might make people there more vulnerable to COVID-19, Tam said.

With regard to boosters for people who received the AstraZeneca or Janssen vaccine, she said, these vaccines had lower effectiveness to begin with, “and these vaccine recipients may be susceptible to infection sooner.”

Some health-care workers also got their two doses with a very short interval of less than 28 days in between, she said, and evidence so far indicates that a longer interval provides better protection.

However, she noted that so far, the committee has not found evidence that the general population should get a booster shot.

She emphasized the importance of getting more Canadians their first and second doses, rather than focusing on boosters.

“Getting more people to complete their two-dose primary series remains a key focus of the immunization efforts in Canada,” she said.

—with files from The Canadian Press