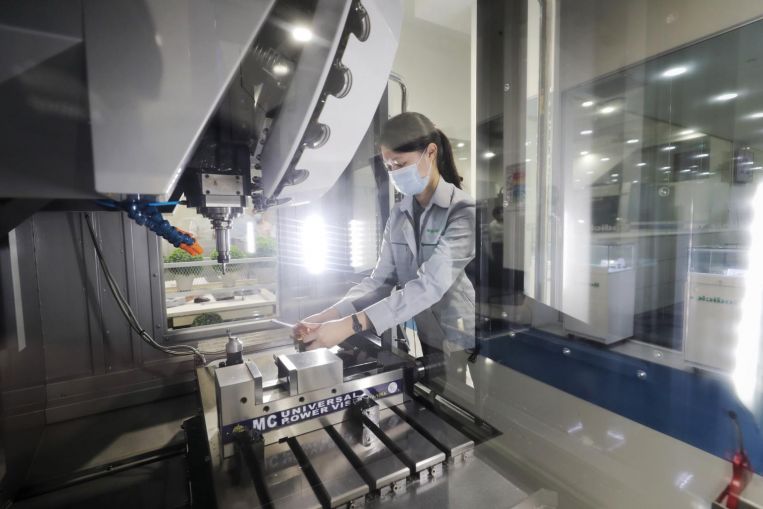 SINGAPORE (THE BUSINESS TIMES) – Business optimism among local firms remained positive into the final stretch of 2021, although manufacturers’ optimism has receded quarter on quarter, even as firms in the services sector took a rosier outlook.

A net weighted balance of 16 per cent of manufacturers expect conditions to be better for the next six months to March 2022 than in the third quarter, according to a survey from the Economic Development Board (EDB) on Friday (Oct 29). That is a step down from the 20 per cent seen in the previous poll in mid-2021.

At the same time, the net weighted balance of services firms expecting a more favourable business outlook picked up to 19 per cent from 11 per cent previously, in a similar survey conducted by the Department of Statistics (SingStat).

The net weighted balance, used to gauge business sentiment, is the difference between the weighted shares of positive and negative responses.

In manufacturing, a weighted 22 per cent of businesses pointed to better business conditions in the six months, down from 26 per cent previously, while the weighted share of companies forecasting weaker business was unchanged at 6 per cent.

Electronics manufacturers led the sector for optimism, with a net weighted balance of 27 per cent of companies expecting business to improve, which the EDB attributed to the “semiconductors segment which continues to expect robust demand from the 5G market, cloud services and data centres”.

Still, this was a sharp decrease from 40 per cent before, as the mood turned negative in the computer peripherals and data storage, and other electronic modules and components segments, and stayed neutral in infocomms and consumer electronics.

In precision engineering, the net weighted balance of upbeat firms eased to 10 per cent from 15 per cent before, despite support for metal stamping, bonding wire, metal precision component and semiconductor-related equipment from robust global semiconductor demand.

“Many precision engineering firms have expressed concerns over longer shipment lead time and rising costs due to supply-chain bottlenecks,” the EDB warned.

Similarly, the net weighted balance of chemicals manufacturing companies expecting improved conditions picked up to -3 per cent, from -24 per cent 3 months prior, even though the mood was still negative in the cluster.

In employment, a a net weighted balance of 11 per cent of manufacturers are eyeing a bigger headcount in the next three months, from 8 per cent in the last poll, amid hiring optimism in biomedical manufacturing and electronics. That is even as a weighted 71 per cent expects year-end employment levels to be roughly the same as in the third quarter.

On the services front, a net weighted balance of 25 per cent of firms held a positive outlook, up from 20 per cent before, while 6 per cent forecast a deterioration in the next 6 months, easing from 9 per cent previously.

The cheer was widespread across the entire sector, although it was the highest in the transport and storage industry, where the positive net weighted balance surged to 35 per cent, from 10 per cent previously.

Optimism also picked up strongly for the finance and insurance industry, and retailers and accommodation services. Food and beverage (F&B) was back in the black at 13 per cent, against -9 per cent before.

The anticipated improvement in retail and F&B services come ahead of year-end festive spending, with department stores, supermarkets, and clothes and shoes retailers among the more upbeat segments, SingStat reported.

It added: “Hoteliers expect more business due to the easing of global travel restrictions and more bookings for staycations during the upcoming year-end holidays.”

SingStat also singled out optimism in the wholesale trade industry, as fuel wholesalers tipped “better business due to an increase in fuel prices and demand for fuel products”, although the net weighted balance slipped to 20 per cent, from 26 per cent before.

Overall, a net weighted balance of 16 per cent of services firms projected a quarter-on-quarter increase in fourth-quarter revenue, up from 9 per cent previously.

A net weighted balance of 10 per cent expect hiring activity to pick up – especially in retail, accommodation and F&B – against 3 per cent in the 3 months prior.