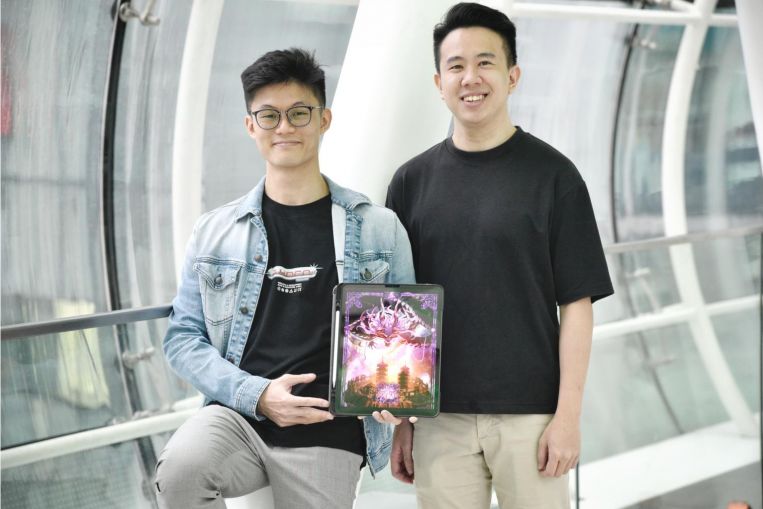 SINGAPORE – A team of Singapore enthusiasts made nearly $1.4 million in cryptocurrency in just over an hour after it launched a series of digital trading cards tied to non-fungible tokens (NFT) online.

These cards can never be held physically and can be seen only on a screen, yet the Dark Zodiac team sold all 3,876 units when it launched the project on Sept 26.

The debut is another notch on the belt for Singapore’s fast-growing NFT scene, despite controversy and scepticism that the craze is a bubble waiting to burst.

NFTs work as a proof of ownership that is attached to an object – such as an artwork, a video or even a tweet – and authenticated by blockchain.

The token is sent to the buyer’s cryptocurrency wallet, so no physical transaction takes place.

The art world was shaken in March this year when Singapore-based technopreneur Vignesh Sundaresan, better known by his alter ego Metakovan, spent a record US$69 million (S$93 million) worth of cryptocurrency on an NFT work by digital artist Beeple.

Earlier in the year, the NFT scene was dominated by two-dimensional artworks like the famous CryptoPunks, which have sold for millions of dollars.

This was when Dark Zodiac art director Marc Yap, 26, saw an opportunity to break into the NFT scene by drawing on his experience with three-dimensional production in school.

“2D artwork was going crazy when I was getting into NFTs. I felt I could do something different from the market back then that wasn’t 2D, something impressive for everyone to see,” says the final-year student at the School Of Art, Design and Media at Nanyang Technological University.

Within 60 days, he built 60 computer-generated sculptures of monsters inspired by Chinese zodiac mythology and creatures from his favourite fantasy video games such as Dark Souls and The Witcher.

Project lead Alan Seng, 28, left his job at a tech start-up to commit full-time to Dark Zodiac in August, after investing $30,000 in its marketing, software and research.

Mr Seng first approached Mr Yap with the idea to start an NFT project, which kicked off in May. It now has nine team members, including designers, software engineers and marketeers.

In order to sell NFTs, Mr Seng believed the key was to build a community around the work. So the team reached out to well-known NFT commentators and promoted its upcoming project through communication platforms such as Discord and Twitter.

The team expected to sell around 60 per cent of the more than 3,800 NFTs it had prepared for the launch. But the entire collection sold out in 80 minutes.

“It was a crazy night,” says Mr Seng. “We were all excited about the sale itself but didn’t expect much, given that we were not an established brand.”

“They plugged into the right online communities and platforms early and I think their efforts paid off,” says Ms Chong, 37, who has been in the art industry for more than a decade.

She has seen more artists dabbling in NFTs of late as they are generally low in cost to produce and can be released to a global audience online, unlike artworks in traditional galleries.

“The challenge is the speed at which people want the NFTs. There is no time to pause because people are awake in different parts of the world and they want new details,” she says. “It’s a different ball game.”

Art curator Khai Hori, 47, is not surprised by Dark Zodiac’s sales as these figures have become “normal” in the NFT scene.

“I think it would connect with Chinese collectors. The demographic is huge and they are not dependent on Singapore collectors only,” says Mr Khai, who is working on an upcoming exhibition in Paris and Singapore called The Weight Of Water, which incorporates NFT designs.

He adds that the NFT community has been growing rapidly over the past year as more collectors learn about the technology. “They may make a million today, but no one knows. People in this space know this and take the risk.”

Mr Seng says the team’s earnings will be used to develop a new digital trading card game platform where buyers can play the Dark Zodiac cards with others. He hopes to launch a first trial by January next year.

The prices of many cards have ballooned in the resale market, with some surpassing $4,000 in value as of Wednesday (Nov 3).